The former Sheffield Wednesday double-act joined Celtic in £250,000 development fee moves in the summer as part of the massive squad rebuild.

The likes of Kyogo Furuhashi, Filipe Jota, Liel Abada, Carl Starfelt and Cameron Carter-Vickers are already first-team regulars and 34-year-old ex-England international keeper Joe Hart has played every minute of 18 games after making his debut in the 4-2 win away to FK Jablonec only 48 hours following his £1million switch from Spurs. 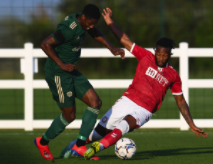 DUTCH AND GO…Osaze Urhoghide in action against Bristol City in the friendly at Ashton Gate in July.

However, Shaw and Urhoghide are still waiting to make an appearance in the top side and November and December will be key months as they aim for a place in Postecoglou’s revamp.

Neither of the one-time Hillsborough prospects could even get a place on the Hoops’ bench for the 2-0 win over St Johnstone at the weekend.

Both defender Urhoghide and midfielder Shaw could seek loan moves in January if they continue to be kept out of the Parkhead picture, according to a report in the Scottish Sun.

The players, under contract until 2025, have failed to impress Postecoglou and have dropped down the pecking order.

Urhoghide, 21. and Shaw, 20, face stiff opposition to get into the first team and the Dutch defender was overlooked in July when the manager gave the nod to 18-year-old Dane Murray to face FC Midtjylland in the Champions League qualifiers.

Prior to their arrivals, Urhoghide had played 21 games for Wednesday while Shaw had turned out on 24 occasions.

A temporary switch in clubs may be the answer at the turn of the year for the youngsters to get some crucial game time.