AC MILAN have been given no encouragement from Celtic in their reported interest in Odsonne Edouard – and the Italian giants are now lining up a shock big-money raid elsewhere.

The Serie A cracks, who beat the Hoops home and away in the recent Europa League Group H games, will switch their attention to Crystal Palace forward Wilfried Zaha.

The San Siro aces are desperately seeking firepower as they aim to win their first title in 10 years. They are ready to make a swoop in next month’s transfer window with Swedish superstar Zlatan Ibrahimovic’s long-term fitness a concern.

Edouard, the Hoops’ top scorer last season with 28 – or 29 if you include his penalty-kick in the delayed Scottish Cup Final against Hearts – has impressed the Italians and scored in the 4-2 loss in Milan, but Zaha now appears to be their priority target, according to a report in England.

The 28-year-old Ivorian international has scored eight goals in 14 outings for the Selhurst Park side since manager Roy Hodgson moved him to a central attacking position. The gifted forward, who normally plays in wide roles, is on course to beat his previous striking record for the London club which was 10 in 2018/19. 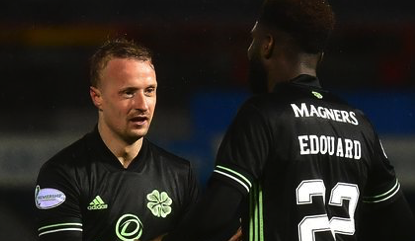 TWIN THREAT…Leigh Griffiths and Odsonne Edouard who were both on target against Hamilton Accies.

His latest goal – a brilliant volley – came in the 1-1 draw with Brendan Rodgers’ Leicester City.

Zaha’s age is of no consequence to AC Milan who didn’t hesitate to deal in Henrik Larsson’s pal Ibrahimovic at 39 in the summer. The club are willing to splash the cash in their all-out efforts to end the nine-year domination of Juventus in the Serie A.

Ironically, Celtic are bidding to make history with their own decade of success and that is the main reason they have issued hands off warnings to any clubs showing an interest in 22-year-old Edouard who is under contract until June 2022.

He cost a club record £9million when he joined from Paris Saint-Germain in the summer of 2018 after an outstanding season-long loan deal from the French club.

The flamboyant frontman was the centre of intense transfer speculation in the summer which looks to have affected his form in the current campaign with only 10 strikes and some less-than-impressive performances.

However, he showed up with some excellent touches and a penalty-kick goal in the 3-0 win over Hamilton Accies at the weekend to draw applause from Neil Lennon and his team-mates.

The champions are hoping he continues to dazzle against Dundee United at Parkhead tomorrow afternoon as the curtain comes down on 2020 and the fans’ favourite hits the ground running in 2021 when the Hoops play at Ibrox on Saturday.