Celtic Quick News on News Now
You are at:Home»Latest News»EXCLUSIVE: ‘BIG JOCK WOULD HAVE GONE UP THROUGH THE ROOF,’ ADMITS LEGEND
By CQN Magazine on 21st October 2020 Latest News

CELTIC legend John Hughes reckons his old club cannot afford any more slip-ups in their quest for the historic 10 in a row.

The club’s seventh-highest goalscorer with 189 strikes is concerned over the stuttering form of the champions in what manager Neil Lennon has already termed “a monumental season”.

Big Yogi, a fans’ favourite at the club in the sixties, had his say about forwards Patryk Klimala, Mohamed Elyounoussi and Albian Ajeti in an interview with Celtic book author Alex Gordon in a CQN EXCLUSIVE yesterday.

He follows on today with his verdict on more Bhoys who have been brought in to help the club claim another coveted place in the annals of fame at Parkhead.

Hughes, now 77, told CQN: “I watched the game against the Govan club on Saturday and, like everyone else, I was far from impressed with what I witnessed.

“It was quite distressing to see a Celtic team with little fight or appetite for battle. What would Jock Stein have made of a performance like that? He would have gone up through the roof!

“I have to say I thought Neil Lennon was remarkably subdued while Shane Duffy and Kristoffer Ajer shuttled the ball around in defence, playing square passes when it was screaming out for the team to go forward. 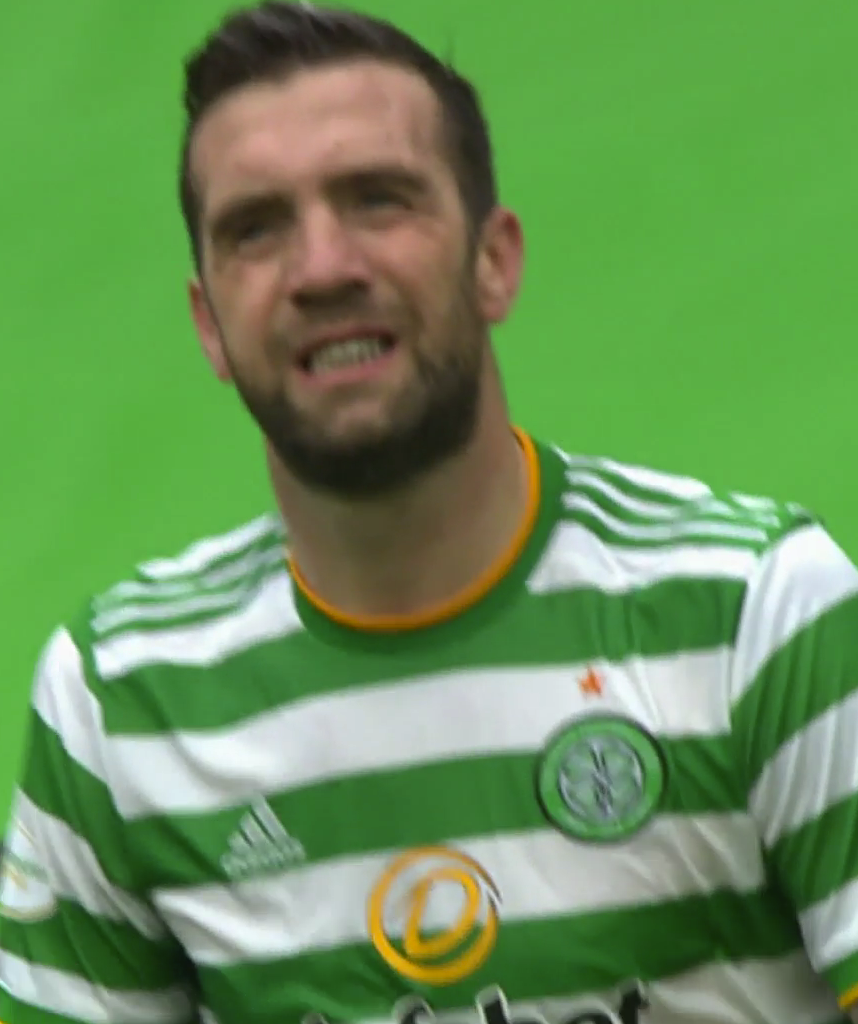 NO PASSMARKS…Shane Duffy displays his anguish during his derby debut defeat.

“I understand possession play. I can also detect a lack of urgency. While Celtic played it across the backline, Steven Gerrard’s team were allowed to filter back and take up positions.

“I hate to say it, but it looked all far too easy for them. Gerrard was quick to say his team had won without having to be at their best. Obviously, subtlety is not his strong point, but we all got the message. And, sadly, it was difficult to argue with him.

“I don’t think Celtic brought in Shane Duffy for his Franz Beckenbauer qualities of being able to take the ball out of defence with a nonchalant ease or play defence-splitting long passes.

“Clearly, that is not his strength. He shelled one out of play near the end that actually had Lennon throwing his arms up in despair. The defender was under absolutely no pressure yet he simply turned and battered the ball into the stand.

“I’m not having a go at the big lad and I am sure he will come good. But he will have to brush up on his technique.

“Celtic defenders get a lot of the ball in their own half and knocking it sideways on countless occasions just doesn’t cut it.

“As I say, Big Jock would have been frothing at the mouth at the lack of guile and vigour from his defence. In my day, the full-backs, whether it was Tommy Gemmell, Jim Craig, Davie Hay or whoever were ordered to move forward with their first touch.

“That was cast in stone. You won’t see too many images of Big Tommy or anyone else casually knocking passes inside to Billy McNeill or John Clark. They were told to immediately get on their bike and take the play to their opponents.

“I didn’t see any of that on Saturday. I am not pointing any fingers at Stephen Welsh or Diego Laxalt. It was only the youngster’s second appearance and it was a debut for the on-loan AC Milan defender and his first game since July. It showed. 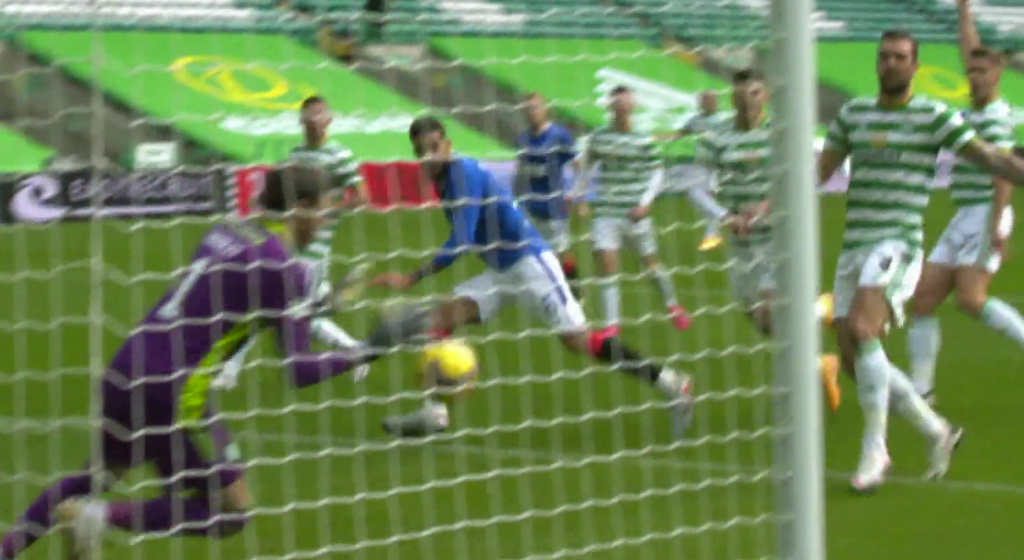 OOPS…Vasilis Barkas is about to allow Connor Goldson’s cushioned header elude him for the opening goal.

“He got forward quite a bit in the first-half and slung in a few crosses, but they never came remotely close to a Celtic player. There are some wing-backs who believe they have done their job if they just deliver a cross into the opposition penalty area.

“Take a look at Andy Robertson at Liverpool. He storms forward all the time and picks his passes into the box. They can be high, low, near post, back post. It is not enough for Andy to merely put the ball into the danger zone.

“I realise he is an exceptional player, but he is still someone others in his position can look at and see if they can pick up any hints.”

Hughes continued: “Vasilis Barkas worries me, I have to admit. Last season, we had no problems in that position with Fraser Forster in charge.

“Let’s face it, he is a hard act to follow, but the new keeper has not done enough to show me is Celtic quality. Not yet, anyhow.

“He got a touch, but I believe that cushioned effort was utterly saveable. A good save so early in the game would have worked wonder for his confidence.

“So far we are all waiting for that big and important save that can turn games in the team’s direction. I thought he looked slow to react to Ferencvaros’ first goal, too. It was a well-hit effort, but it was from a fair distance and his reactions did not impress me. 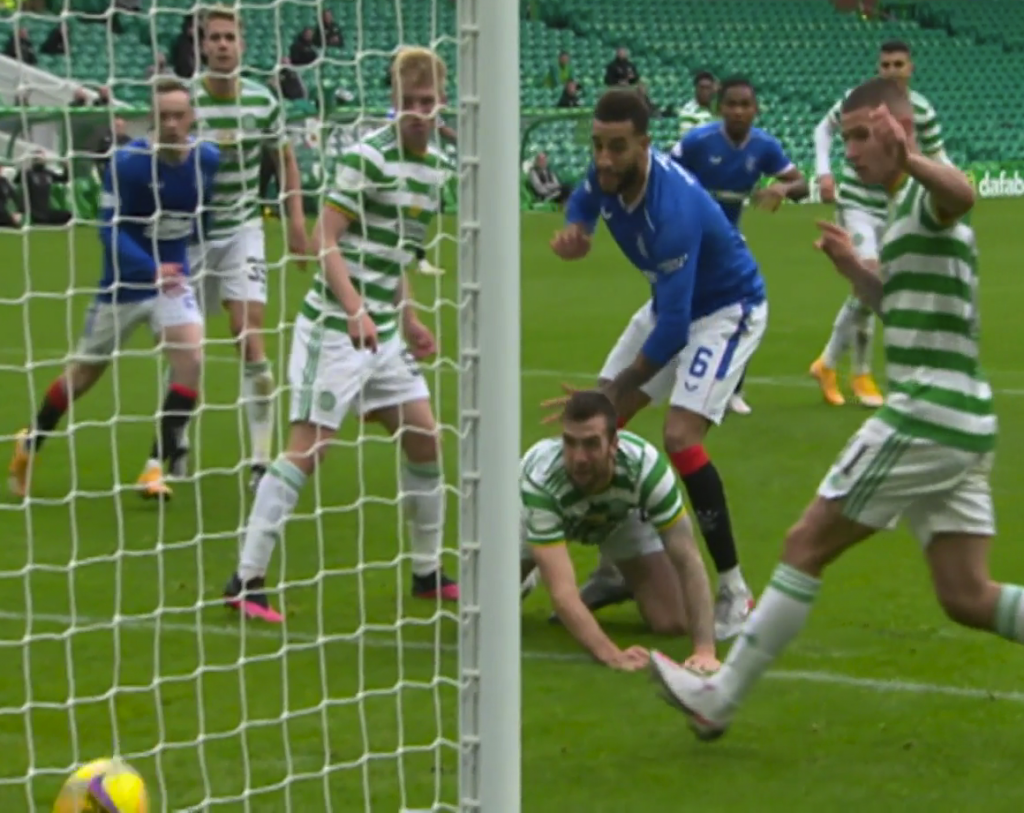 THAT SINKING FEELING…Shane Duffy gets a close-up view of Goldson’s second goal while Stephen Welsh and Patryk Klimala watch.

“Similarly, Livingston’s second goal in the 3-2 win last month. That was struck from about 30 yards and it was just above his head as it went into the net.

“So, I reckon there is a lot of work to be done at Lennoxtown for goalkeeing guru Stevie Woods to get Barkas up to speed.

“David Turnbull? Well, we all know he is a good player, he demonstrated that often enough as he was emerging a couple of seasons ago. I like the look of the lad and he may yet have an important role to play this season.

“Ryan Christie scored 19 goals last time around which is a phenomenal amount of strikes for a midfielder. As usual, his form has attracted attention from English clubs and we have to go through the boring rigmarole of the player maybe going out maybe staying.

“He has to focus completely on his football. Celtic have been paying his wages for five years and loyalty cuts both ways.

“This is a time for real Celtic men to stand up and be counted.”

TOMORROW: What next for Lenny?