Celtic Quick News on News Now
You are at:Home»Latest News»FORREST REVEALS HOW HOOPS REIGNED IN THE RAIN
By CQN Magazine on 12th July 2019 Latest News

JAMES FORREST and his Celtic team-mates weathered the storm in Bosnia as they overcame FK Sarajevo 3-1 to edge towards the Champions League second qualifying round.

The Scotland international winger and the Hoops faced monsoon conditions and the loss of a shock goal before reigning in the rain as they prepare for the return leg at Parkhead on Wednesday.

Forrest, speaking to the Scottish Sun, said: “In European games, you learn to expect the  unexpected and you don’t think it will be like that in July.

“You expect it to be really hot, the way it was in Austria and Switzerland when we went on tour.

“The boys had all been checking the forecasts and it had been in the 30s. Then you arrive at the stadium and the weather was worse than it was in Glasgow.

“The rain was heavy and the pitch was cutting up, but we dealt with it very well. 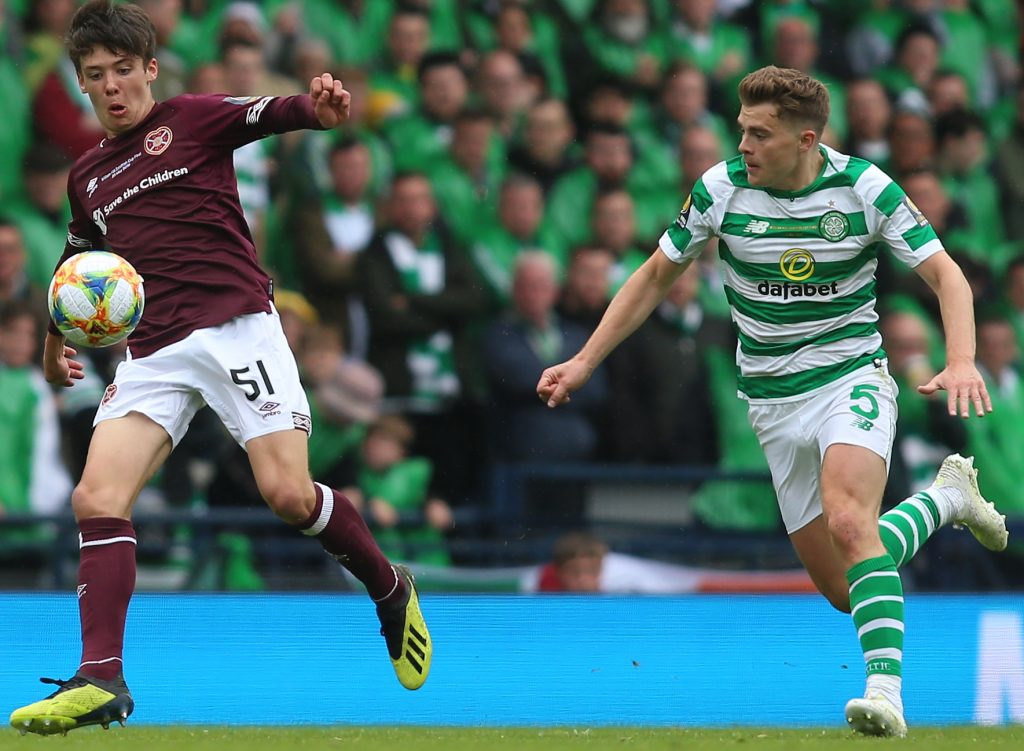 ON THE RUN…James Forrest in a duel with Hearts defender Aaron Hickey as Celtic head for a Scottish Cup Final success in May.

“To get three goals away from home is great, no matter who you are playing.

“The aim was to leave with a positive result, but to get that advantage on a night like that was a real boost.”

Despite the loss of a sloppy goal following some dreadful defending from a left-wing corner-kick, the champions refused to push the panic button in Bosnia.

Forrest said: “It was the first competitive game of the season and it’s natural that it takes you a while to get started.

“But once they scored we started to play. It actually helped us. Mikey Johnston’s goal got us going and we could have won by a lot more in the end.”

FK Sarajevo now require THREE goals in the east of Glasgow in midweek to turn the tie on its head and create a sensation. You will get long odds on that happening, but, nevertheless, the prolific touchline raider and his colleagues are taking absolutely nothing for granted.

The anguish of failing to overcome an average AEK Athens side last season and missing out on the opportunity of performing in the group stages of Europe’s elite competition still weighs heavily at Parkhead.

Forrest added: “Nobody in the squad thinks it’s done. The last thing we want to do is go into the second leg and produce a laboured performance.

“We will be stronger and fitter after the Rennes game on Saturday and another week of training.

“The second leg is an important tie and we will be looking for another win and strong performance.”