Celtic Quick News on News Now
You are at:Home»Latest News»‘I WOULD HAVE WALKED,’ ADMITS SUTTON AS PRESSURE PILES UP ON LENNY
By CQN Magazine on 22nd January 2021 Latest News

CHRIS SUTTON admits there is NO way Neil Lennon will quit as manager of Celtic.

The defiant Irishman insisted he will not walk away after the frustrating 2-2 draw with Livingston in midweek left the champions 20 points adrift at the top, as CQN reported yesterday.

Only a spectacular and sensational somersault in form will see the Hoops successful in their bid for a historic tenth consecutive title which looks in jeopardy with 2021 still brand new.

The club have dropped an extraordinary TWENTY points from 22 games – exactly DOUBLE last season after 30 outings  when they clinched a premature championship amid the coronavirus lockdown. At that stage, they led by 13 points with only eight matches to play.

This term, however, has turned into the campaign from hell with the inexplicable collapse in form that sees the team still waiting for their first win this year after four attempts in which nine points from 12 have been squandered in a loss at Ibrox and draws against Hibs and Livingston (twice).

There is increasing pressure on Lennon to leave, either voluntarily or sacked by the hierarchy.

The boss, who has won ten crowns at Parkhead, five as a player and five as a manager, is rightly lauded as a club legend, but things have gone drastically and dramatically awry this time around.

Knocked out of the Champions League, the Europa League and the Betfred League Cup before the turn of the year and a nosedive in the Premiership is the sort of chaotic form that has placed Lennon between the rock and the hard stuff.

The quadruple treble was delivered last month following a nervy penalty-kick shoot-out triumph over Championship Hearts in the delayed Scottish Cup, but it is the here and now that is worrying anxious fans.

His former team-mate Sutton reckons there is no way of turning things around and, speaking to the Daily Record, said: “Resolute Neil Lennon has every right to stand his ground.

“If Celtic want change, it’s down to Dermot Desmond and Peter Lawwell to make it.

“There seems no way of Neil managing to get through this current malaise. In my eyes, it’s too far gone.

“The brief flurry before Christmas has evaporated. Seven wins in the last 22 games tells you everything you need to know.

“But do you know what? I don’t blame Neil for fighting on. He was a ferocious competitor as a player who never gave up. It was his greatest strength and why the Celtic support adored him.

“So, why are we expecting him to show a different characteristic now?”

Sutton, now a top media pundit, continued: “If it was me, I would have walked to protect my legacy, but everybody has to make choices based on how they see them.

“In any industry, if you are under contract and believe you can still do the job competently, then you would fight on. Neil is doing that.

“He can’t let go, he doesn’t want to let go. Neil is his own person and as stubborn as a mule. He’s not for budging.

“It’s not even a 50/50 call amongst most fans now. Not even 90/10 in terms of backing. If he goes into next season, how much latitude would he have? Virtually none.

“That will hurt. That will kill him inside. The club he’s devoted nearly half his life to he doesn’t want to give it up. I get that, we would all feel this way, would we not?

“When Neil walks out of the door this time, it will be for the last time in an official capacity. That will also hurt.

“Whether you feel he could save it or think he is doing an awful job and it’s beyond him, you cannot say he is not committed to the club. 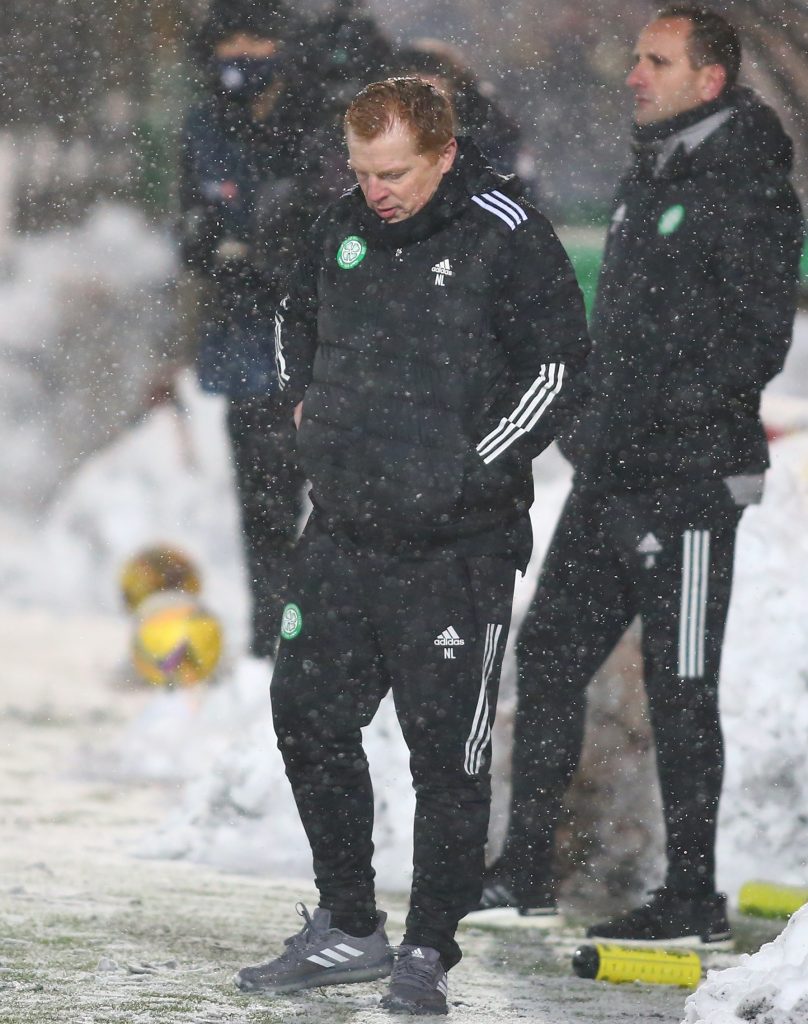 “He’d have to be dragged kicking and screaming out of there. You can’t employ a fighter who never gives up and then expect him to stop fighting and give up.

“This is their problematic situation to solve. It’s not down to Neil. It is for those at the top.

“Neil has made mistakes this season. Plenty of them. But if he fails, it won’t be for lack of effort or lack of pride.”

Sutton added: “It’s what happened subsequently at Livingston which makes criticism of him football-wise fully justified.

“Failure to beat a team which had left out some key men ahead of a semi-final is unpalatable.

“In isolation on a snowy night, maybe. But it’s not isolation. It’s now the norm.

“Godawful defending at a set-piece for the umpteenth time this season for the loss of the first goal. Failure at source to stop and then deal with a cross for the second goal. Failure to take chances and openings at the other end.

“Bad decision making at a key time and a lack of discipline which was evident in the Scott Brown red card.

“These are not one-off moments. This is symptomatic of a season.

“It’s why what happens next at Celtic is not down to him. It’s down to the directors, the people in charge.

“If they still believe in Neil, say so. I suspect they don’t have the faith in John Kennedy and Gavin Strachan to run it or they’d probably be doing so by now with the hunt underway for a new boss.

“Quite simply, if Celtic’s chiefs want a change, it’s up to them to make it. It’s not up to Neil to go.”