KILMARNOCK boss Steve Clarke has hailed Celtic for their historic achievement of back-to-back trebles plus their Betfred League Cup success on Sunday.

However, the Ayrshire outfit’s gaffer is determined to emerge from 90 minutes at Parkhead tomorrow unbeaten in his FIFTH head-to-head meeting with Brendan Rodgers.

Clarke has seen his Premiership pacesetters defeat the champions twice at Rugby Park – 1-0 last season and 2-1 in this campaign – and force two draws – 1-1 and 0-0 – at Parkhead last term.

As he prepared to take his team, a point ahead with the Hoops having two games in hand, to the east end of Glasgow, the former international defender said: “You only have to look at the last seven trophies that have been up for grabs in Scotland since Brendan came to Celtic.

“Celtic have won them all, so it’s going to be difficult.

“I think what’s happened this year is that it seems to be a little bit more competitive.

“There are still a lot of games to go and there is still time for the so-called bigger clubs to pull away.”

Clarke is making no promises, but insists the Killie fans should be “allowed to dream” with the club leading the league for the first time since 1998.

He added: “I know a lot of people in the area who are happy just now. I know there are many Kilmarnock fans who are, if you like, not living the dream, but are dreaming about the possibility that we can do great things. 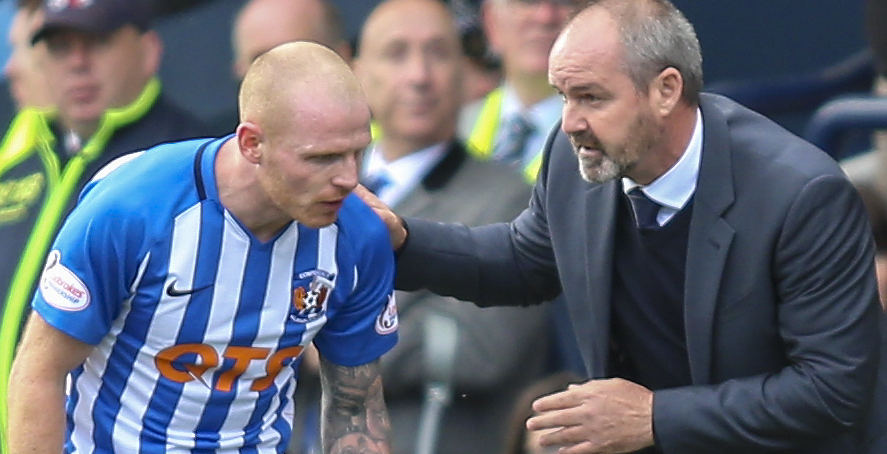 A WORD IN YOUR EAR…Killie boss Steve Clarke passes on instructions to Chris Burke.

“We have to keep our feet on the ground. It’s a difficult game tomorrow and all I look for is that we meet our high standards and if we do that then you never know.

“The best way to enjoy football is to win matches. The group of players I’ve got here have bought into that philosophy. They work hard every day and at the moment they are getting their rewards on the pitch.”

Rodgers’ men have found Killie problematic since Clarke arrived and that was emphasised last season when Youssouf Mulumbu, who joined the champions in the summer, claimed the only goal on the treacherous artificial surface at Rugby Park.

Similarly, the champions did not seize the initiative in September after Leigh Griffiths had dived full-length to head in the opener.

Craig Gordon was bamboozled by a 20-yard bouncing drive from Chris Burke for the leveller and ex-Celtic prospect Stuart Findlay headed in the winner in stoppage time.

After dropping two points to Motherwell at Fir Park in midweek, it is imperative there are no slip-ups tomorrow.