ANGE POSTECOGLOU has paid a personal tribute to Celtic great John ‘Yogi’ Hughes who passed away on Monday at the age of 79 following a short illness.

The personality forward, the Hoops’ eighth highest-scoring player of all-time with 189 goals, was a regular on match day at Parkhead once his football career was over.

Hughes marked his debut as a 17-year-old rookie centre-forward with a goal against Third Lanark in a 2-0 win in the League Cup at Parkhead in October 1960. 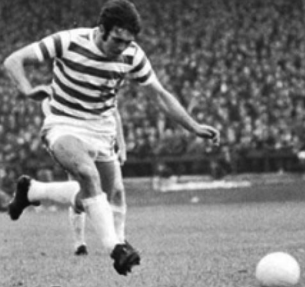 ON THE RUN…John ‘Yogi’ Hughes in full flight.

At the age of 28 and much against his wishes, he was sold to Crystal Palace 11 years later in a double deal with Lisbon Lion Willie Wallace. Unfortunately, his career was over two years later after he had moved to Sunderland. After only a couple games, he was injured early in a match against Millwall.

Postecoglou didn’t get the opportunity to meet the fans’ favourite, but, speaking to Celtic TV, said: “An enormous legacy, an icon and legend of this football club and what a player who loved this club.

“You represent this club and you want to achieve things and be successful, but, ultimately, we just want to be remembered for our time.

“He’s right up there as one who will always be remembered and sadly he will be missed.”