The Hoops hitman was called up for the international squad last week after an absence of two years for the crucial Euro Play-Off Final against Serbia in Belgrade on Thursday night.

Scepovic, who flopped at Parkhead after being signed by Ronny Delia six years ago for a fee of £2.4million, has kept tabs on the team and has told his countrymen to beware the Scots in a winner-take-all confrontation.

The towering frontman, who now plays in Japan with Machida Zelvia, told Glasgow Live: “I had Leigh Griffiths, Callum McGregor and Stuart Armstrong as team-mates at Celtic and they are all in the current Scotland squad.

“Griffiths is always looking for the ball. He can find space and is extremely gifted with a ferocious shot.

“He’s not that tall, but he has a spring when he jumps and his reflexes are exceptional. He’s Scotland’s most dangerous player. 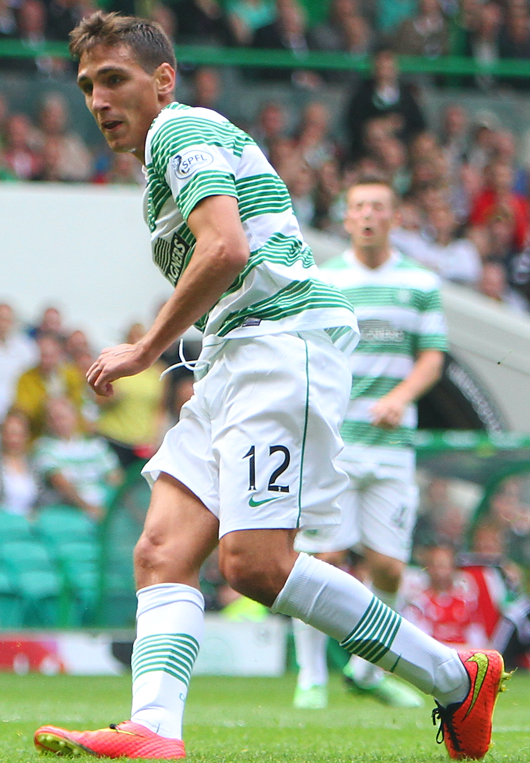 “Callum McGregor was only a kid when I was there, but I still remember him as being very comfortable on the ball and is good at reading a game.

“Stuart Armstrong arrived from Dundee United when I was there. He’s a hard worker. He gets up and down the pitch. He is technically very good. It’s no surprise to me to see him doing so well in the English Premier League with Southampton.

“Scotland will be a real test for Serbia.”

International boss Steve Clarke has hinted he may look to utilise Griffiths from the bench. The 30-year-old striker sat out the 4-1 win over Motherwell on Sunday, but caught up early with the Scots squad as they prepared for the make-or-break encounter.

The Scots gaffer told Sky Sports News: “Leigh being Leigh, we all know his qualities in and around the 18-yard box.

“His recent finishes off the bench for Celtic have been top and, hopefully, he can bring something like that into the camp.

“But he hasn’t started many games for Celtic recently and it might be a big ask for him to start in a game of this magnitude.”