Celtic Quick News on News Now
You are at:Home»Latest News»SIX CELTS WHO WILL MISS OUT ON HISTORY BID
By CQN Magazine on 10th November 2020 Latest News

IN just forty days’ time, Celtic will play one of the most important games in the club’s 132-year history.

Neil Lennon will take his players to Hampden on December 20 for the delayed Scottish Cup Final against Hearts and a victory will bring the phenomenal TWELFTH successive domestic honour to complete an unprecedented quadruple treble.

Coincidentally, it is a rerun of the competition’s silverware showdown on May 25 2019 when the Hoops completed the treble treble when they fought back from a Ryan Edwards goal adrift to turn the occasion around with a double strike from Odsonne Edouard – one from the penalty spot and the other a supreme finish with the clock ticking down.

It was another extraordinary triumph for the Parkhead men that is captured in the Celtic: Treble Treble publication.

Amazingly, FOUR players who were involved that memorable day at the national stadium are no longer at the club – defenders Mikael Lustig, Jozo Simunovic and Jonny Hayes and attacker Scott Sinclair have all moved on during the 19-month time frame. 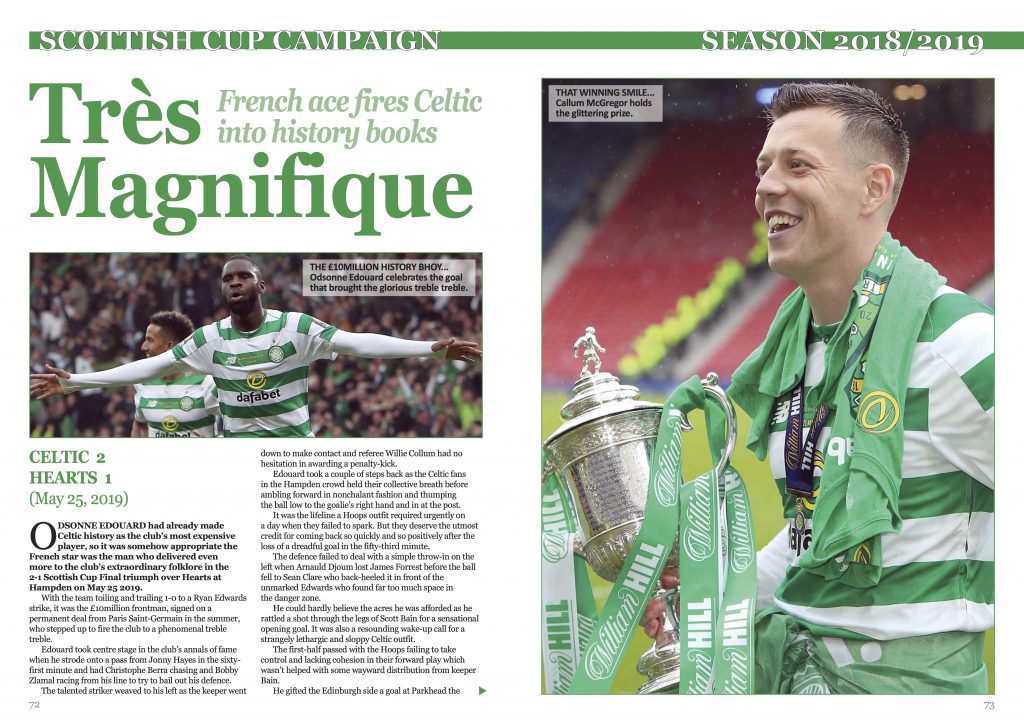 Two others, James Forrest and Mikey Johnston, have no chance of contributing this time around, either, as they are sidelined with long-term injuries.

Lustig, Simunovic and Hayes quit at the end of their contracts in the summer while Sinclair returned across the border during the January transfer window.

It’s been another incredible transformation as Celtic strive to stay on top and continue their domination of Scottish football.

There is also the opportunity for new Bhoys to pick up their first Scottish Cup medal. Lennon’s men overcame Aberdeen 2-0 in the semi-final at the start of this month where Jeremie Frimpong, Shane Duffy, Hatem Abd Elhamed, Mohamed Elyounsoussi, scorer of the second goal against the Dons, and Albian Ajeti all figured.

Celtic – and players old and new – are looking forward to another glorious chapter in the club’s folklore five days before Christmas.