Celtic Quick News on News Now
You are at:Home»Latest News»BRING IT ON: ACTION MAN READY TO GO AGAIN
By CQN Magazine on 30th June 2022 Latest News

JAMES FORREST is one of the most decorated Celtic players in history with 21 honours.

The 30-year-old winger kicked off his 13th pre-season with the Hoops when he went through the rigours of opening-day training with his team-mates on Monday.

Forrest may have seen it, done it and got the medals to prove it, but he still retains that extraordinary enthusiasm for the game he displayed when Neil Lennon introduced him to the first team against Motherwell at Parkhead on May 1 2010 – and he duly delivered a goal in the 4-0 victory. 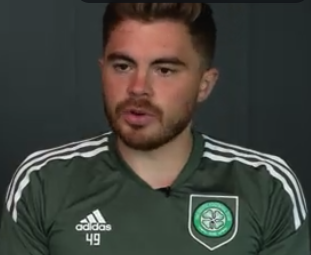 He has seen a whirlwind of changes at Parkhead, none more so than last summer when Ange Postecoglou was named at the Irishman’s successor and TWELVE recruits arrived as the conveyor belt at the club went into overdrive.

While the likes of Furuhashi Kyogo, Liel Abada, Carl Starfelt and Josip Juranovic came through the entrance, first-team fixtures such as Scott Brown, Odsonnne Edouard, Kristoffer Ajer and Ryan Christie headed for the exit.

Postecoglou guided the Celtic ship through stormy waters to reach their destination with a Premiership tile and a Premier Sports League Cup to show for their mighty efforts after the colossal disappointment of the previous term.

Now Forrest is ready to go again and take on the challenges that lie in wait plus, of course, there is the immediate pathway to the Champions League group stages.

The 38 times-capped Scotland international said: “This summer has been different because, usually, I’ve only had a week or 10 days off, so having four or five weeks off was good, but it makes you come back really looking forward to getting going again.

“Last season we were still signing players into the last week of the window, I think it was the biggest turnaround in a squad that I’ve seen since I’ve been here. 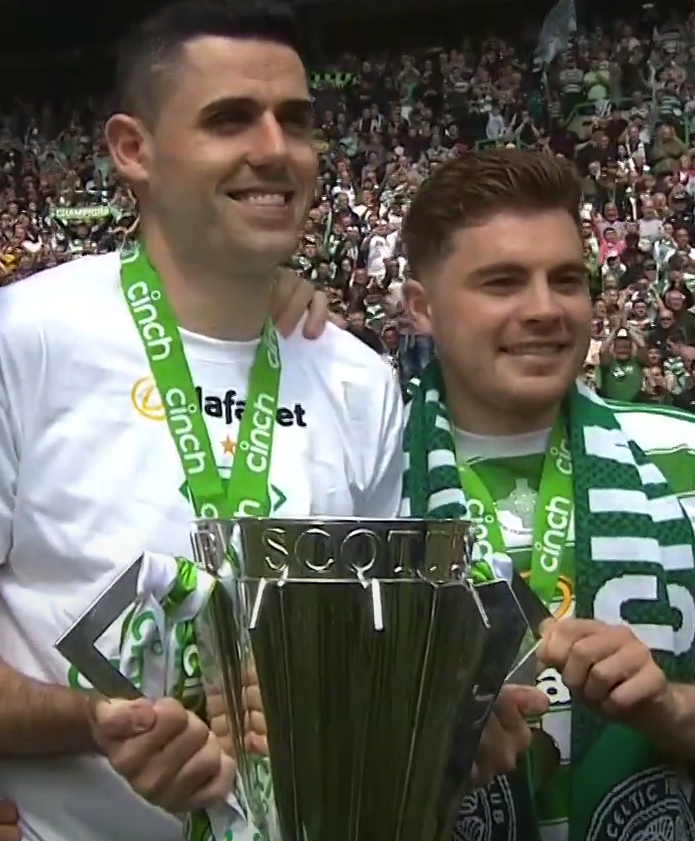 CHEERS AND CHEERIO…James Forrest celebrates Celtic’s title triumph and says farewell to the departing Tom Rogic who played his last game for the Hoops in the 6-0 win over Motherwell last month.

“This squad did settle in last year and I think that can only benefit us this season.

“We now have a base and a core group and over the years I think you get the most success when you have the majority of the squad there and knowing each other.

“It’s still quite early to think of the Champions League, but when the qualifiers come around it will then sink in that we are going straight through and then we will get excited.

“There’s a lot of exciting games and moments that people will look forward to this season.”

Forrest, who agreed a three-year extension at the tail-end of last season, was hampered by injuries in Postecoglou’s debut campaign, but still managed to fire in the League Cup semi-final winner against holders St Johnstone after being introduced as a second-half substutute while the Hoops toiled for the breakthrough. 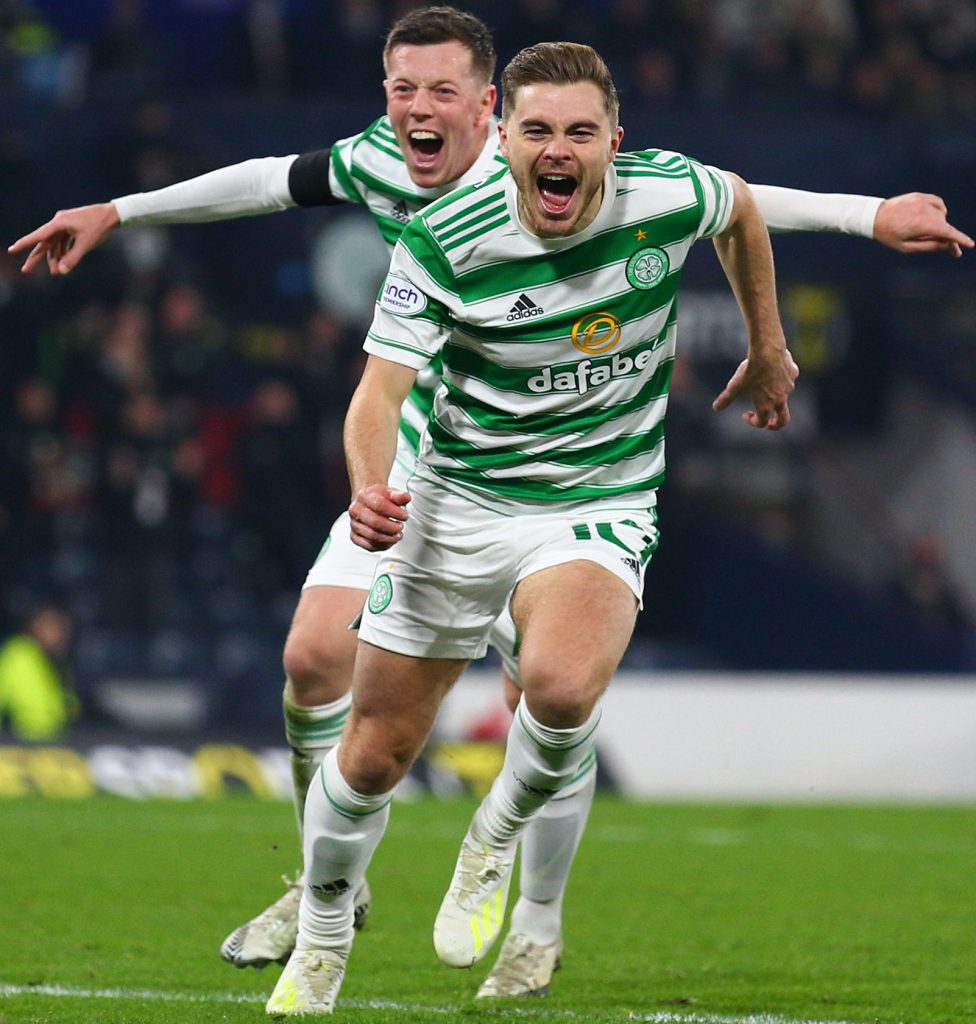 HOOPY DAYS…James Forrest races away in triumph after scoring the League Cup semi-final winner against St Johnstone in November. Captain Callum McGregor is in hot pursuit.

Unfortunately, injury kept him out of the team that lifted the trophy in December when Kyogo fired in a double salvo after Hibs had gone ahead shortly after the interval.

Looking ahead to the 10-day training camp in Austria, Forrest, speaking to Celtic TV, added: “There’s been a few young boys up training with us this week which is good. It gets them in with first-team players and kicks everyone on and keeps us working hard.

“It’s good getting a change of scenery as you’ll be at Lennoxtown all year.

“When you’re away you’re spending the whole time with players in the squad, so it’s beneficial in every department.

“Once you get a couple of weeks of training under your belt, you start to get your fitness from games, so everyone will be looking to play as many minutes as they can to get ready for the season.”