THE Filipe Jota transfer saga will come to an end tomorrow when the Portuguese winger signs a permanent contract at Celtic.

The 23-year-old Benfica winger, who was outstanding during his season-long loan, will put pen to paper to bring to a halt the prolonged finalising of the deal.

The Hoops have agreed a £6.5million transfer fee with the Lisbon club who are looking for something in the region on a whopping 30 per cent in any sell-on fee for a player who rarely featured in their first team. 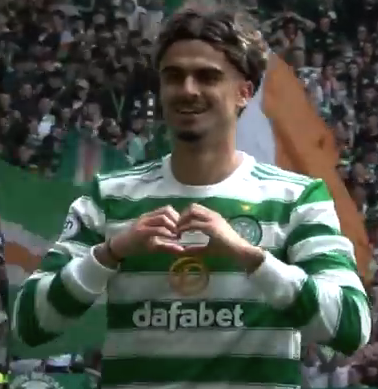 HEARTFELT…Filipe Jota sends a message to the Celtic fans after the 6-0 win over Motherwell at Parkhead on the final day of the season on May 14.

Jota was also out on a temporary transfer with Spanish outfit Real Vallodolid in the term before Ange Postecoglou brought him to Parkhead last summer.

The entertaining wide Bhoy, who scored 12 goals, will now follow the lead of fellow-loanee Cameron Carter-Vickers, 24, who sealed a £6million four-year switch from Spurs earlier this month.

The US international impressed from day one – and scored a debut goal in the 3-0 home win over Ross County on September 11 – and became part of the preferred central defensive pairing along with Carl Starfelt, one of the manager’s first signings at £4.2million from Russia giants Rubin Kazan in July.

Celtic fans will be delighted Jota’s move will be rubber-stamped tomorrow, as reported in Portuguese media outlet A Bola.

The flamboyant raider is expected to accompany his team-mates when they leave for their 10-day training camp in Austria on Monday.