SCOTT SINCLAIR showed marvellous improvisational skills – and a fair degree of cheek – to lead Celtic to a well-deserved triumph over the Dons at Parkhead this afternoon.

The Englishman, who was introduced as a first-half substitute for the injured Odsonne Edouard, snatched the winner with a wonderful back-heel just after the hour mark.

It was what the champions deserved in a match that was peppered by weird decisions by referee Bobby Madden who turned a blind eye to a stonewall penalty claim.

James Forrest blew the opportunity to give the Hoops the lead inside two minutes following an excellent passage of play as the ball was moved around with pace and precision.

Mikael Lustig took up a superb position on the right and picked out the winger with a cute pass inside. Alas, the Scotland international attacker ruined the chance of celebrating his new four-year contract by scooping an effort waywardly over the top from a great position.

Celtic looked in control, but there was a warning the Dons weren’t just in town to admire the skills of their opponents when Niall McGinn whipped in a dangerous right-wing cross which was cleared by the alert Dedryck Boyata.

A few minutes later, there was a heart-in-the-mouth moment for the home support when Gary Mackay-Steven swept over a left-wing cross that carried to McGinn on the edge of the box, but his first-time drive zipped just wide of Craig Gordon’s left-hand post.

Edouard gave a perfect demonstration of why Brendan Rodgers was swift to pay a record £9million to Paris Saint-Germain for his services in the summer when he came within inches of putting the Hoops ahead with a spectacular attempt. 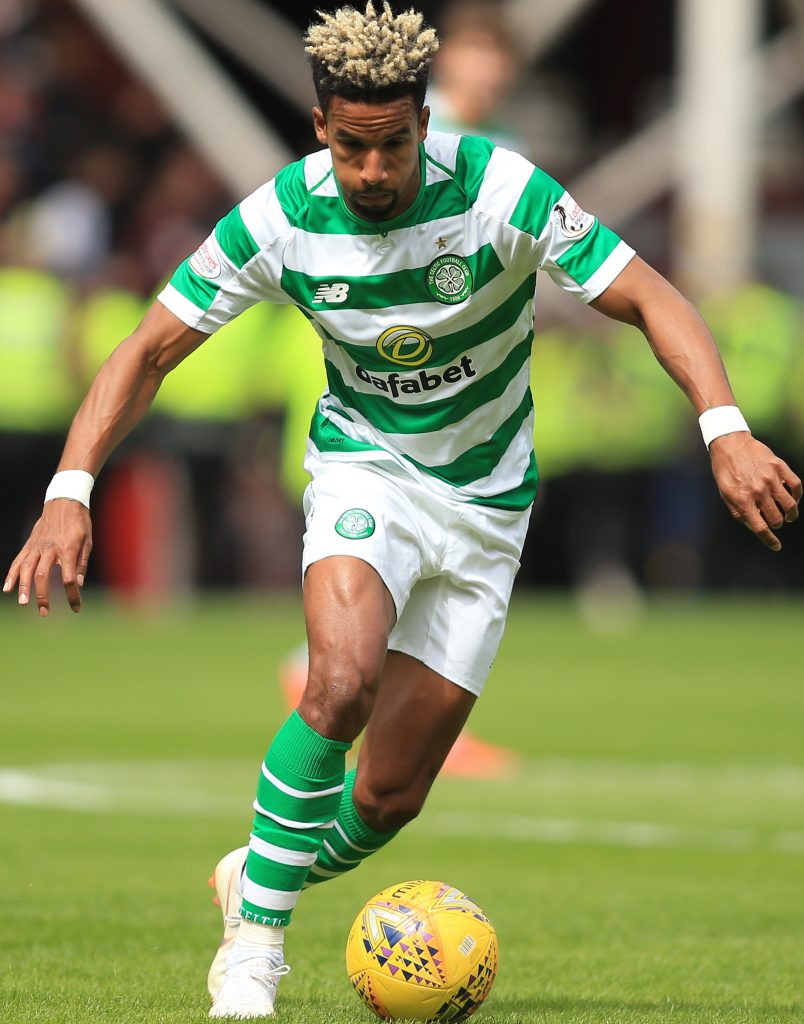 No danger threatened in the 26th minute when he collected a pass 30 yards out, drifted inside from the left and took a swift look up before curling a nonchalant right-foot effort at goal from outside the box.

Dons keeper Joe Lewis stretched his full 6ft 5in, but couldn’t get near the ball as it arced away from his groping fingertips. However, the visitors were fortunate as the effort thudded against the right-hand post and was hastily cleared.

Only moments later, Boyata played a clever quick one-two with Lustig, raced into the box, but the Belgian’s header from the right-wing cross was too high and Lewis’ goal escaped again.

In the 35th minute, referee Madden, no stranger to controversy at Parkhead, made a stunning decision to deny Celtic a penalty-kick.

Scott McKenna, a summer target for Rodgers, made a reckless high assault on Edouard as the French ace raced on to a Leigh Griffiths through ball.

It was a wild and clattering challenge that should have led to an undeniable spot-kick with the probability of a straight red card for the defender following an illegal tackle.

Edouard was sent spinning and Madden amazed friend and foe by completely ignoring the calls for a penalty-kick. It was a ridiculous judgement from the match official and the Dons breathed a sigh of relief yet again.

There was little surprise the classy striker was forced to come off in the 43rd minute with Sinclair coming on in his place. It was to become a moment of supreme irony.

Dramatically, Dons almost scored when Mackay-Steven was allowed to skip past challenges from Lustig, Olivier Ntcham and Boyata before Gordon blocked his finishing effort.

From the right-wing corner-kick, Griffiths booted the ball off the line from a looping header with Gordon rooted to the spot.

Just before the interval, Graeme Shinnie missed the ball in a last-gasp lunge at Griffiths on the edge of the box and, remarkably, the referee once again chose to ignore the claims of a foul.

Three minutes after the interval, McGregor tested Lewis with a long-range drive along the ground and the Dons No.1 reacted with a sprawling save to tip away for a corner-kick. 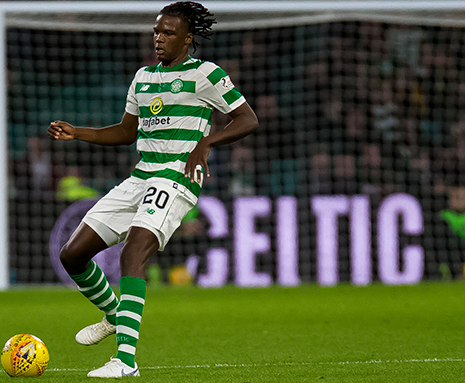 WE’RE RIGHT BEHIND YOU…Dedryck Boyata, with a billboard supporting him, was outstanding against the Dons.

In the 54th minute, Gordon denied James Wilson with a smart dive to his right to push away a bending angled shot after the Dons broke swiftly on the right.

On the hour mark, Rodgers replaced Ntcham with Tom Rogic, a player who has bedazzled Dons with his many talents in the past.

The breakthrough arrived in the 63rd minute after a piece of bewildering improvisation from Sinclair that at last unlocked the iron curtain of Derek McInnes’ defensive-minded outfit.

Forrest flighted over a cross from the right that fell for Griffiths who couldn’t get it under control as he was crowded by defenders. The ball broke to Sinclair with his back to goal.

The flamboyant raider took a touch and then displayed a fabulous flash of imagination as he cheekily and swiftly back-heeled an effort low past Lewis at his right-hand post.

No-one could blame Sinclair for taking off to accept the applause of the delighted supporters behind the goal.

In the 74th minute, Rogic was flattened 20 yards out and Griffiths fired the resultant free-kick through the defensive wall, but Lewis was quick to get down his left and hold on well.

The action ended with Griffiths lobbing past the far post when he should have scored.

But no-one was complaining – least of all Sinclair who showed he still has a future with the champions.