Celtic Quick News on News Now
You are at:Home»Match Report»CELTIC 6 LIVINGSTON 0: THE JOY OF SIX AS HOOPS HIT A HIGH
By CQN Magazine on 10th April 2021 Match Report

JOHN KENNEDY will have an unbeaten managerial record to defend when he takes holders Celtic to Ibrox for the Scottish Cup fourth round encounter at Ibrox a week today.

The stand-in boss, who took over in February after the departure of Neil Lennon, watched the rampant Hoops wallop Livi with a double from Mohamed Elyounoussi, singles from James Forrest, David Turnbull and Ryan Christie while the unfortunate Jack Fitzwater deflected one into his own net.

That win – the team’s biggest league success this season – means the 37-year-old former club and country centre-back has been in charge for five games and guided the team to three wins – Aberdeen (1-0), Falkirk (3-0) and Livi – and two draws, a scoreless stalemate against Dundee United and a 1-1 deadlock with Steven Gerrard’s side.

Now he will be heading across the city in a confident mood after a storming, well-earned victory that also gave the interim gaffer the chance to play five of his substitutes to keep the squad ticking over.

There was a scare, though, when Forrest was forced to come off in the 58th minute and it has to be hoped it is not a recurrence on the ankle injury that kept him on the sidelines for six months. At the start, it was clear he was eager to make up for lost time and he appeared to have been given a roaming commission as he came inside to threaten the visiting back lot. 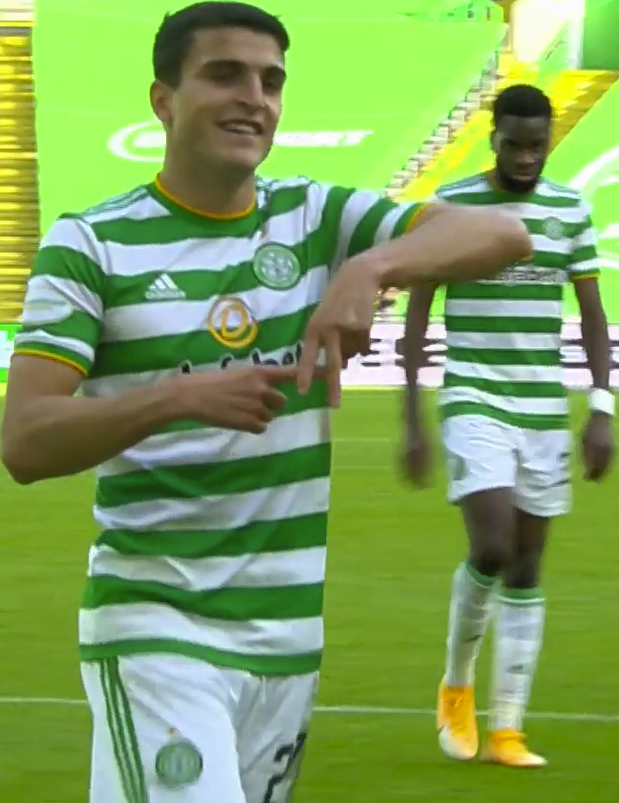 On the half-hour mark, the comeback Bhoy, starting only his second game since his surgery, opened the scoring following some clever leading-up play between Turnbull and Odsonne Edouard.

The French ace clipped the ball into the tracks of Forrest, coming in from the right, to hit a low left-foot drive beyond the helpless Robby McRorie at his left-hand post.

The Scotland international winger’s finish was just what was required to make the breakthrough against stuffy opponents.

Eight minutes later, the Hoops doubled their advantage when Turnbull turned in a deflected left-wing cross from Elyounoussi who had been set free with a defence-shredding ball from Greg Taylor.

The former Motherwell midfielder, a £2.25million arrival in the summer, had been menacing and looking to add to his goals and he could not miss on this occasion from virtually under the crossbar after the keeper had been left stranded at his near post.

AT THE DOUBLE…David Turnbull steers in the second goal after good work from Mohamed Elyounoussi.

Five minutes after the break, Scott Brown threw himself at a right-wing corner-kick that flicked off Jack Fitzwater for the third goal. Elyounoussi was instrumental in the build-up with a superb drive that was excellently pushed away by the athletic McCrorie.

The fourth goal duly arrived in the 54th minute and it was one which was clearly deserved by Elyounoussi. The on-loan Southampton forward simply hammered in a right-foot belter that zipped into the net at the keeper’s left.

McCrorie then made two outstanding saves to thwart goalbound efforts from Edouard and Brown as the Hoops stepped up the pressure.

There was a blow just before the hour mark, however, when Forrest went down and looked in some distress. Kennedy swiftly replaced the 30-year-old ace with Christie coming on with the opportunity to put down a marker before the Cup-tie. 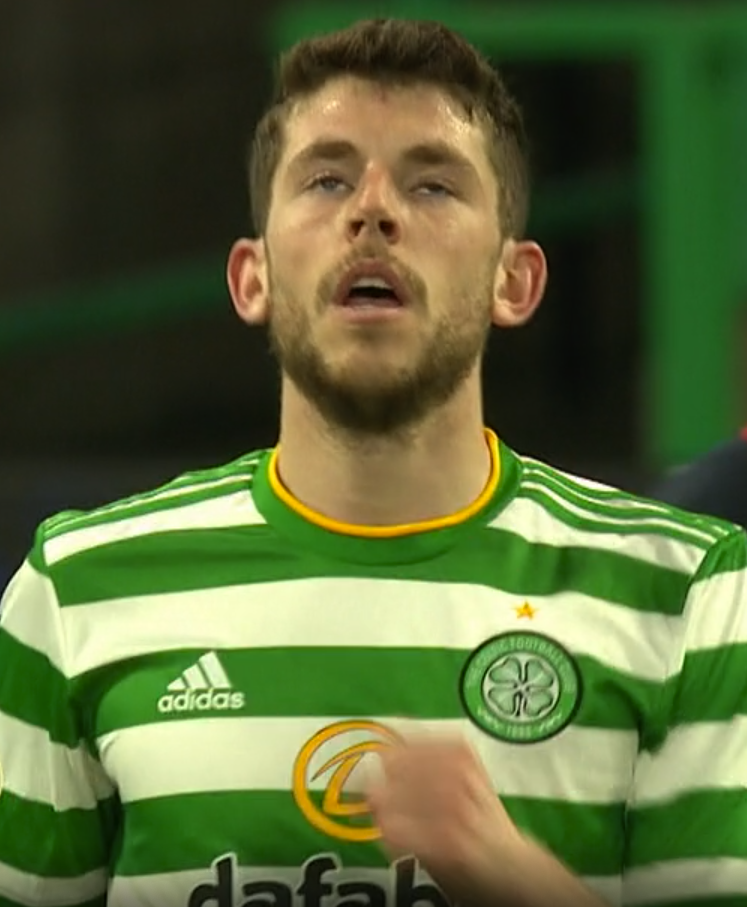 SIX-HIT WONDER…Ryan Christie brings the curtain down on the runaway success.

In the 66th minute, there was a Norwegian one-two that led to No.5 for the unstoppable Celts. Kristoffer Ajer rampaged through from deep and found his fellow-countryman Elyounoussi with a good pass and the left-sided attacker deftly lifted the ball over the outrushing McCrorie.

Two minutes later, Edouard and Turnbull came off with Albian Ajeti and Tom Rogic coming on with Kennedy keeping an eye on the visit to Govan.

Shortly afterwards, Elyounoussi and Brown were removed with Leigh Griffiths and Ismaila Soro taking their place.

In the 87th minute, Christie pounced on a careless square pass from ex-Celt Efe Ambrose and the playmaker carried it on into the box before lashing a low right-foot drive away from the bemused McCrorie.