The crucial kick-off to the section that also contains Bayer Leverkusen and last season’s Champions League conquerors Ferencvaros will take place in Seville.

And Lambert, the Hoops captain who led the team to the UEFA Cup Final in the same city in 2003, admitted that the memory of the extra-time loss to Jose Mourinho’s Porto still hurts.

Over 80,000 Celtic fans were in the Stadio Olimpico in sun-kissed Andalusia when Martin O’Neill’s gallant 10 men – Bobo Balde having been sent off in the extra period – lost 3-2, despite two memorable headed goals from the legendary Henrik Larsson. 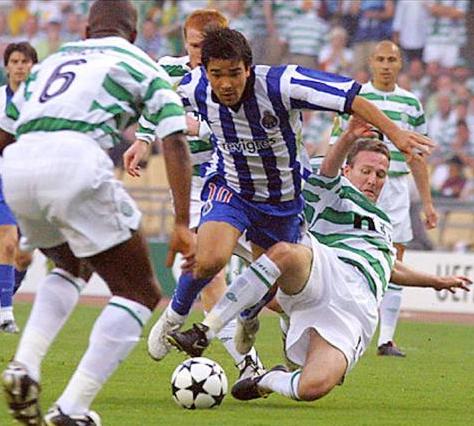 SLIDE IN TIME…Paul Lambert tackles Porto dangerman Derlei as Bobo Balde prepares to move in during Celtic’s heroics in the UEFA Cup Final in Seville in 2003.

Asked if his old club going back to Seville bring back memories, Lambert answered: “Yeah, bad ones!

“That’s the biggest regret the players from our era had – that we never won it there.

“We were so close to doing it. I still say that stadium wasn’t big enough to hold the crowd that we took.

“I don’t think the pitch was good enough for a European final, either. We ran them so close, a really good Porto team who went on to win the Champions League a year later.

“I think it all hinged on a bit of luck, really. But probably if you ask any of us from that squad, that game and not winning it will be the biggest regret for us.”

Lambert, a man of many clubs as manager including Norwich City, Aston Villa, Wolves and Stoke City, won eight honours in his eight years at Parkhead after Wim Jansen brought him into his title-winning squad in his only season in 1997/98. The ex-Scotland captain joined the season after playing in Borussia Dortmund’s side that beat Juventus 3-1 to lift the Champions League.

POSTECOGLOU IN PARADISE…boss Ange applauds the Celtic fans at Parkhead.

Looking at Ange Postecoglou’s early impact on Celtic, the one-time cultured midfielder observed: “I think he’s been a breath of fresh air with the way he’s gone about things.

“Before last season this club had nine years of winning pretty much everything.

“There’s been that transitional period when last year things didn’t go their way. But they’ll come back again and if they start winning trophies he’ll love it here.

”But it’s still so early in the season. One of their best players (Kyogo Furuhashi) isn’t fit, some guys are making their debuts and you could see them taking cramp against Ross County which is normal.

“I thought Cameron Carter-Vickers was excellent and he’ll get better with time, as well. Joe Hart has made a big difference, too, with the sorts of saves he’s made.

“But it’s now just about time for the manager and the squad.

“The club has been through a lot of transition, but there’s a lot of good stuff out there for Celtic right now. 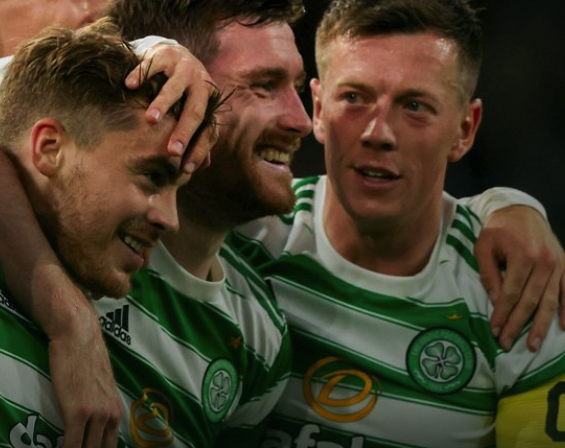 “Callum McGregor keeps on getting better every time I see him play. I thought he looked a bit tired against Ross County after being away with Scotland, but that kind of thing is normal anyway.

“David Turnbull was maybe a bit quiet, but when I have seen him he looks a goal threat without a doubt. They’ve got James McCarthy to come off the bench, as well.

“I think that area of the pitch is the strongest part of the team. Going forward they’re looking exciting at times, too.

“Kyogo, when he comes back, I think he’ll make a hell of a difference again, just as he was showing before he got his injury.”

Viewing the Real Betis challenge, Lambert, speaking to the Daily Record, added: “On these kind of nights it’s when the big players step up and step forward.

“I am pretty sure that’s what will happen on Thursday night in Seville.

“It’s about those bigger players having the ability to keep a cool head on things when you go into games like this one.