CELTIC’S in-form midfielder Ryan Christie has won the Premiership Player of the Month award for November.

The 23-year-old Scotland international has not looked back since coming into the Hoops first team as a second-half substitute in the Betfred League Cup semi-final against Hearts at Murrayfield on October 28.

Christie made his appearance for the injured Olivier Ntcham with the scoreline stalemated at 0-0. He was involved in three goals – including chipping with a sublime killer third – as Brendan Rodgers’ men raced to a 3-0 success. 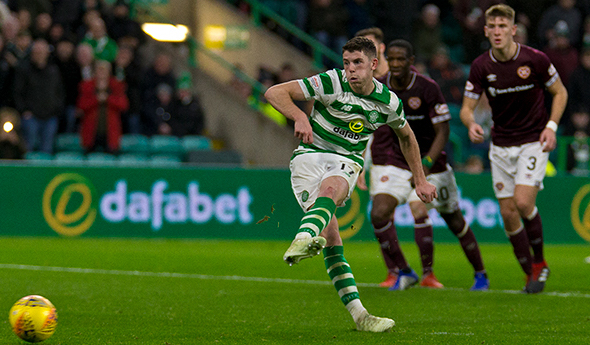 ONE…Ryan Christie slots in a penalty-kick in the 5-0 win over Hearts.

THREE…Christie is on target in the 1-1 draw with Motherwell at Fir Park last night.

He repeated the feat via the penalty spot against the Tynecastle outfit when the champions rattled in five goals without reply at the start of last month.

Overall, he has claimed six goals in his last nine appearances and netted the winner against Aberdeen in the Betfred Final on Sunday.

The Highlander was also on target at Fir Park last night as the champions were held to a 1-1 draw by Motherwell.

The Parkhead men rewarded Christie, who cost a bargain £500,000 when he signed from Inverness Caley Thistle in August 2015,  for his recent performances with a three-year extension last month.

Christie, who also spent 18 months on loan at Pittodrie before returning in the summer, admitted: “It’s nice to get these awards after putting in the work, but it’s a team effort and we’ve been fantastic.

“Getting a run of games has been crucial to my development. I certainly feel at home here.

“Obviously, it can be can difficult with such a big squad full of quality players, but I just kept my head down and worked hard to get my chance.

“The manager wants goals from midfield in his team. I’m enjoying my form at the moment and happy to contribute in any way I can.”