Celtic Quick News on News Now
You are at:Home»Latest News»EDOUARD: ‘THERE’S NO LIMIT FOR HIM,’ JULLIEN
By CQN Magazine on 23rd August 2019 Latest News

CHRISTOPHER JULLIEN reckons the rise in quality of fellow-Frenchman Odsonne Edouard is “unbelievable” and “incredible”.

The £7million centre-half watched the £10million striker score a sublime free-kick as Celtic beat AIK Stockholm 2-0 in the first leg of their Europa League play-off at Parkhead last night.

Both did their jobs expertly as the Hoops kept a crucial clean sheet and Edouard gave the team some breathing space ahead of Thursday’s return in Sweden when he doubled the advantage following James Forrest’s well-taken opener.

Jullien played alongside the 21-year-old hitman when he was on loan at Toulouse from Paris Saint-Germain and has been amazed with his progress.

The most expensive defender in Celtic history, speaking to the Evening Times, said: “I’ve known Odsonne a long time from back in France and he’s just unbelievable.

“From where he was when I was with him in his first year as a pro to where he is now is incredible. I say to him every day he is on his way to the very top. He’s such a good player. 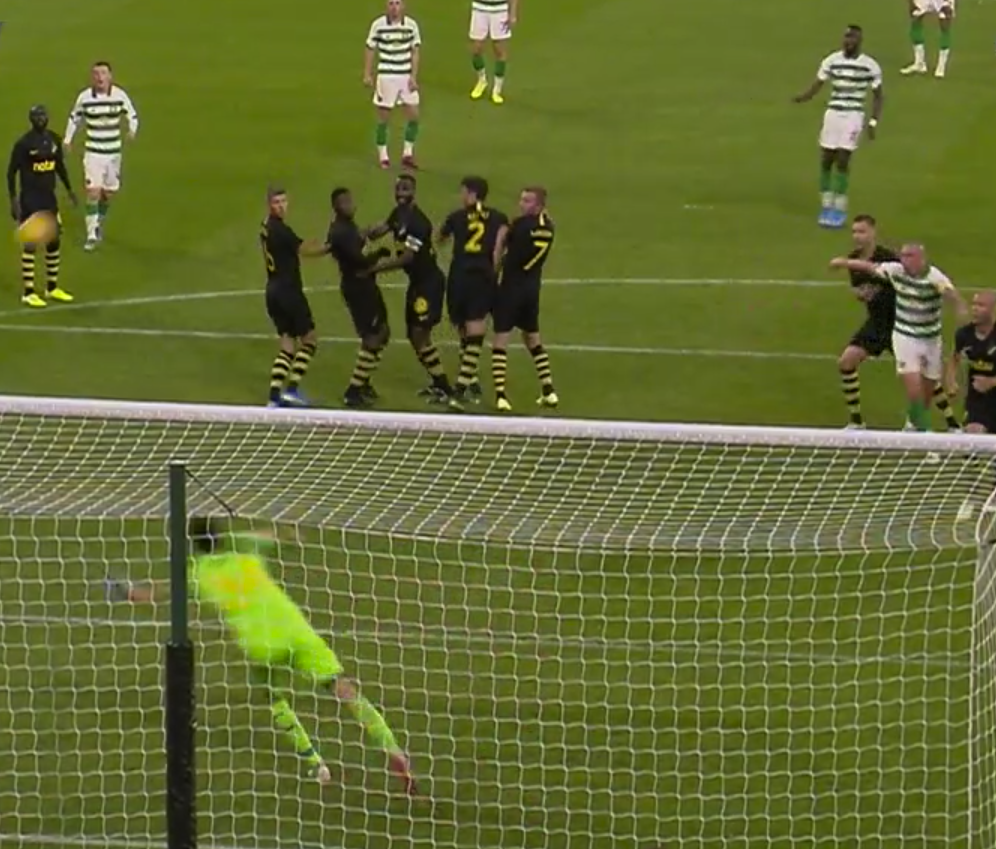 ODDS-ON GOAL…French ace Odsonne Edouard fires in his free-kick for Celtic’s second strike against the Swedes.

“I was really happy for him tonight because he worked so hard and he is a wizard with the dead ball. There’s no limit for him. He’s a striker who has everything you need on the field. He can score, hold the ball, head the ball, dribble.

“Everything. It’s really good for Celtic and for him. I hope he continues to work because he’s on the way to the top.”

Jullien continued: “Since I arrived here I can see there is a lot of talent. Being fit was my first preoccupation. We have a lot of good players here, so I just had to work hard and keep going. All the players and staff have been good with me since I came, so I’m really happy.

“I know that Celtic is a big team and big club with big expectation, but I knew what I was coming to when I signed. That’s a good thing and good for my career. It’s a good challenge for me.”

Asked about being left out of the Champions League loss against Cluj, Jullien answered: “Last week, it was just one game I wasn’t in the team. I just had to work more. The players on the field did their best and they played well. We had the chance to win.

“We didn’t take that final step, but we have to look forward because it’s in the past now. We won at the weekend and this was a good result. It’s not about me, it’s about the team.

“I’m really happy here and I’m glad we have positive vibes after the game.”

The Hoops can travel to Stockholm with a fair degree of confidence after last night’s dominant display, but before they pack their bags they have the matter of a visit from Hearts on Sunday and another three points to be won in the search for nine in a row.