Celtic Quick News on News Now
You are at:Home»Latest News»‘I’M BUZZING TO BE BACK,’ FORSTER
By CQN Magazine on 23rd August 2019 Latest News

The former Hoops keeper, who left for Southampton in a £10million switch in 2014, watched Neil Lennon’s men beat AIK Stockholm 2-0 in the Europa League first leg play-off from the Parkhead stand.

Forster, 31, was paraded in front of the support at half-time and proudly displayed the number 67 shirt which he had requested.

The skyscraper shotstopper, speaking to the club website, said: “I’m absolutely delighted to be here, it feels like I’m coming home and I’m buzzing to be back at this great club.

“Now, I just want to get back training and get back playing.

“I loved my time here before and I felt like it was the right number for me, I want to do my absolute best for this club. 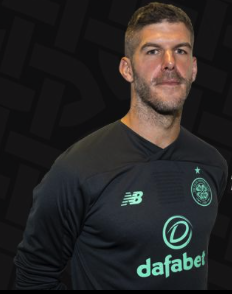 “The gaffer has always been brilliant with me, and when the opportunity came up to come back and work with him again, it was one that was too good to turn down.

“I’m delighted to be back – Woodsy is still here, and I know a lot of the lads, which is makes it feel like I’ve come back home. With that in mind, I hope I can fit straight back in.”

Forster dropped out of favour at the south coast club following a change of manager and played in only one Premier League game last season.

He was bought by Lennon for £2million from Newcastle following two years on loan..

Ironically, that fabulous run came to an end when Jonny Hayes walloped in a scorching drive for Aberdeen at Pittodrie.