Celtic Quick News on News Now
You are at:Home»Latest News»FUMING FRIMPONG FIRES BACK AT REF
By CQN Magazine on 20th January 2020 Latest News

FUMING Jeremie Frimpong insists he was the victim of a double penalty-kick blunder by ropy ref Alan Muir.

The Dutch teenager was left bemused by the match official as Celtic beat Partick Thistle 2-1 in the Scottish Cup-tie at Firhill on Saturday to set up a last-16 clash at Clyde next month.

Muir flashed yellow at the right-back which, at least, wasn’t quite severe as the dismissal from Willie Collum in the Betfred League Cup Final success over Steven Gerrard’s Ibrox outfit  at Hampden last month.

On that occasion, Fraser Forster saved Alfredo Morelos’ award, but, on this occasion, netted when it was too late to prevent Neil Lennon’s side winning their 32nd consecutive domestic Cup encounter.

In Maryhill, Frimpong was bowled over by Jags defender James Penrice in the first-half as the holders led through a typical strike from Leigh Griffiths.

The Amsterdam-born defender, like a fair percentage of those who witnessed the incident, clearly could not believe Muir’s decision to wave play on.

The referee, though, was quick to point to the spot later on when Frimpong made a perfectly good tackle on Thistle substitute Dario Zanatta who didn’t even appeal for a penalty as he went down in the box.

Frimpong was puzzled at the decisions which went against him and also mystified that no explanation was forthcoming from Muir when he sought clarification at the second offence.

The new fans’ favourite, speaking in the Daily Record, said: “In the first half, I clearly got past him [Penrice]. I clearly was in front of him. He clipped me and the ref didn’t do anything. 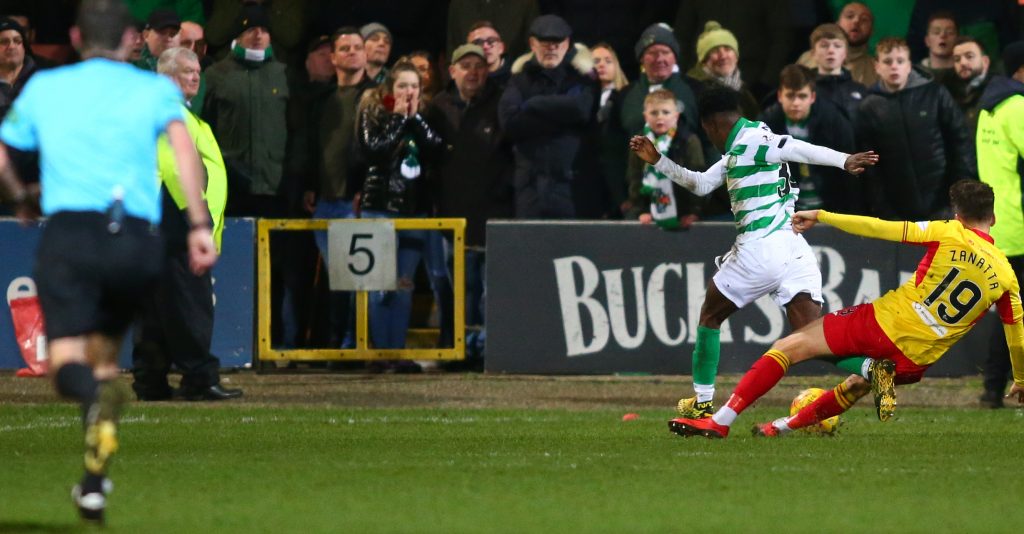 “Last minute, I was in front of him (Zanatta) again and the ref gives it. I dunno. Maybe the ref doesn’t like me.

“He couldn’t say anything, anyway, because it wasn’t a penalty. I don’t need to see it again. It wasn’t, but what can I do?

“Obviously, it made me feel bad because I conceded a penalty again, but even the players at the end were saying it was harsh. I don’t know what the ref was doing. It didn’t ruin a good performance, but it was not nice, really.”

Frimpong was anxious about the possibility of being banished at the penalty-kick award and added: “I thought because it was a goalscoring opportunity, if it was a foul, he could give me a red. I don’t know why he didn’t give me a red.”

Neil Lennon backed his starlet over both incidents immediately after the confrontation.

He said: “I’m not happy with the penalty at all. Really disappointed with that decision. Jeremie has made an unbelievable recovery and got his body across and the lad has put it wide.

“Myself and my staff were all in agreement that it wasn’t a penalty. The referee said he clipped his heels, but he didn’t. He actually got his body across the front of him. He’s stood up, been a good defender and put the guy off. He was feeling a bit aggrieved, but you have to admire his quality and desire to get back there. His will to get back and make a challenge is fantastic.

“The first is a push on the back, a definite penalty, Jeremie is at full pace and he has gone over. He has not dived, so I don’t know how that can’t be a penalty.”