Celtic Quick News on News Now
You are at:Home»Latest News»GRIFF ON A KNIFE-EDGE
By CQN Magazine on 12th May 2021 Latest News

LEIGH GRIFFITHS is on a knife-edge with his Celtic career on the line and only two games to go in a miserable campaign for the individual and the club.

The 30-year-old striker has under-performed in a crucial campaign with a meagre seven goals to his name and the club have made no moves to activate the 12-month option on his contract which expires at the end of the month.

Griffiths, ignored by stand-in boss John Kennedy and left on the substitutes’ bench in the flop at Ibrox, is hoping to get the opportunity to get a start against St Johnstone at Parkhead this evening and former club Hibs at Easter Road on Saturday before the curtain comes down.

The raider, who has not shown anything like his true form in the last three seasons, is now sweating it out to see if he still has a future in the east end of Glasgow.

Asked if there had been any update on the forward’s situation, Kennedy replied: “Nothing as yet. I think this is going to be a conversation, because there hasn’t been any decision made in terms of the management and everything else that goes with it. 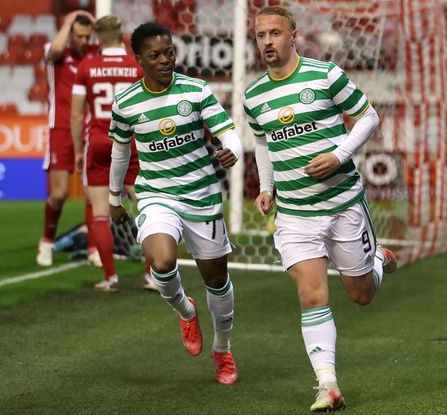 ONE FOR THE ROAD…Leigh Griffiths is about to be congratulated by Karamoko Dembele after his stoppage-time equaliser against Aberdeen at Pittodrie.

“Again this is one that we have to get through this week and then obviously the club will have to have a discussion with Leigh on that. There’s nothing happening at the moment on that, there is not an update on it.”

The caretaker gaffer, speaking to the Evening Times, added: “It’s the same with several issues around the squad. The players have been great with that, the players who are in that situation, they’ve been very professional in their work and they understand the situation has not been ideal.

“However, they’re parking that for the time being and that’s something that’ll have to be addressed in the next couple of weeks, or next week, I’d imagine.”