The former Scotland international also reckons Celtic’s interim manager has spoken more to the striker during his brief time in charge than outgoing gaffer Brendan Rodgers did in the past two months.

Griffiths has not been seen since early December as he strives to overcome personal problems, but Commons thinks his ex-Hoops team-mate could return to first-team action in the coming weeks.

Rodgers, who abruptly quit the Hoops last week to become manager at mid-table Leicester City, backed Griffiths when it emerged he was taking time away from the game.

At the time, he insisted: “What’s most important is Leigh’s welfare. Football is irrelevant if he is struggling in other areas.”

Lennon, who paid £1.2million to sign the 28-year-old striker from Wolves in January 2014 following his two impressive loans spells at Hibs, has returned to lead the team to the end of the season, at least, with an unprecedented treble treble within touching distance.

Griffiths appeared to be pleased about Lennon’s arrival back at the club, posting a picture on Instragram of the two together from the Iirishman’s  first spell in charge. 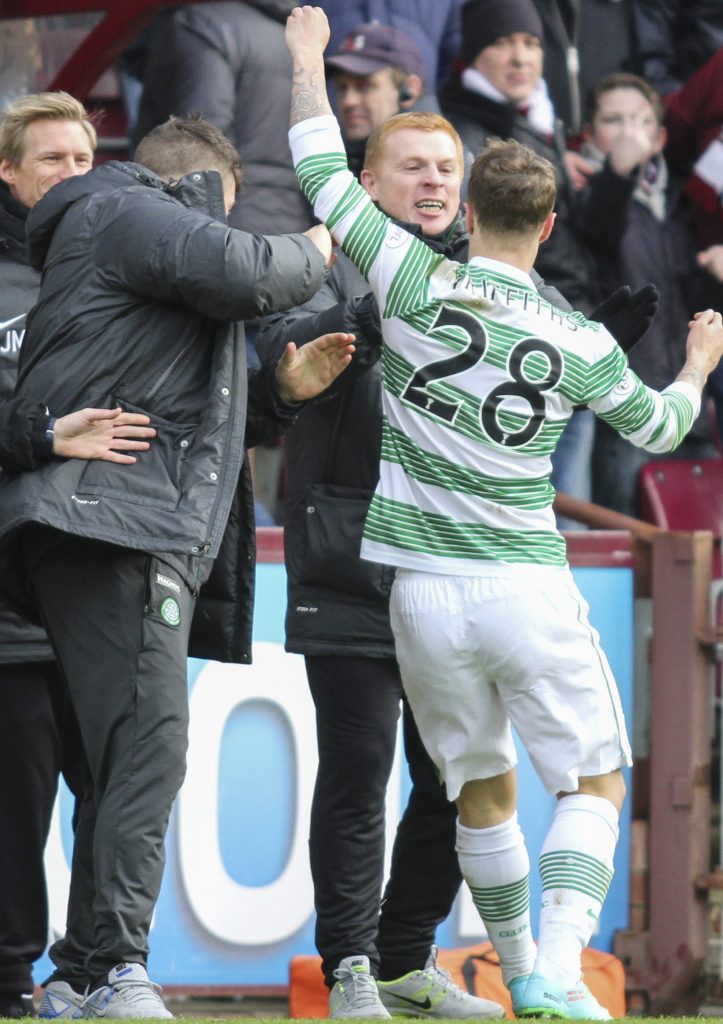 THAT’S MY BHOY…Neil Lennon celebrates with Leigh Griffiths after a goal against Hearts at Tynecastle.

Commons, writing in his Daily Mail column, insisted: “It’s my understanding that Leigh Griffiths is close to making his return following some off-field personal difficulties.

“He feels like he’s in a much better place mentally and is looking forward to getting back on the pitch and contributing.

“Neil Lennon certainly won’t rush him back – and nor should he.

“He’ll put an arm round him and give him all the time he needs.

“From what I’m hearing, Lennon has spoken more to Griffiths over the past week than Brendan Rodgers did during the past two months.”

Griffiths became a ton-up Bhoy when he scored his 100th Celtic goal with a trademark free-kick in the 3-0 win over FK Suduva in the Europa League qualifier at Parkhead on August 30.

His last goal for the team came with another deadball effort in the 3-0 victory over Hamilton Accies at the Hope Stadium on November 24.