ABERDEEN boss Derek McInnes has set his sights of wrecking Celtic’s bid for the treble treble.

The Dons gaffer masterminded a deserved 2-0 replay triumph over Steven Gerrard’s side at Ibrox last night to set up a Scottish Cup semi-final showdown against the Hoops next month.

It appears McInnes and Co have effectively ended the Govan side’s season early with goals from ex-Celt Nial McGinn and teenager Connor McLennan.

With Neil Lennon’s men eight points clear at the top of the Premiership with only nine games to play, they are odds-on to win their eighth successive title.

And the Pittodrie outfit now stand between them and a Cup Final meeting against either Hearts or Inverness Caley Thistle at Hampden on May 25 as they zero in on an unprecedented third domestic silverware clean sweep in a row.

A jubilant McInnes celebrated his club’s third win over Gers in Glasgow in this campaign, a hat-trick of successes achieved without the loss of a solitary goal – 1-0 in the Premiership and the League Cup semi-final and last night’s 2-0 triumph.

The Dons manager, speaking to the Sun, said: “We’ve got closer to Celtic in the big games. 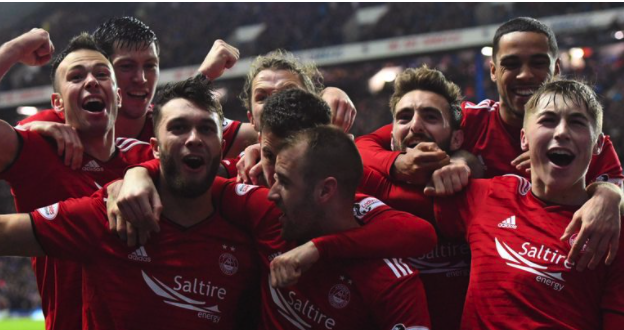 GLORY IN GOVAN…the delighted Dons players celebrate the win that sets up a semi-final clash against Celtic.

“We’re used to Hampden now. We’ve had a couple of real disappointments there, but we’ve had some good performances in semi-finals.

“The fact we’re going back there for the third time this season – I feel my players are used to the surroundings, regardless of the opponent.

“Celtic will be firm favourites, but I’m just glad we’ve got the opportunity to get the club into another Final.”

As CQN reported last night, the Reds will be without skipper Graeme Shinnie after he picked up his second yellow card in the competition for a slide tackle on Ryan Kent.

The last-four confrontation – due to be played on the weekend of April 13/14 – will be the fifth meeting between the clubs this term.

The champions have won three – all by the odd goal – and were held to a scoreless stalemate at Parkhead on Saturday.

Celtic beat the Dons 1-0 in the League Cup Final with a Ryan Christie volley in December and Scott Sinclair claimed the only strike in another narrow triumph on the east end of Glasgow in September.

And Sinclair was the man who mattered when the visitors triumphed 4-3 at Pittodrie on Boxing Day.