CELTIC will take on Aberdeen in the Scottish Cup semi-final at Hampden next month.

The Dons overcame Rangers 2-0 in their quarter-final replay at Ibrox tonight with goals in the third minute from ex-Hoops prospect Nial McGinn and another from teenager Connor McLennan after the turnaround.

Pittodrie skipper Graeme Shinnie will miss the game against the holders after picking up a yellow card against Steven Gerrard’s side following a slide tackle on Ryan Kent.

It will be the FOURTH time in the last six domestic Cup competitions the Hoops have faced Derek McInnes’ side.

Two seasons ago, they beat them 3-0 in the League Cup Final and 2-1 in the Scottish Cup Final, courtesy of Tom Rogic’s dramatic stoppage-time winner.

And Ryan Christie put the Dons to the sword in this term’s League Cup showdown when he netted a superb volley just before the interval. 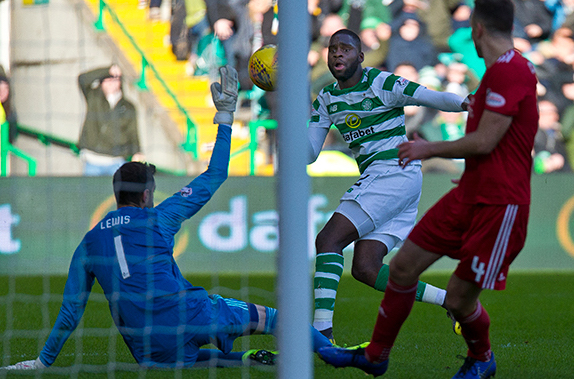 Celtic have already played the Reds four times in this campaign, winning 1-0 in the Premiership in September and drawing 0-0 at the weekend.

Scott Sinclair bagged a hat-trick in the 4-3 win at Pittodrie on Boxing Day.

And, of course, there was the triumph in the League Cup to claim the first silverware of the domestic term.

Now Neil Lennon and McInnes will lock horns again at the national stadium in the middle of next month.

The Pittodrie outfit have beaten Gerrard’s team three times out of three in Glasgow this season – winning 1-0 in Premiership, by the same score in the League Cup semi-final and tonight’s 2-0 result to virtually end the Ibrox side’s season.

Hearts will meet Inverness Caley Thistle in the other last-four clash after overcoming Partick Thistle 2-1 in their quarter-final replay at Tynecastle this evening. The Jags’ on-loan Hoops keeper Connor Hazard saved a penalty-kick, but couldn’t prevent Gary Caldwell’s outfit ftom toppling out of the competition.