Celtic Quick News on News Now
You are at:Home»Match Report»MIKA AND MOUSSA ON THE DOUBLES AND A HAMPDEN HONEST MISTAKE
By CQN Magazine on 21st October 2017 Match Report

LEAGUE Cup specialist Moussa Dembele continued his love affair with the competition as he fired in two second-half goals – and launched Celtic into their THIRTY-SIXTH Final.

Amazingly, the French Under-21 international striker has scored in every game he has played in the tournament.

And he was handed the opportunity to keep the run going when he was introduced as a 61st-minute substitute for the tiring Leigh Griffths.

The Hoops were leading 2-1 at that stage with two goals from the unlikely source of Mikael Lustig, netting for the first time this season.

Ropy referee Kevin ‘Clanger’ Clancy had thrown Hibs a lifeline with a scandalous penalty-kick decision before Dembele eased the pressure only five minutes after making his appearance.

“The standard of refereeing in Scotland has been shocking!”@chris_sutton73 bemoans the officials as Hibs are awarded a penalty. pic.twitter.com/0Gznl0PDPL

There was ping-pong football in the Edinburgh side’s box as Stuart Armstrong picked out James Forrest, who came on for Paddy Roberts, and the ball was fed across to Scotty Sinclair.

He didn’t make solid contact and the ball fell to master marksman Dembele and he slid it past the exposed Ross Laidlaw.
The comeback Bhoy was thwarted later on before he killed the game with the deadly fourth in the 88th minute.

Celtic repelled a right-wing corner-kick and it fell to the lively Forrest who struck an angled pass into the box where Sinclair and Dembele lurked.

The Englishman opted to let the ball run to his colleague and the powerful hitman tucked it away with a fair amount of aplomb.

It was just as well quick-thinking Sinclair made that decision – he was just offside and the move would have broken down the instant he made contact. Dembele’s timing was perfect and he is certainly showing signs of coming good after overcoming his hamstring problems.

Celtic deserve an avalanche of praise for their performance against Neil Lennon’s side who made a real fist of it after going in two goals adrift at the interval.

The Hoops leapt into the Lead in the 15th minute after Paul Hanlon had blocked a shot from Sinclair.

Armstrong crossed from the left, Dedryck Boyata got the merest of touches with his head to flick it on for Lustig and he neatly turned the ball beyond the helpless Laidlaw.

In the 27th minute, Griffiths was presented with a free-kick opportunity in his favourite position at the national stadium, but on this occasion he blasted a wayward effort into the wall.

Craig Gordon had his first save just before the 40th minute when he punched away a fizzing deadball effort from former team-mate Anthony Stokes. 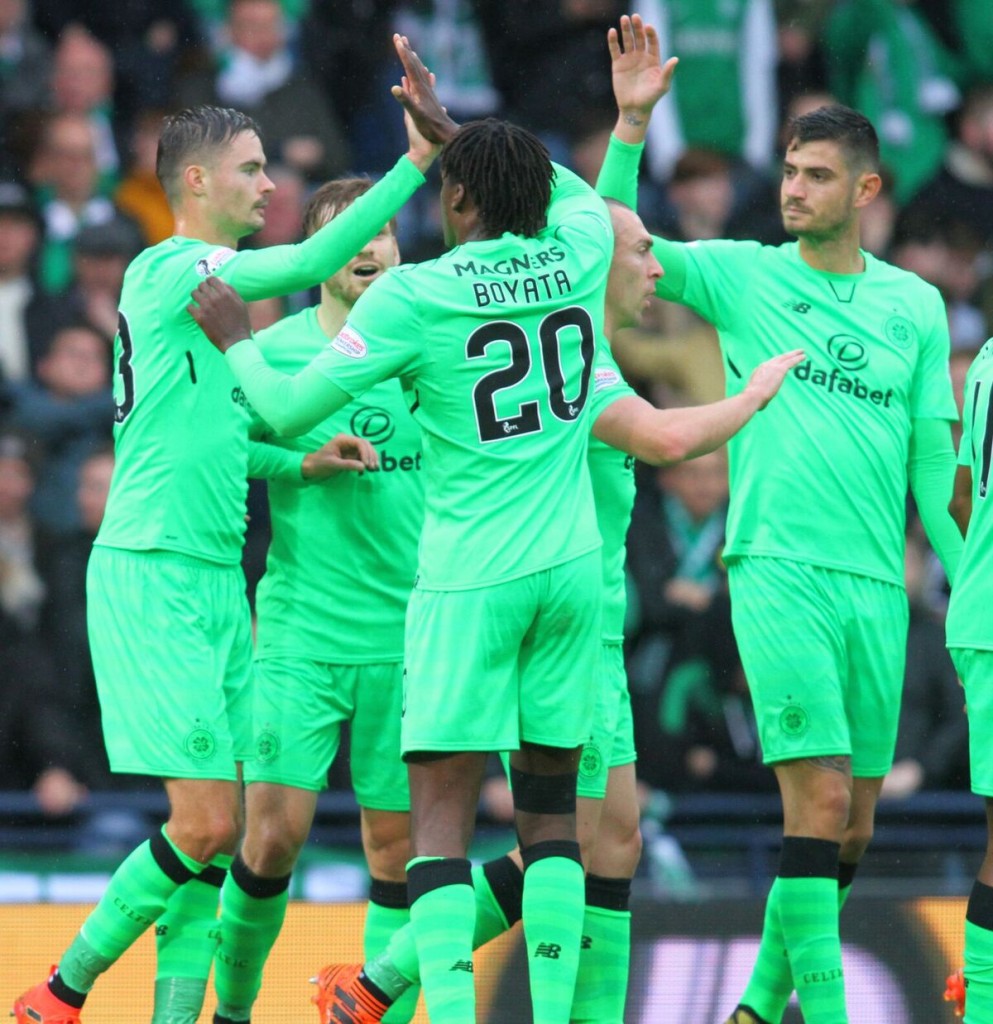 Three minutes from half-time, Lustig doubled the Hoops’ advantage with another fine finish.

A Sinclair cross was blocked for a corner-kick by Efe Ambrose and Griffiths flighted in a left-wing cross.

Once again, the Swedish defender was clever enough to get round the back of the Hibs rearguard and his finishing effort was pushed into the net by Laidlaw.

Lennon sent on Martin Boyle to help Stokes in attack and he also introduced the experience of Steven Whittaker for the second period.

Ten minutes after the break, the changes could have been made merely academic when Sinclair set up Kieran Tierney and his low left-foot drive zipped past the Hibs keeper and clipped the base of the far post.

Remarkably, the Easter Road outift were back in the game four minutes later with the absolute gift of a spot-kick by match official Clancy. Boyata was slack in the original build-up, but atoned by getting in a solid tackle on Boyle as the attacker attempted to race into the box.

The Belgian knocked the ball for a shy and Boyle actually stood on the Celt’s foot as he went down.

Clancy, to the dismay of the Celtic support and the delight of the Hibs fans, pointed wrongly to the spot.

It was a crazy decision, but it didn’t prevent Stokes from burying the award low into Gordon’s net at his left hand side as the keeper took off for the right.

Just after the hour mark, Brendan Rodgers sent on Dembele and Forrest for Griffiths and Roberts and got an instant reward with the third goal from the French ace.

Five minutes later, Hibs were back in the game as substitute Olly Shaw nipped in behind Nir Bitton onto a Whittaker pass and thumped a low drive beyond Gordon.

Tension was evident as Lennon’s men tried to gain the impetus. Celtic’s cause wasn’t helped by three sclaffed clearances in quick succession from their keeper. 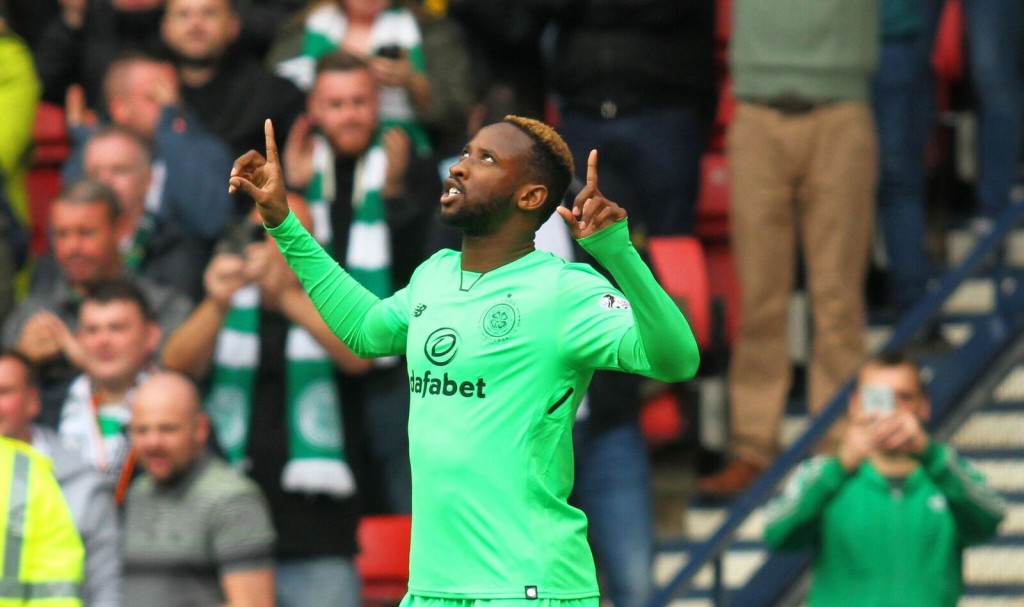 In the 78th minute, the sprawling Laidlaw saved from Forrest and two minutes later the little winger was thwarted again with a soaring left-foot effort that was pushed over the bar.

It was all exciting, dramatic stuff with Hibs doing their best to level and at least take the game to extra-time.

With six minutes to go – and the nerve-ends of the 39,813 fans jangling – Dembele was sent through by an excellent pass from Tom Rogic, on for Armstrong, but the keeper managed to block his low drive and Hanlon booted the rebound for a corner.

But, thankfully, Dembele had the final say with the fourth and final goal with only two minutes remaining.

Some of Celtic’s possession play was a joy to behold, simply masterful with Scott Brown, Callum McGregor and Armstrong looking composed and unruffled.

Bitton, drafted into central defence with Lustig returning to right-back in place of the benched Cristian Gamboa, sauntered around the rain-soaked surface with ease as he pinged passes all over the field.

The Israeli didn’t need any invitations to go forward as Hibs stepped off him in the first-half, but the introduction of the pacy Boyle after the interval upped the ante.

Celtic can be rightly proud of their 60th unbeaten game against Scottish opposition.

They displayed true grit when it was required and boss Rodgers made the right decisions at the crucial stages in the game.

Now all eyes are on Aberdeen at Pittodrie on Wednesday with the pressure relentless on the Hoops.

So far there have been no signs of cracks, but there are certainly signs of tired legs.  The three subs today should hopefully get the nod to start and someone should tell Leigh Griffiths to stay off social media after a match that he’s not played at his best. 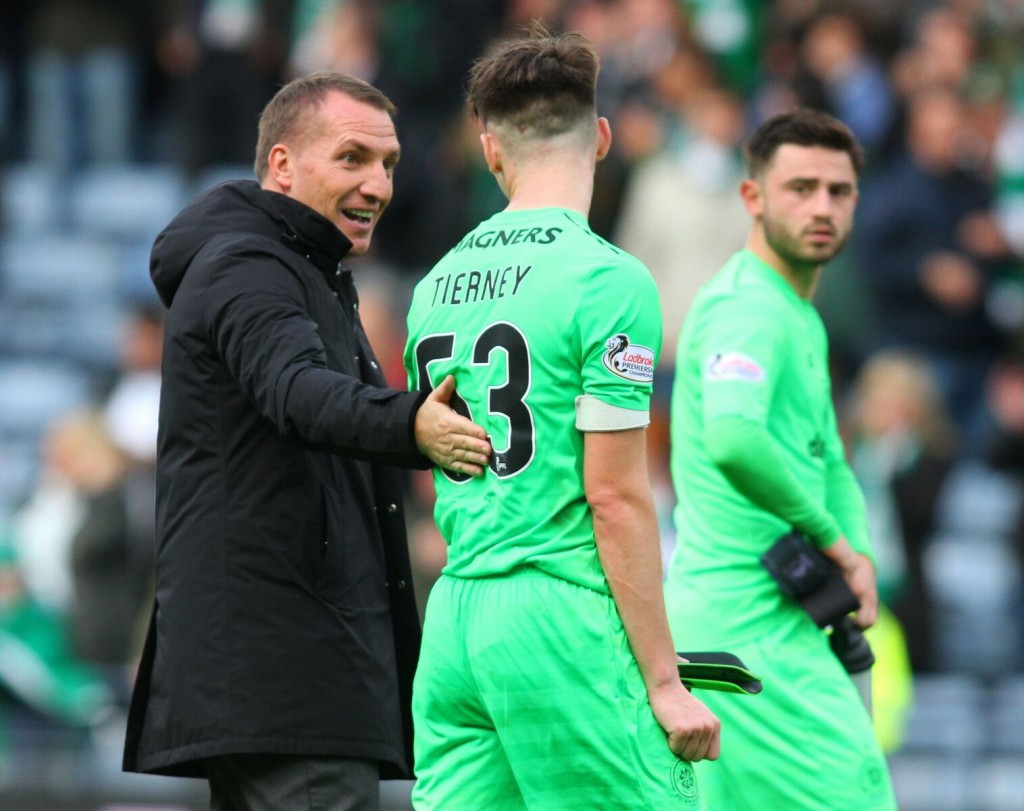