REJUVENATED Anthony Ralston DOUBLED his previous Celtic goal tally when he headed in the opener in the 3-1 win over Hibs at Easter Road last night.

Until this season, the Hoops youngster had claimed two first-team goals – against Motherwell and Dundee – since being introduced to the side by Brendan Rodgers in 2016.

The 22-year-old right-back, who made only one appearance in the top side last season – the scoreless stalemate with Livingston at Parkhead in January – got the nod off the Greek-Australian for his 20th outing in Leith at a ground where the Glasgow side had not won a league game since January 2014. 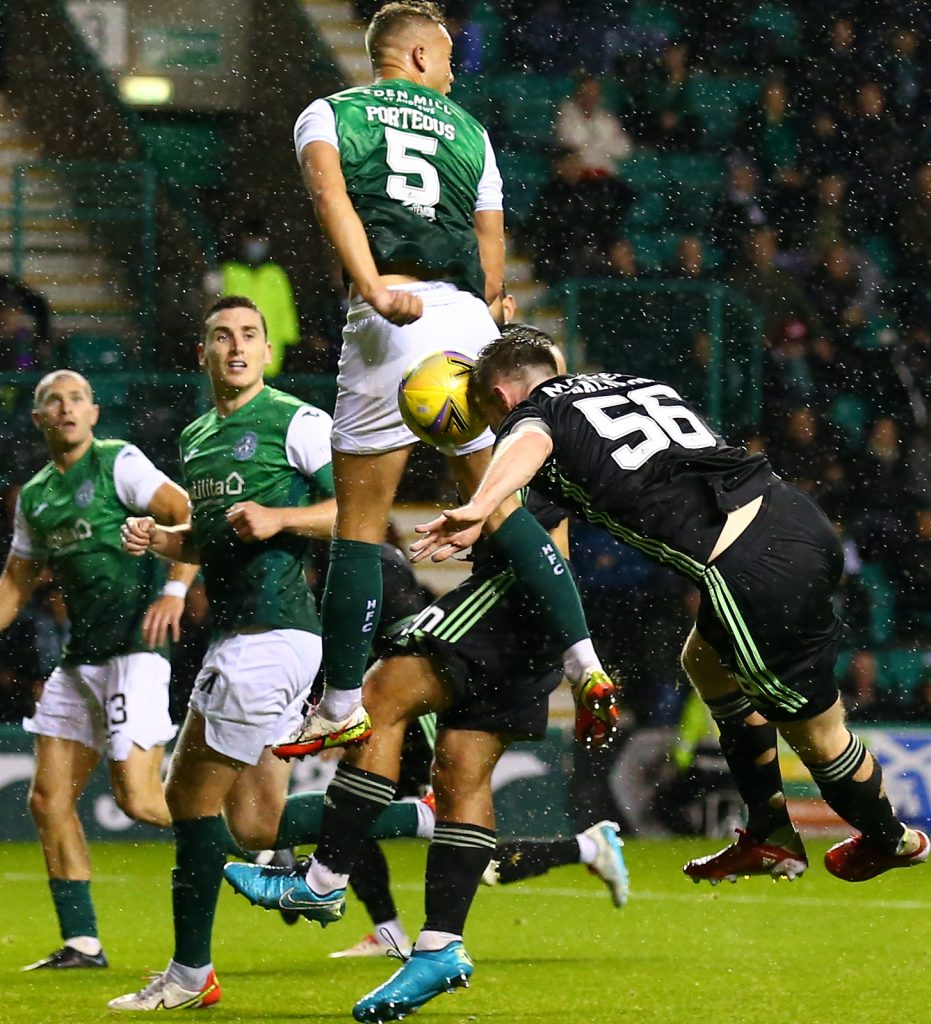 HEADS I WIN…Anthony Ralston times his connection to perfection.

HEADING FOR THE TARGET…Ralston dives forward as the ball zips past keeper Matt Macey. 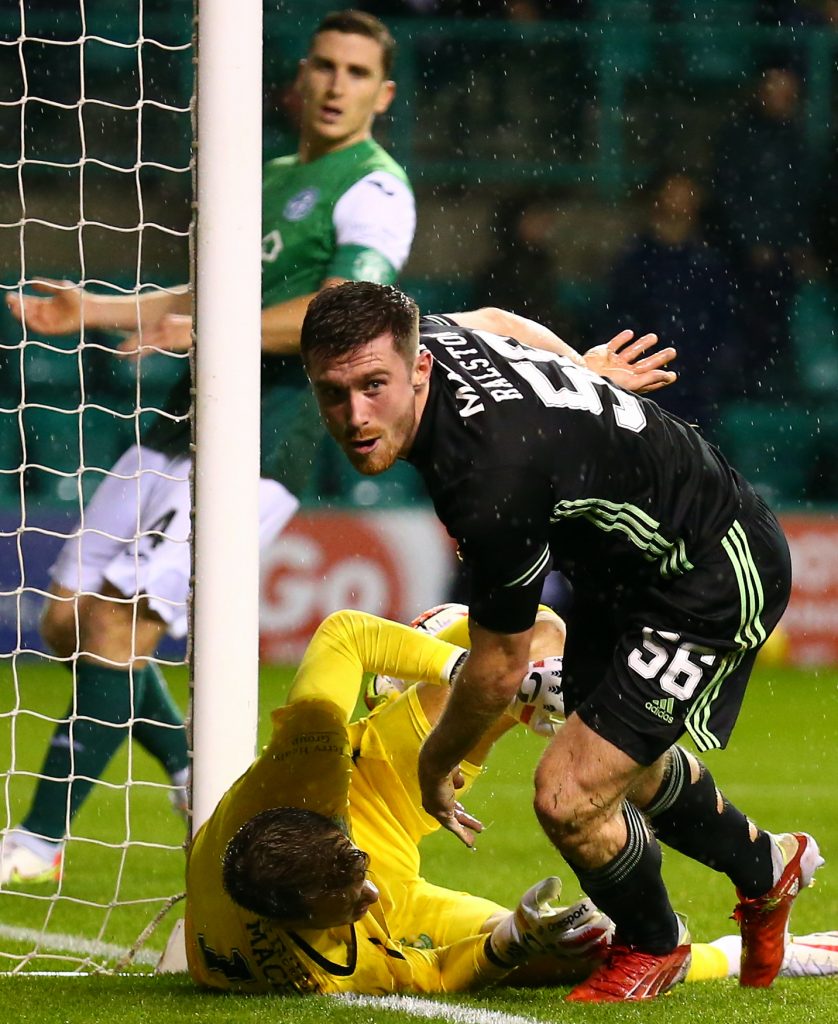 PICK IT OUT…Anthony Ralston turns away with beaten Matt Macey on the deck.

Ralston stooped to conquer against Hibs with a fine connection on a David Turnbull free-kick in the tenth minute to spark a three-goal blitz in half-an-hour with Cameron Carter-Vickers and Kyogo Furuhashi joining in as the team moved to withing two points of first place in the Premiership.

The Glaswegian, speaking to Celtic TV, said: “I’m glad to get another goal and contribute positively to the team.

“I work hard in training every day and when it comes to the game, I just want to put my all into it and do as much as I can for the team – that’s my job.

“In the first-half we were terrific – our movement, our speed of play. We were very direct, as well. Our front three were terrific in terms of movement and the midfield was also great.

“Come the second-half, we had to defend and Joe Hart made some excellent saves to keep the scoreline the way it was. 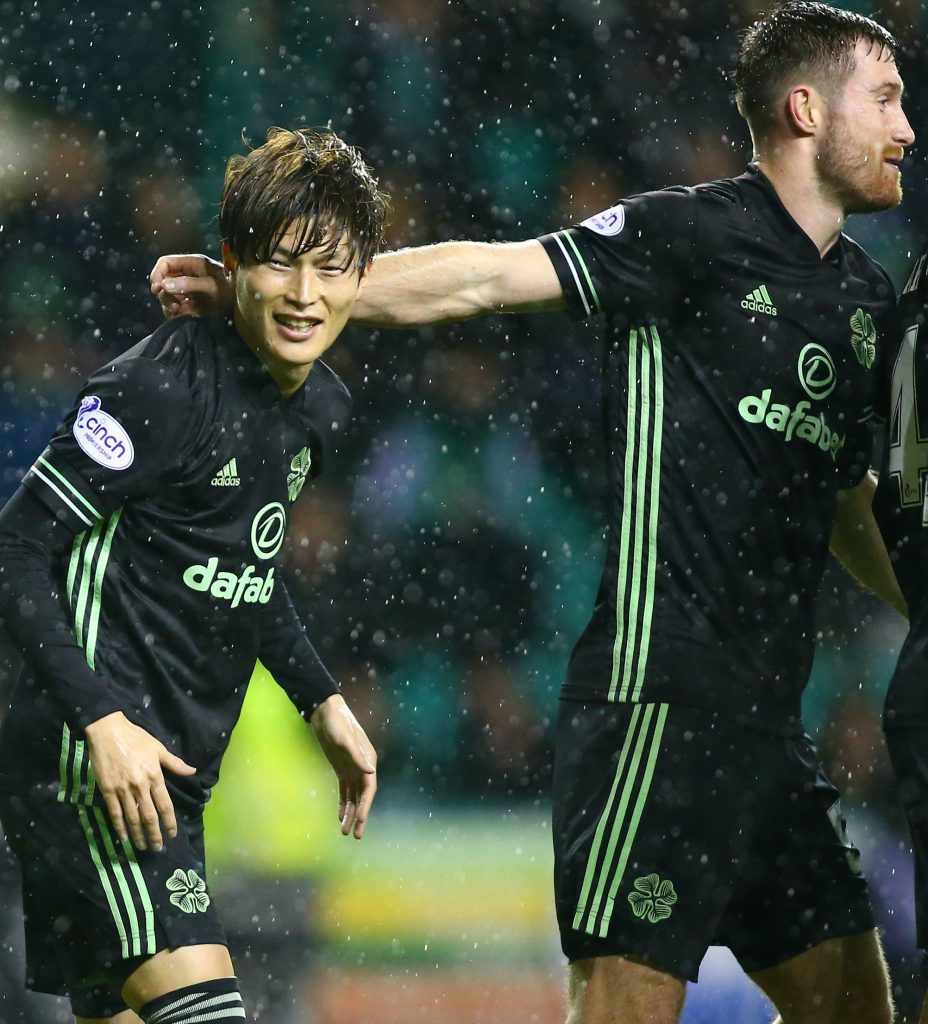 CELEBRATIONS – AT THE DOUBLE…Anthony Ralston congratulates Kyogo Furuhashi after the striker had added a third.

“We showed that we can go out and play and we can dominate the game, but we’ve also got that side as well to dig deep when we need to defend, so I’m delighted all-round.”

Ralston added: “The fans were terrific, filling that full stand. No matter where you go, they’re the best fans, so, as a team, we always appreciate them, coming through here on a terrible night and supporting us, and we feel that during the game.

“We’ve got big games to round off this period of the season before the international break, so it’s important that we go into each game the way we’ve been approaching the games so far, keep on this winning run and keeping the confidence high.

“We’re in a good place so we need to keep that going.”

Celtic can go top of the table – for 24 hours at least – if they beat Livingston at Parkhead on Saturday.

The life of Anthony Ralston has changed fairly dramatically since the last time he played against Livi in Glasgow.