Celtic Quick News on News Now
You are at:Home»Latest News»‘TWO OR THREE SHOULD HAVE GOT OUT,’ INSISTS CELTIC LEGEND
By CQN Magazine on 20th April 2021 Latest News

PAT BONNER reckons Celtic should have had a clear-out LAST season.

The legendary Hoops and Republic of Ireland keeper reckons his old club are a year late in their summer upheaval.

Bonner did not name any names, but it was clear at the end of the nine-in-a-row campaign there were players who appeared to believe their futures lay elsewhere.

The disgruntled French midfielder did join Marseille on loan in January, but the temporary switch to his homeland has not proved to be a success and he will almost certainly be returning to Glasgow in June.

Edouard had a miserable afternoon in Govan capping a wretched display with a feeble penalty-kick in the Scottish Cup exit. It looks as though he has four Premiership games to play before saying au revoir next month with Leicester City, Arsenal and Newcastle among his suitors from across the border. 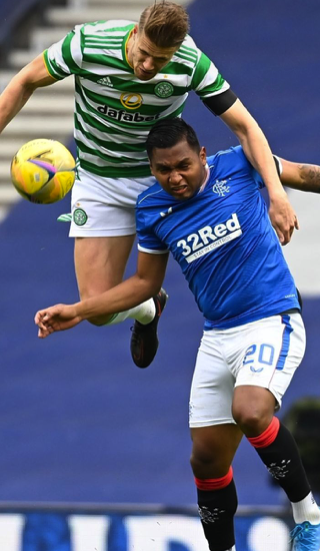 UP, UP…AND AWAY? Kristoffer Ajer outjumps Alfredo Morelos to clear a high ball.

Central defender Ajer has been mentioned alongside Serie A giants AC Milan while Christie has reportedly been interesting Southampton where he could line up with his former Hoops team-mate Stuart Armstrong.

All four players have a year left on their contracts and it appears to be clear the quartet will be moving on after the club’s first trophyless season in 11 years.

Bonner, in a report in the Scottish Sun, said: “There were too many players who thought they were going to get a big move and wanted out.

“Maybe that should have happened at the start of the season. Two or three of them should have got out and cleared the decks for others to come in.”

It looks as though they will get their wish. Alas, a year too late for Celtic who kept their top talent in their quest for the historic tenth title in a row.

A brave effort from the Hoops hierarchy that unfortunately was destined to failure.