The interim manager, who sampled defeat for the first time in six games since replacing Neil Lennon in February, raised a few eyebrows by dropping Greg Taylor and recalling Diego Laxalt at left-back.

The Scotland international had performed well in the 6-0 win over Livingston the previous week – the Hoops’ most emphatic scoreline of a wretched campaign – but the Uruguayan got the nod for the Cup-tie.

However, Laxalt was withdrawn after a catastrophic opening 45 minutes where he was slow to react to attacks on his flank that allowed Steven Gerrard’s men to score a double, Steven Davis hooking in an unfortunate deflection off Kristoffer Ajer and Jonjoe Kenny disastrously thumping a Joe Aribo cross into his own net.

Taylor came on after the interval to add stability to the left-hand side of the defence, but the holders could not claw back the home outfit’s advantage with Odsonne Edouard passing up two gilt-edged chances, one from the penalty spot. 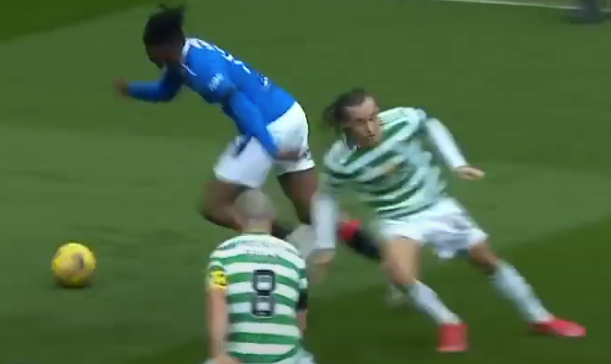 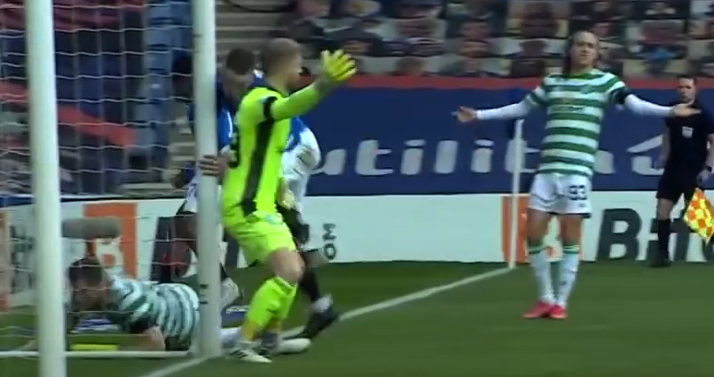 DON’T BLAME ME…Diego Laxalt pleads innocence as Jonjoe Kenny lies on the ground after firing the second goal past the stranded Scott Bain.

Collins pinpointed the AC Milan defender, who will be returning to the Serie A giants when his loan expires at the end of the season, as a flaw in the defensive formation.

The former midfielder and assistant boss said: “Celtic have had the worst season possible, everything has gone wrong for them. Diego Laxalt has been a shocking signing and how he played I will never know.

“His recovery runs, tackles and blocks. He was a weakness that Rangers exploited.”

Collins also argued there is no massive gap between the Glasgow teams, despite the fact his old club have failed to beat the Govan outfit in four games in an appalling season, losing three times. 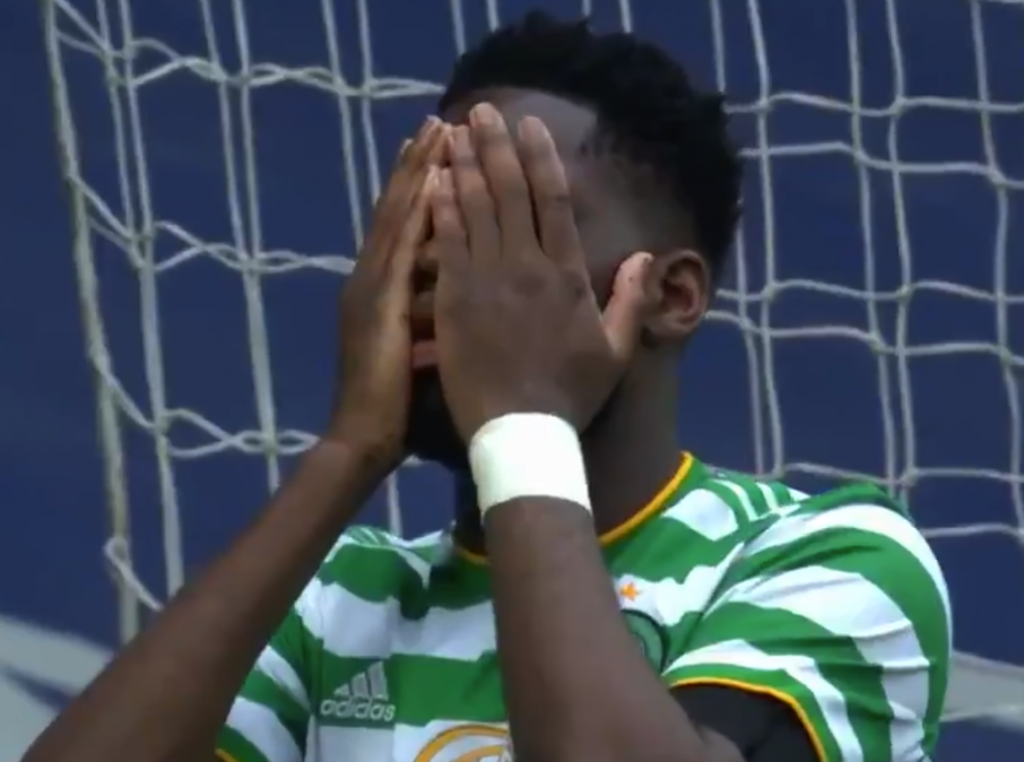 OH NO…Odsonne Edouard holds his head in his hands after his first miss.

It is worth noting, though, that the Ibrox club’s best player in the last three outings has been goalkeeper Allan McGregor who had to perform heroics to defy the Hoops while his team-mates have capitalised on lapses in the Celtic defence.

Gerrard’s team won the January 2 confrontation without having a solitary effort on target. The only goal of the game was a deflection from Callum McGregor that beat Vasilis Barkas.

In the 1-1 draw at Parkhead, the visitors had two shots on target – the goal from Alfredo Morelos after the Hoops had failed lamentably yet again to deal with a straightforward set-play, and a shot from Ryan Kent which was pushed away by Scott Bain.

At the weekend, the Parkhead No.1 had four efforts to deal with – the two that ended in the net and a double save from Kent and Morelos in the second-half.

McGregor, it must be noted, had more efforts on his goal to contend with in the Premiership encounter at the turn of the year than the Hoops netminders in the past three derbies. 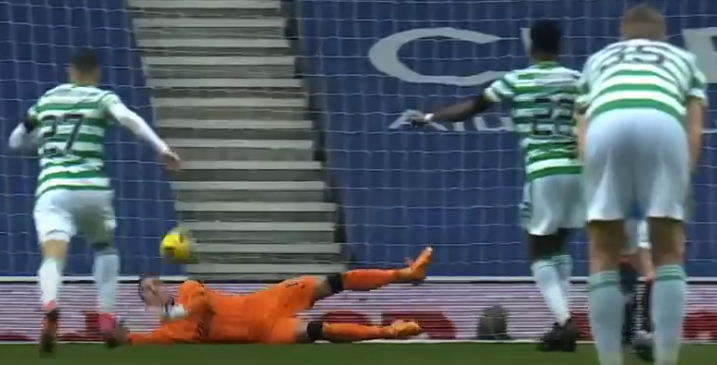 “Did they create more chances than Celtic? As a coach, you don’t analyse the result, you analyse the performance.

“What I’m just trying to say is there isn’t an enormous gulf.

“Rangers have been a better team, a more consistent team, week in week out. Celtic have chopped and changed the team.

“I just think Celtic don’t have natural wide players who are comfortable getting to the byline and that’s been their biggest problem all season.”