JOHANNES EDVALDSSON, a genuine favourite with the Celtic support from 1975 to 80, has passed away at the age of 70.

The versatile Icelandic defender was originally brought to the club by Jock Stein in the summer of 75 as he searched for a replacement for the legendary Billy McNeill who had retired after the 3-1 Scottish Cup Final victory over Airdrie at Hampden.

The move was put in motion before Big Jock’s near-death motorway car crash near Lockerbie that saw him hospitalised for a spell and ordered to take a back seat for the upcoming season with Sean Fallon put in charge.

The Hoops fans were intrigued at the possibility of landing the unknown Edvaldsson and wanted their first glimpse of the 6ft-plus international when he played as a trialist against Derby County at Parkhead on August 2 1975.

The supporters were not to know it, of course, but they were about to play a considerable role in Celtic’s signing of the player.

They rolled up in their thousands on a gloriously sunny summer’s afternoon for the challenge game against the English champions who boasted players such as Scotland international duo Bruce Rioch and Archie Gemmill and England’s Charlie George, Roy McFarland, Colin Todd and Francis Lee. 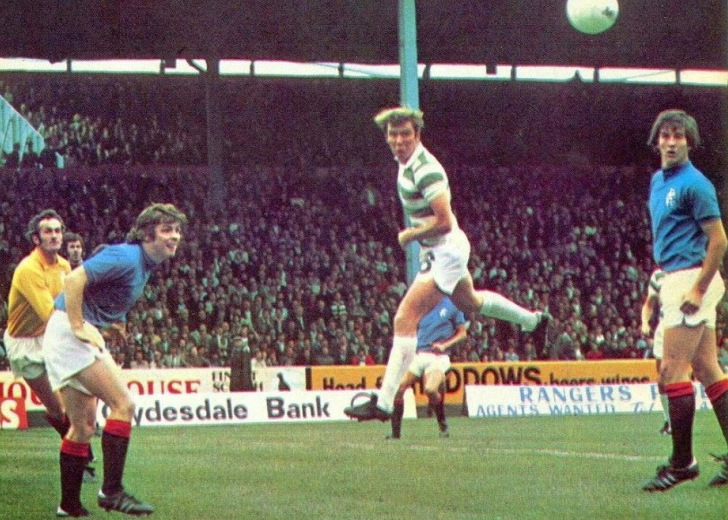 Celtic author Alex Gordon, who has written fifteen books on the club, told CQN: “I was at Parkhead that day. The place was absolutely packed. I had been there for massive European games and this was every bit as chaotic trying to get into the ground.

“I was there with a journalist friend – I worked as a Daily Record sports sub-editor at the time – and we gave up attempting to get into the traditional Celtic end.

“We walked round to the opposite end to see if we had any better luck gaining admittance. Eventually, we managed to get into the ground, but could only get a position right at the back of the terracing.

“If I recall properly, Celtic Park had been modified that year to hold something in the region of 67,000. This was a pay-at-the-gate game and the place was heaving. Prices back then were £1.20p for the upper stand, £1 for the lower deck and 60 pence for the terracing.

“It will never be proved otherwise, but I would have been amazed to discover anything less than a 70,000 crowd that day.

“Celtic, of course, were well-known for a little bit of ‘manipulation’ with the attendance figures back then although it would have been impossible to prove otherwise.

“Trust me, as a Celtic Park regular since the sixties, I had a fair idea of how many were in the ground, especially afternoon matches.

“Anyway, the place was crammed with Celtic fans when we got our first glimpse of the man who quickly became known as ‘Big Shuggie’. He looked the part, was good in the air, could pass and tackle, but not the most mobile on the ground.

“And he capped an excellent afternoon by claiming the only goal of the game around the hour mark. It wasn’t a spectacular effort, more a scrambled attempt from close range after a spot of penalty-box ping-pong following a set-play.

“We went home happy with the prospective new Bhoy’s performance, but I was intrigued to see what the Celtic board would release as official attendance figures for the match. They put out a crowd of 44,000. I was amazed. Somehow over 20,000 fans had gone missing!

“A couple of days later, Celtic announced the signing of Big Shuggie at £25,000. I am not alone in believing the Celtic support paid that transfer fee!”

Gordon, 68, added: “I met Shuggie a few times in a professional and personal capacity shortly afterwards. I lived in Burnside at the time and he moved in with his Scottish wife not too far away from me. He bought a clothing shop on Stonelaw Road around that time.

“I recall we were at a Player of the Year event in the old Albany Hotel in Glasgow and I was standing at the bar having a beer with Shuggy before the function kicked off. 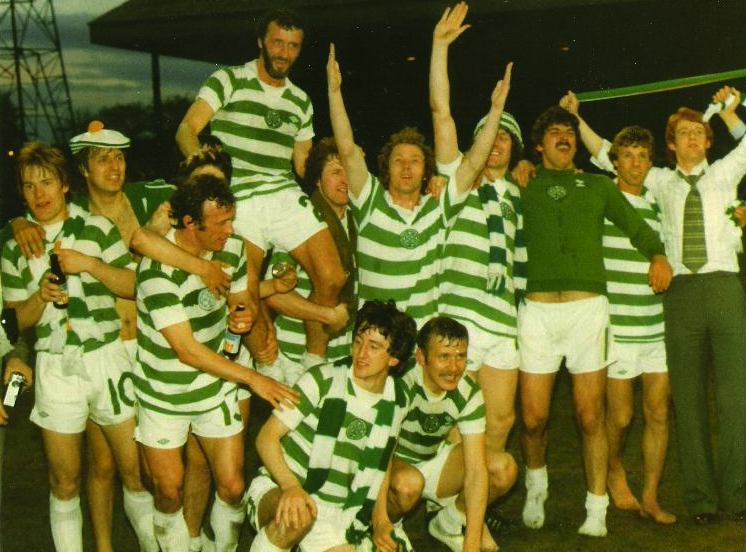 JOY BHOYS…smiling Johannes Edvaldsson, kneeling extreme right, celebrates with his Celtic team-mates after the breathtaking 4-2 title win over Rangers at Parkhead in 1979.

“As we chatted, he surreptitiously took his pint glass off the bar and lowered it to take it out of sight.

“I wondered why he was going through this strange manoeuvre. Then I looked across at the door and there was Big Jock Stein. He was having a survey of the bar and taking mental notes.

“Shuggie kept his glass below the bar as the Celtic boss looked around. Satisfied, Big Jock disappeared from view.

“The towering Celt smiled and said: ‘Mr Stein does not like his players to drink alcohol’. I doubt if Shuggie ever pulled the wool over the manager’s eyes, but, thankfully, we could get back to having a chinwag and a couple of beers before taking our seats.

“Johannes Edvaldsson had his health issues later in life, but I will always remember this gentle giant with a smile on his face. Rest In Peace, Shuggie, and thanks for the memories.”

The Icelander won two league titles and one Scottish Cup with the Hoops and also played for Motherwell.

In a career which brought him 34 international caps, he also played in South Africa, France, Denmark, the USA and Germany.

Former team-mate Murdo MacLeod tweeted: “Very sad to hear of the passing of Johannes ‘Big Shuggie’ Edvaldsson. Big part of the team when we beat Rangers 4-2 to win the league in 1979. My thoughts are with his family.”

MacLeod also tweeted a photo of the Celts squad which won the 1978/79 title under boss Billy McNeill.

Edvaldsson played 188 games and scored 36 goals for Celtic and built up a cult following among the Hoops faithful.