Celtic Quick News on News Now
You are at:Home»Latest News»BOYATA HAILED AS ‘IMMENSE’ AND ‘FOCUSED’
By CQN Magazine on 7th September 2018 Latest News

DEDRYCK BOYATA has been hailed as “immense” by his Belgian World Cup team-mate Jan Vertonghen.

The Celtic centre-half lined up alongside the Spurs in their nation’s central defence for three group games in the Finals in Russia during the summer.

Boyata dropped out when Manchester City skipper Vincent Kompany returned to full fitness to lead Belgium to third place in the competition.

However, the 27-year-old Hoops back-four operator had done enough in his trio of outings to impress Vertonghen who has amassed 108 caps for his country.

He said: “Dedryck has been with us for a while now, he is a great defender and a very smart guy.

“He had a great World Cup, he played because of injury, but he showed Belgium and the world how good a defender he is and he was immense for us.”

Boyata’s display in his third and final game against England, with the Belgians winning 1-0, attracted the attention of newly-promoted Fulham who launched a £9million bid for the player before the Premier League transfer deadline on August 9.

The champions rejected the bid for Boyata, who had only 10 months to run on his contract and who had refused to agree an extension. 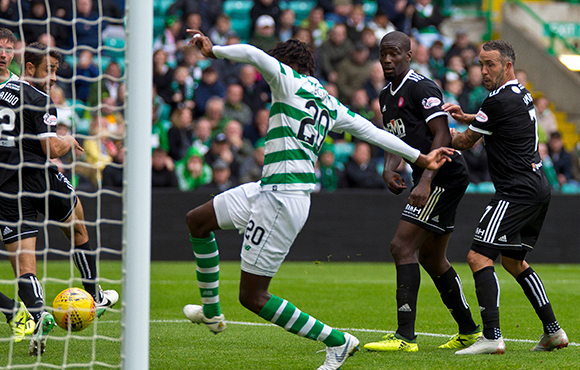 BACK WITH A BANG…Dedryck Boyata scores the winner against Hamilton Accies.

It looked as though his Hoops career was over when he was a no-show for the crucial Champions League qualifiers against AEK Athens, but he came back to score the only goal of the game against Hamilton Accies three matches ago and has remained in position ever since.

Boyata has also been backed by international gaffer Roberto Martinez who will pit his wits against Scotland boss Alex McLeish in tonight’s friendly at Hampden.

The Spaniard said: “I think we all need to understand that when a player performs as well for a club then in the window you will get other clubs interested and there will be a question of setting values.

“That will be an inconsistent period for everyone. Now the window is closed, Dedryck can focus and all he wants is to do is perform well for Celtic. That is what he’s been doing. What happened is more a symptom of the modern game than something to do with Celtic and Dedryck.

“I think we can see how much Dedryck has grown since working with Brendan Rodgers at Celtic – he is a very important figure in that team.

“When you have interest in an important player there is always an instability in the transfer window. Now we will see Dedryck giving everything he has in order to win trophies for Celtic.

“This week, I have seen Dedryck focused and looking forward to contribute to the team and you should not underestimate how well he has progressed over the last 16/18 months.

“Now you have a Dedryck Boyata that is hungrier than ever who is in the best moments of his career.

“He played well at the World Cup, won titles with Celtic and he has always been respectful of the club and Celtic itself.” 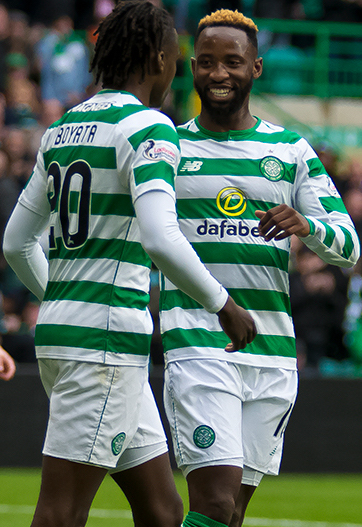 HELLO – AND GOODBYE…Boyata is welcomed back by Moussa Dembele who quit the club for Lyon on deadline day.

Martinez added: “The Rangers game showed him back to his best. The window allows a moment to look at options and once that is closed you will see a stronger Dedryck Boyata.

“When a player is desperate to learn and win silverware than there can be a good relationship for the future.

“You never know what will happen in football because there is such a level of unpredictability.

“Sometimes careers are fragile – you are one injury away from changing the direction of your career and that’s always part of the footballer’s mind.

“What you do get when Dedryck plays is that his full focus is on winning games for Celtic and that has been proven in the last week.

“He’s very mature in that respect. It won’t change no matter his contract situation.”