EXACTLY 14 years and five days ago, Scott Brown scored with a spectacular diving header for Hibs against Celtic at Easter Road – just THREE days after signing for the Hoops.

The all-action midfielder agreed a pre-contract with Gordon Strachan and would rubberstamp his £4.4million switch at the end of the season.

Brown took off Superman-style to get his head to a cross to send an effort crashing into the net above Mark Brown for the equaliser four minutes after his former Edinburgh club team-mate Derek Riordan had given the visitors the lead in the 56th minute.

The home side capped a spirited fightback with a winner in stoppage time from Ivan Sproule. Strachan’s men still won the league, though. 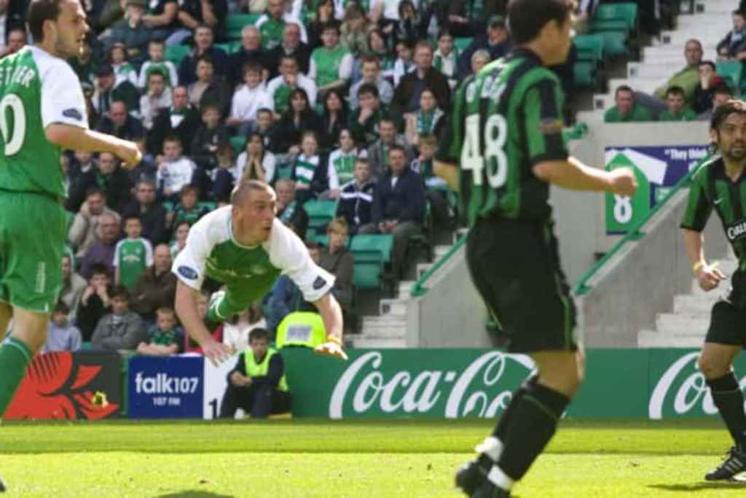 HE FLIES THROUGH THE AIR…Scott Brown thumps in Hibs’ equaliser against Celtic – 14 years ago. 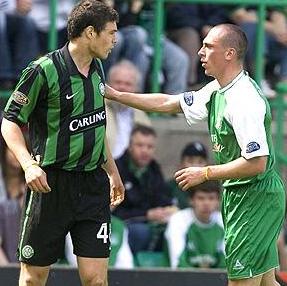 Interestingly, Brown was up against John Kennedy that afternoon – the same John Kennedy who will take the Hoops to Easter Road this afternoon as the 35-year-old warhorse brings down the career on his glittering Hoops career before he joins Aberdeen on a two-year contract as player/coach.

Playing alongside the current interim manager in Leith was Stephen McManus who will also be in the dug-out in the capital today. Darren O’Dea, who is another member of the Celtic backroom, also performed in the back-four that afternoon.