CHRIS SUTTON has applauded the Celtic hierarchy for their ambitious £17million attack on the transfer market this summer to deliver the players targeted by Ange Postecoglou.

Filipe Jota became the fourth crucial signing in three weeks when he brought an end to his personal saga by agreeing a five-year deal with Benfica receiving an initial £6.5million for the 23-year-old winger.

Twenty-four-year-old Cameron Carter-Vickers sealed his £6million switch from Spurs on June 10 after the US international central defender excelled during his season-long loan from the London club. 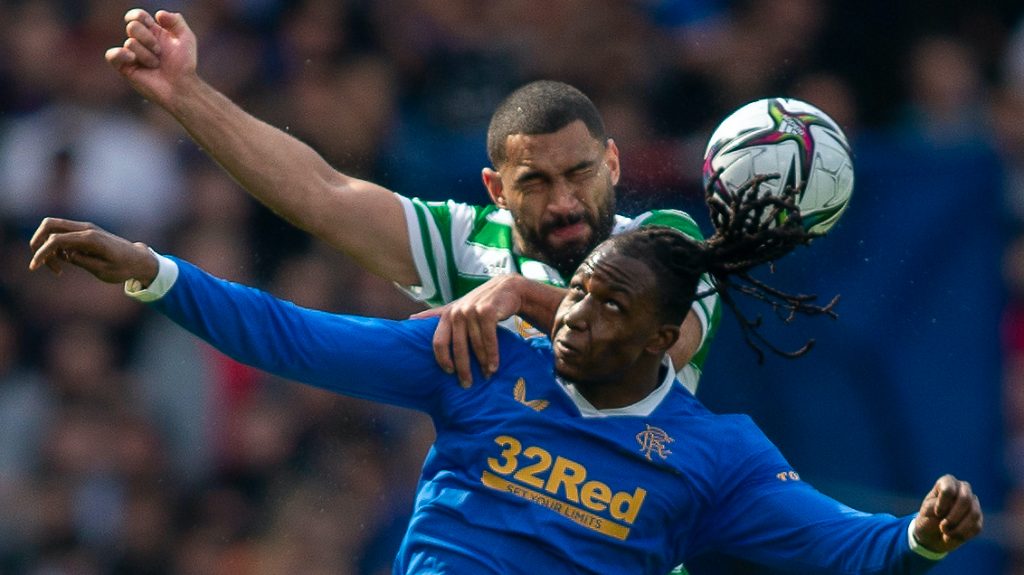 HEADS IN WIN…Cameron Carter-Vickers climbs above Joe Aribo to clear a high ball.

Swiss keeper Benji Siegrist, 30, was next to arrive on a four-year contract after becoming a free agent following four seasons at Dundee United.

And 21-year-old left-back Alexandro Bernabei sealed his five-year switch during the week when he moved from Argentinian top-flight club Lanus to the Hoops to provide competition to Greg Taylor in the No.3 position.

Remember, too, Daizen Maeda formally joined on a permanent deal in May after his initial loan agreement arrival at the turn of the year. The champions reportedly shelled out £2million for Postecoglou’s former forward at Yokohama F Marinos.

And there is more to come as the 56-year-old Greek-Australian gaffer continues to put the jigsaw together during his third transfer window after taking charge just over a year ago. 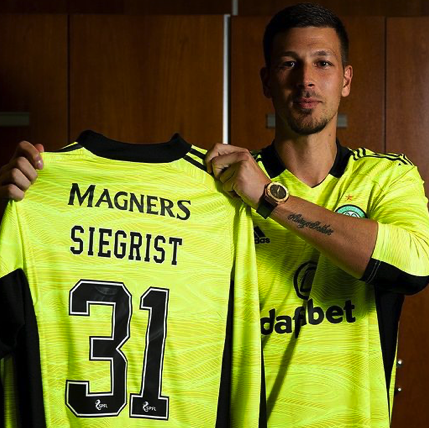 GETTING SHIRTY…new keeper Benji Siegrist holds aloft the No.31 jersey.

Former striker Sutton is massively impressed by the actions of his old club and said: “Celtic have made a £17million statement. On the back of last season’s title win, I felt it was imperative that the club built from a position of strength.

“Full marks to them so far. They have blasted out of the transfer blocks with impressive investment.

“It’s sometimes easy in the footballing world just to toss figures around. But to have outlaid that amount of cash by the first Saturday in July means the two key departments of Celtic are working excellently.

“The footballing department with Ange Postecoglou and his recruitment staff are really on-point here. Identifying areas quickly and the hierarchy of the club are also doing their bit to support their boss. Taking his visions and funding them.

“There is a conviction about this. Deals are being put in place early again, just as they were in January when Postecoglou identified Reo Hatate, Daizen Maeda and Yosuke Ideguchi as mid-season targets and the board delivered them on the first day of the month.” 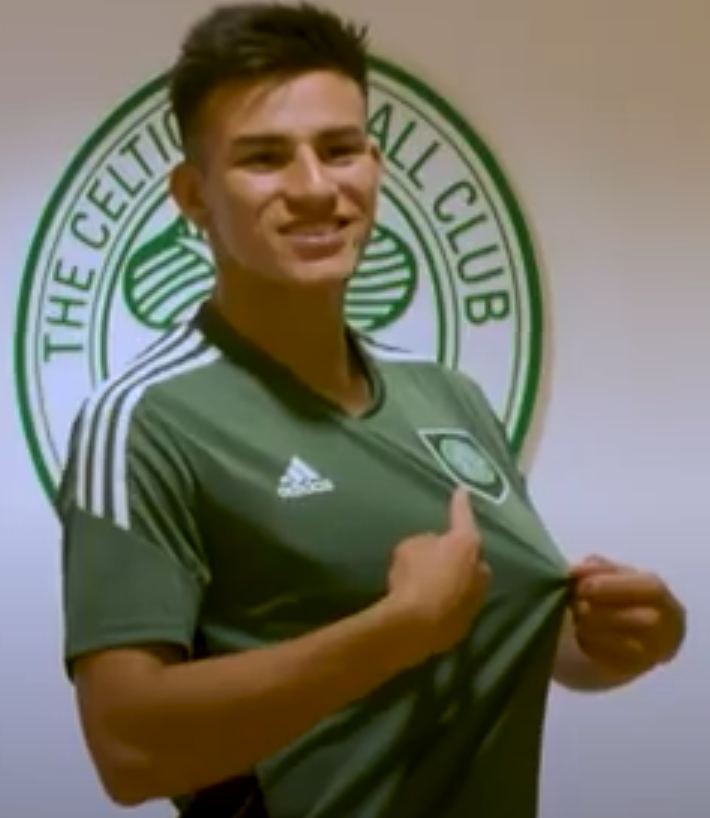 The club bosses also supported the manager when MK Dons midfielder Matt O’Riley and teenage Sligo Rovers striker Johnny Kenny were flagged up and they were added to the J-League recruits.

Sutton, speaking to the Daily Record, continued: “The boss has earned the right for serious backing with his previous Parkhead work in the market and was responsible for giving the club a fantastic platform to go on and make the additions that he wants.

“Unlike past years, no worrying about what money is coming in without knowing if the team is going to get past the Champions League qualifiers. No need to have to wait until the end of August to tell players if they have group stage football or not or whether the finance is coming through the door to pay for deals.

“Celtic know the lie of the land, but the most important thing is that they are making best use of this knowledge and taking advantage. I’ve been critical in the past of Celtic’s workings in the market. Taking too long to get things in place. Leaving managers piecing together makeshift defences for Champions League qualifiers and having squads half-built when those big games come around.

“But you have to be fair about it. These were times when the chiefs couldn’t guarantee group stage money and had to be watchful in case it didn’t arrive, which in several cases it didn’t. 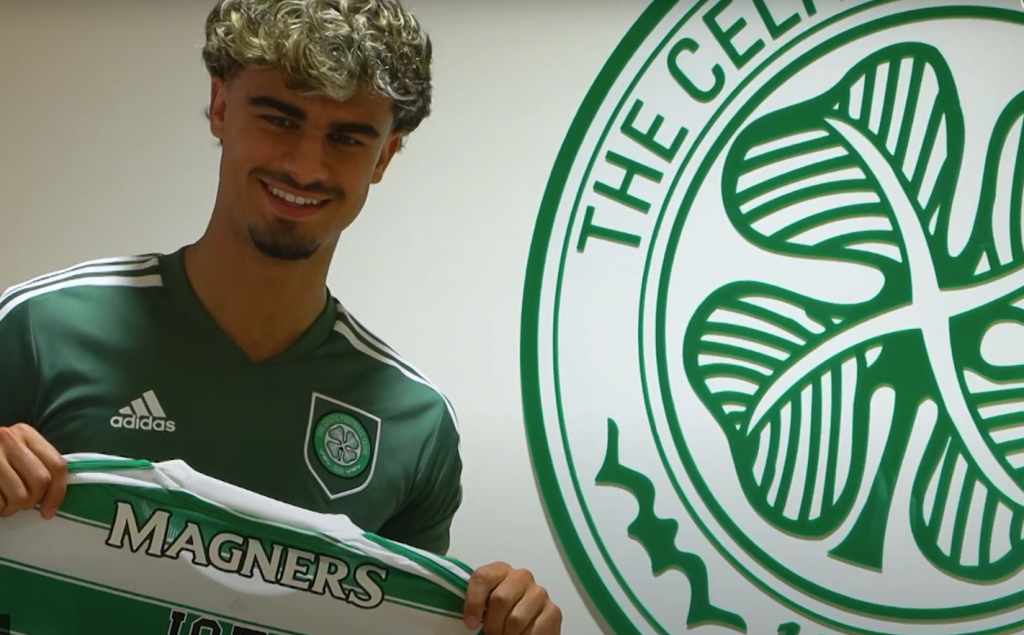 “Postecoglou has been brilliant in the market so far during his time at the club and, what I like about this summer’s dealings, is that there seems to be a clear plan. Every Celtic supporter could see the positions which needed to be sorted and strengthened. Cameron Carter-Vickers was the best player in Scotland last season. He had to be tied down.

“Despite interest from elsewhere, it was done. Not for peanuts. For the initial sum of £6million. Jota was absolutely magnificent for the team with his goals, assists and flair and he was another who had to be secured.

“Again, deal done on the first day of the international window opening. In place for the pre-season trip to Austria. Again, at no little cost with around £6.5million shelled out.

“It was obvious that Postecoglou was going to need some quality cover behind Joe Hart for the goalkeeping position because Vasilis Barkas wasn’t up to it. Greek shipped off to Utrecht and Benjamin Siegrist, proven in the Premiership, brought in.

“Left-back is an area which needed to be addressed. Greg Taylor did a good job for the manager during last season’s run to the title, but stepping up to the standard of the Champions League is a big task and beyond the likes of Adam Montgomery and Liam Scales at this stage. 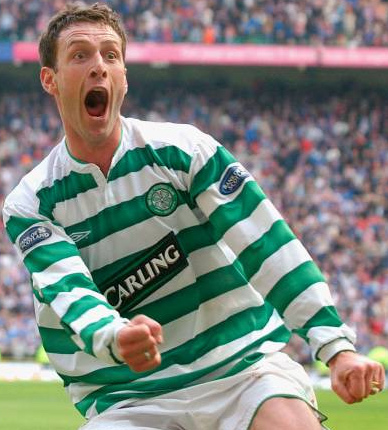 “Postecoglou has gone to Argentina to find Alexandro Bernabei and the board have pushed out monies which could total £3.75million to get him. That’s a lot of cash at this moment for a 21-year-old with no experience out of his country, yet the manager’s transfer record tells you the full-back will be an excellent addition and will likely have settled and quadrupled his value inside 12 months, just as Josip Juranovic has done since signing.

“The money to transfer Maeda’s initial loan agreement from Yokohama Marinos topping up the outlay at this point. More are needed and will follow.”

Sutton, who went on to become a Celtic goal hero after being signed for £6million by Martin O’Neill in the summer of 2000, has identified a midfield enforcer being a requirement to the squad, an addition CQN insisted was a must back in April.

Nir Bitton, who has just agreed a two-year deal with Maccabi Tel Aviv, left the club in May while it looks as though Ismaila Soro will be joining him through the Parkhead exit, either on loan or a permanent agreement. 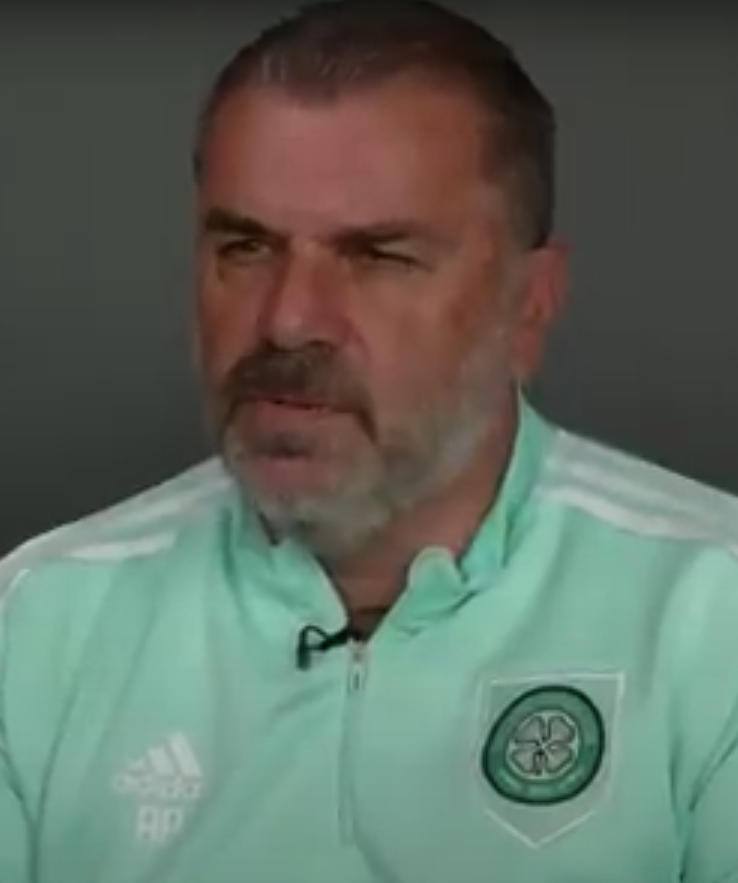 BIG-NAME HUNTER…Ange Postecoglou is still on the look-out for new arrivals.

Brazilian Vinicius Souza, of Belgian outfit SC Lommel, is on the radar and the one-time Hoops hitman reckons Postecoglou will also be looking at strengthening the middle of his rearguard with Christopher Jullien’s immediate future hanging in the balance with the possibility of a switch to Bundesliga club Schalke still a possibility, despite reports of a financial hitch.

Sutton added: “The fact Celtic had agreed a loan deal and the Frenchman travelled to Germany for talks tells you he is not seen as part of the planning. That means another centre-back is on the agenda. More recruits are on the way and Celtic are doing this right.

“The manager said at the end of the season that Celtic would be back this bigger and better because they never stop.

“And, of course, you can only make proper and fulsome judgements at the end of a window. But early transfer signs are that Postecoglou and the club will deliver on his promise.”