Celtic Quick News on News Now
You are at:Home»Latest News»DEAL OR NO DEAL? JULLIEN UPDATE
By CQN Magazine on 1st July 2022 Latest News

CHRISTOPHER JULLIEN’S move to Bundesliga side Schalke could be revived.

It looked as though Celtic’s 29-year-old central defender’s hopes of an initial loan move leading to a £1.5million deal were over after a financial hitch in negotiations, as CQN reported.

Jullien, who passed a stringent medical test on Wednesday, failed to agree terms with the newly-promoted club and that opened the door for Ligue 1 duo Rennes and Lorient to step up their interest in the towering centre-back who cost £7million when Neil Lennon signed him from Toulouse in June 2019. 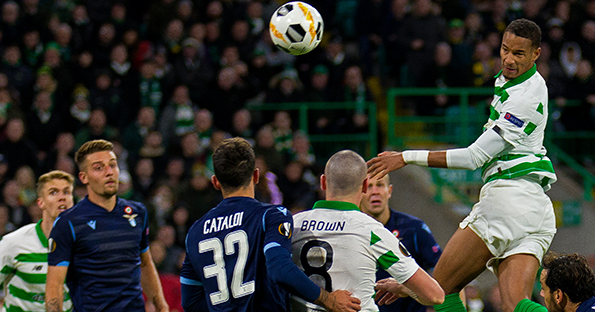 HEAD BHOY…Christopher Jullien thumps in the Europa winner against Lazio at Parkhead in October 2019.

However, reports insist Schalke are ready to get round the table again to thrash out final details with the back-four performer who has played for only 16 minutes in the past year and a half when he came on for a cameo role in the 4-0 Scottish Cup win over Raith Rovers in February after requiring knee ligament surgery following a collision with a goal post in the 3-0 victory over Dundee United on December 30 2020.

French football publication Goal say: “The arrival of Christopher Jullien at Schalke 04 is not completely ruled out. Discussions are continuing between representatives of the players and the Ruhr club.”

However, the report added ominously: “There is still no agreement between the two parties.”

There will be further negotiations over the weekend which could resolve the situation to get the player some much needed game-time.