CELTIC legend John Hughes insists Ange Postecoglou should think about bringing in a midfield enforcer in the summer transfer window.

The Hoops great, the club’s seventh-highest goalscorer with 189 strikes, reckons the manager deserves massive praise for how he has reshaped the squad after last season’s shambles.

But the juggernaut forward, known as Big Yogi to his legions of adoring Parkhead fans, thinks the middle of the park could do with a welcome addition.

In another CQN EXCLUSIVE, Hughes, 79, spoke to author and friend Alex Gordon, who co-wrote the former player’s best-selling autobiography, ‘Yogi Bare: The Life and Times of a Celtic Legend,’ which was published in 2014.

The Lisbon Lion said: “Watching Celtic this season, I have to say I have thoroughly enjoyed what Ange Postecoglou has brought to my old club.

“He inherited a shambles with key players such as skipper Scott Brown, top scorer Odsonne Edouard and internationals Kristoffer Ajer and Ryan Christie heading for the exit.

“There were other problems that needed addressing right away – the goalkeeper and central defensive positions, for a start. 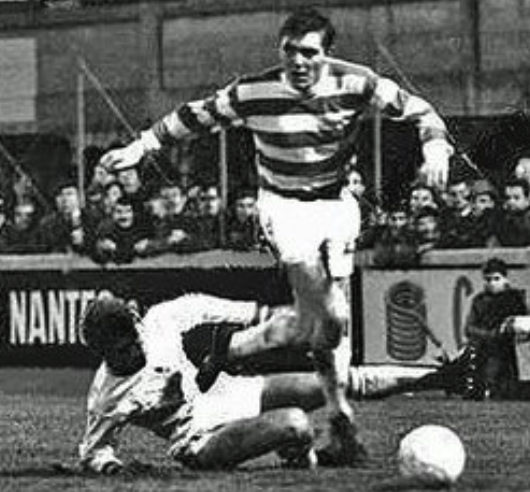 IN CONTROL…Bobby Murdoch leaves a Nantes player in his wake as he races forward on Celtic’s way to a 3-1 win in France in 1966.

“He has hit the ground running and I can’t see Celtic failing to win the Premiership next month. Yes, there is hard work to be done and we are not the finished article.

“We saw that at Hampden on Sunday. The opposition had a desire and a hunger for the fight and they won the battle of the midfield.

“Celtic weren’t helped by the fact their ball-players were not given any protecting by an overly-lenient referee in Bobby Madden. How John Lundstram escaped any sort of card will remain a mystery.

“I counted three fouls I believed warranted a yellow at the very least, but the match official was content with awarding a free-kick without a word of caution to the Ibrox player. 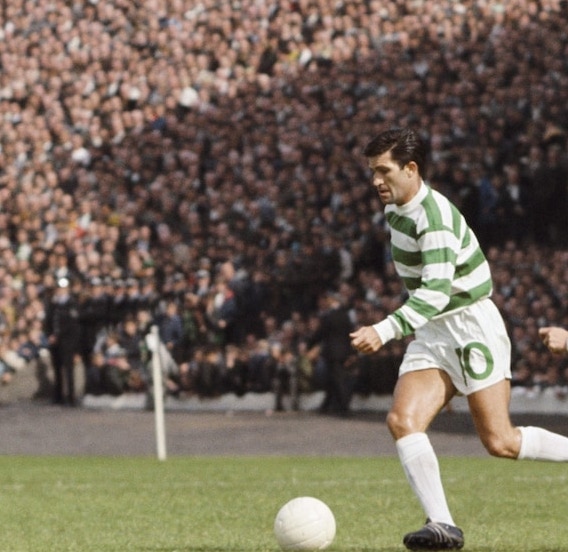 SPACE MAN…maestro Bertie Auld enjoys the wide open spaces of Hampden Park in a 3-3 pre-season draw with Spurs in 1967.

“If you look at our middle of the park, it is festooned with excellent ball-players. The likes of Tom Rogic, Callum McGregor, Reo Hatate, David Turnbull and Matt O’Riley all want to get the ball down and play the game the way it should be played.

“They were knocked out of their stride at Hampden and rarely got the opportunity to put their passing game together.

“Nir Bitton was missing from the squad and watched the game from the stand, so presumably he wasn’t deemed 100 per cent fit. James McCarthy and Yosuke Ideguchi were on the bench and the jury is still out on those guys.

“Credit to the opposition who did go about their task with a fair degree of relish, but I couldn’t help wishing Big Ange had someone such as my old mates Bobby Murdoch or Bertie Auld or Davie Hay to call on.

“There is no way you could call any of those guys cloggers, but they knew how to tackle and I never saw Bobby, Bertie or Davie ever intimidated by an opponent.

“There wasn’t much of Wee Bertie, but he could take care of himself, that’s for sure. Bobby was a powerful figure with a lovely, delicate touch, but he was another no-one messed with.

“I recall a league game back in the sixties when a particular defender was practically playing keepy-uppy with Wee Jinky Johnstone. 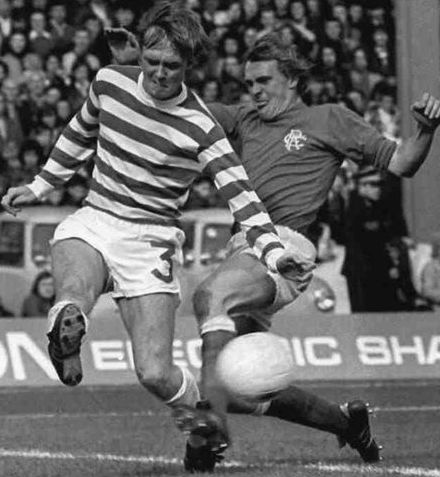 “The referee that day was looking the other way as our little winger was scythed down time and time again. Bobby had a word with the opponent when there was a lull in play. I have no idea what was said, but the rival left-back toned down his aggression for the rest of the game.

“Davie, too, wasn’t frightened of anyone. I know he preferred playing full-back, but Jock Stein would often put him in midfield when we were up against Rangers.

“John Greig, the Ibrox captain, could ‘put it about,’ as they say, so Big Jock would often play Davie right up against the Ranger. It worked a treat.

“As I said, it has been a joy to watch what Ange has done with the team after the wreckage of the previous campaign.

“He has brought in 17 players in both transfer windows and most of his signings have been inspired.

“However, I believe there is a piece of the jigsaw still to be put in place and I have every confidence the manager will rectify the situation in the summer.”