ON Saturday, May 26 2001, the sun beamed brightly on Hampden and Martin O’Neill as he brought down the curtain on his history-equalling first season as Celtic manager.

Only the legendary Jock Stein had achieved the domestic clean sweep before in the Hoops’ history – and he did it twice, in season 1966/67 and 1968/69.

But the Irishman would not be sidetracked as he eyed the spectacular hat-trick at the national stadium on a perfect day. 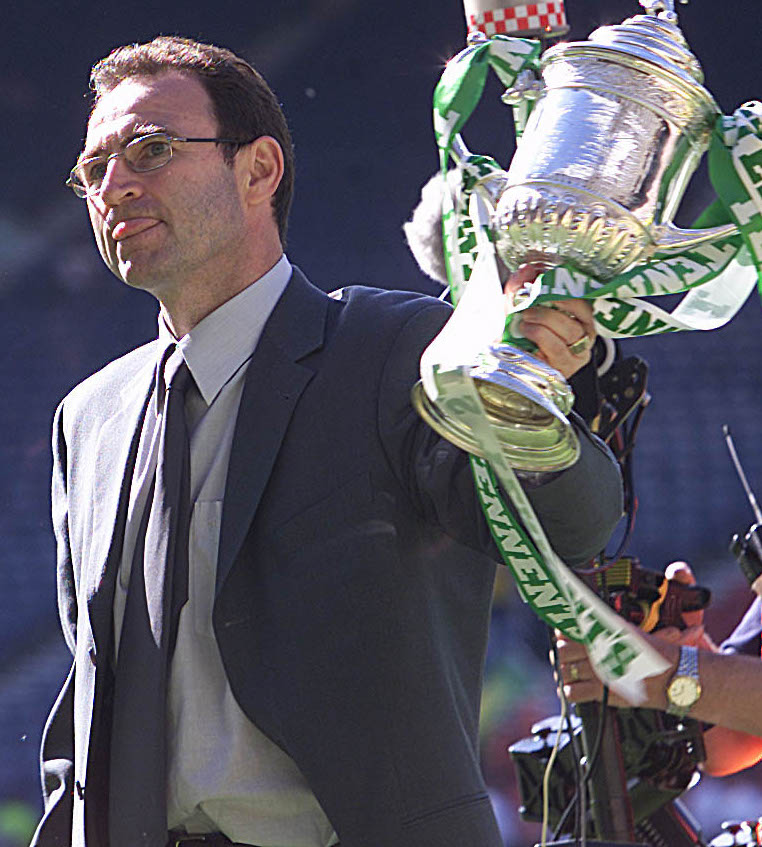 THE CUP THAT CHEERS…Martin O’Neill holds aloft the Scottish Cup.

THE Hampden meeting between Martin O’Neill’s Celtic and Alex McLeish’s Hibs had been called the “The Green Party”.

Nice title, but totally inaccurate because neither team were allowed to wear their normal strips and both had to play in their change strips; the Parkhead men in their gold tops and the Easter Road side in white shirts.

O’Neill didn’t concern himself with the SFA’s newly-found fixation with colour clashes and, instead, sent out his strongest team as he attempted a clean sweep in his first season in Scotland. Henrik Larsson, hat-trick hero against Kilmarnock in the League Cup Final, was in his usual place alongside his trusted ally Chris Sutton.

Alas, little Slovakian maverick Lubomir Moravcik lasted a mere eighteen minutes before hobbling off to be replaced by Jackie McNamara. And it was the substitute who pushed the Hoops towards a half-time advantage when he was set up by Larsson who sent him free into the box with a neat pass.

McNamara took an awkward first touch, but recovered in an instant to spear a low shot wide of the motionless Nick Colgan. He drew praise from manager O’Neill afterwards who said: “Jackie took the first goal brilliantly and, naturally, I was very pleased with that. It was a great pass from Henrik, but he still had to put the ball in the net.” 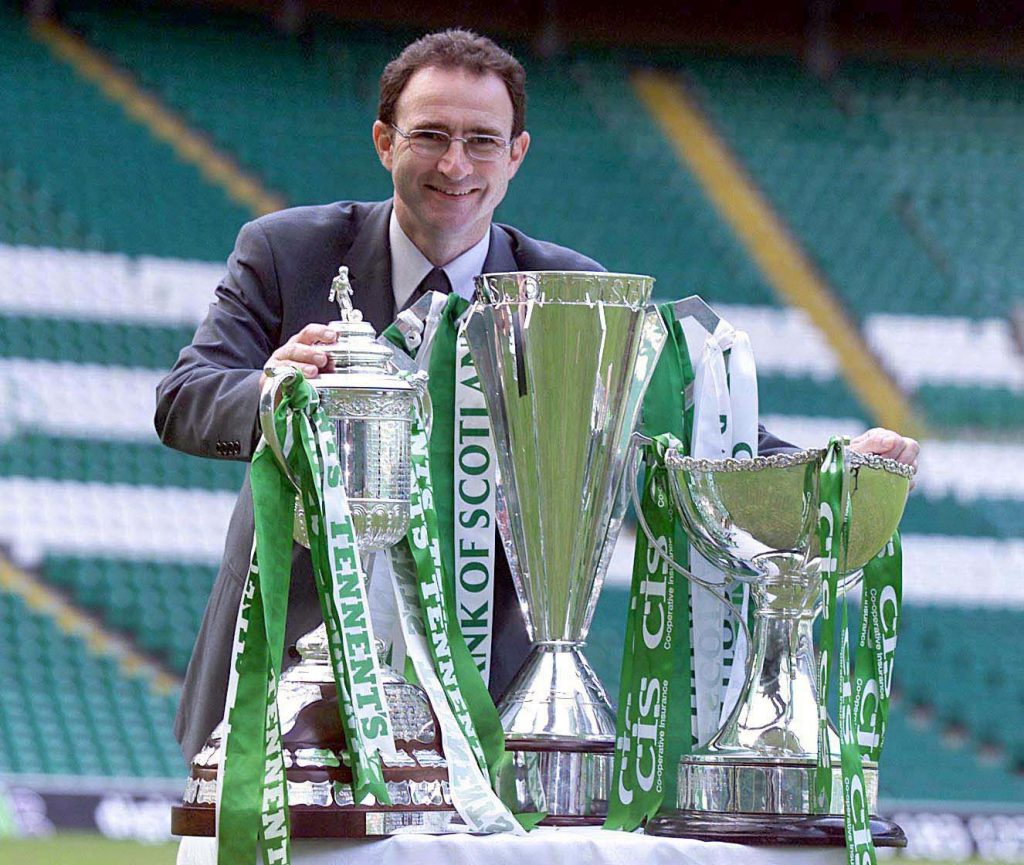 THE HAT-TRICK…Martin O’Neill with the glittering prizes after his fabulous debut campaign as Celtic manager.

Three minutes after the break, Larsson whipped a first time effort from the edge of the box high into the net for the second goal and, with ten minutes to go, the unstoppable Swede was hauled to the ground by Gary Smith for referee Stuart Dougal to award a stick-on penalty-kick.

Larsson dispatched it with his usual excellence and as the ball thudded behind Colgan, the astonishingly prolific hitman realised he had notched up his fifty-third and final goal of an incredible season. Celtic had also claimed their thirty-first Scottish Cup.

Didier Agathe enjoyed scampering down the right in the wide, rolling spaces of the Hampden playing surface and teased and tormented Ulrik Laursen, the Easter Road left-back.

O’Neill, though, must have seen some qualities in the Danish defender because he invited him to join Celtic that summer. The thought of never having to again face Agathe in public under the gaze of thousands might have hastened his answer in the affirmative.

At the end, Larsson said: “We won the league early, then the League Cup and everyone had been going on about the treble and how much it would mean to the club. Now we can talk about it, Now there are no problems. This was the one I hadn’t won yet in Scotland.

“However, I’ve won it today and I’m very, very pleased. The second goal gave us a bit more breathing space and then we could sit back a little bit and try to pick them off . When we got the penalty-kick that was it finished.”

A smiling O’Neill added: “It’s been an enormous season for everyone and to finish it off today in front of our supporters at a packed Hampden is just sensational. Today is about the players and the supporters. I’m so, so pleased for both sets. The players have had to rouse themselves again for another big occasion, but I never thought there would be a problem because there is no sign of tiredness.

“As I said, Jackie took his goal magnificently and the second from Henrik so soon after half-time settled everything. Now I just want time to enjoy this before I even think about next season.” 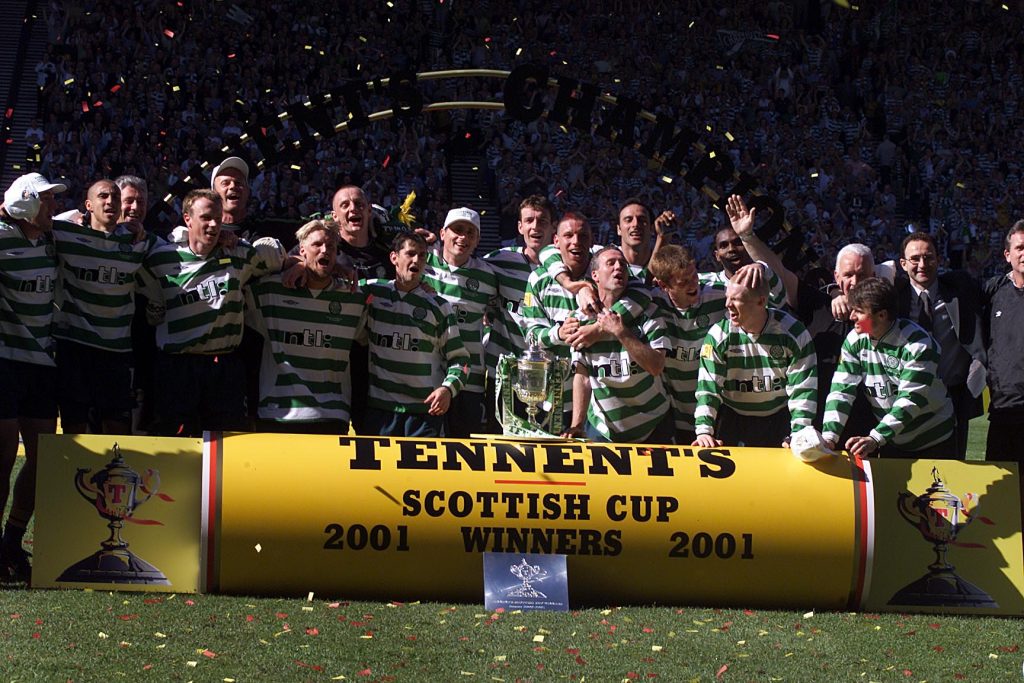 THE JOY BHOYS…the Celtic players celebrate after their runaway three-goal success over Hibs.

Neil Lennon added: “It’s been unbelievable since I came up here in December. Honestly, I did not expect this to happen. Not at all. I thought I was coming up to join a team to give Rangers a run for their money in the league. We’ve surpassed everything that has been asked of us. I’m now going to take it easy for a few weeks and reflect on this season.

“Mind you, we have now set ourselves exceptional standards and we’ll just have to do it all again next season.”

* TOMORROW: Brendan Rodgers arrives in May 2016 – and steps straight into Celtic history.