THE Celtic manager was far from impressed with the recent form of his team and observed: “Looks hellish, doesn’t it?”

At the end of the season, though, the same Hoops boss was celebrating a monumental league title success – the thirty-fourth in the club’s glorious history – after all looked lost at one stage.

Davie Hay was the man in charge of the club in the extraordinary 1985/86 campaign and Neil Lennon might care to delve into the past if he is looking for inspiration as he attempts to get the team back on track after falling a massive 21 points off the pace in the bid to make history with a tenth successive championship. The club have three games in hand – and a potential nine points – but it will take an almighty Herculean effort to get back into pole position.

Going into tomorrow afternoon’s vital Premiership encounter against Livingston at Parkhead, the Irishman realises nothing but a victory will be acceptable. The pressure is on – as it was all those years ago with the man known as ‘The Quiet Assassin’ who is a club ambassador these days.

Author Alex Gordon recalls that momentous season in his latest Celtic book, ’50 Flags Plus One’, when Hay and his players battled with vim and vigour right until the very last to clinch the crown in one of the most tumultuous terms since the club came to life. The club legend was forced to do some soul-searching following a terrible run of three consecutive defeats to Dundee United (0-3), Aberdeen (1-4) and Rangers (0-3) before the turn of the year.

Here is an edited extract from Alex’s fifteenth Celtic book.

“Looks hellish, doesn’t it?” observed Hay as we researched one of the most extraordinarily suspenseful seasons in Celtic’s folklore. “Doesn’t look like title-winning form, that’s for sure.

“At no time, though, was I willing to throw in the towel. There was never any chance of that. I had to have a look at myself. There was no dodging the facts. I had to get the players performing with confidence again. They had to accept the responsibility that comes with being Celtic players.

“There’s a burden on you to deliver as soon as you pull that shirt over your head. Jock Stein continually hammered that into his players. He was driven towards making this club the very best. That gets through to you.

“He was relentless. I was my own man, of course, standing and falling by my own decisions, but I had to stress to my players what Big Jock had preached to me and his Celtic sides over the years.

“If he thought you didn’t come up to scratch, he didn’t waste time on you. He had other priorities and players came and went during his seasons in charge.”

Celtic went on a sequence of wins to set up the adrenalin-pumping climax to the campaign on the fraught afternoon of May 2 1986. Hearts required to avoid defeat against Dundee at Dens Park and the championship was theirs. 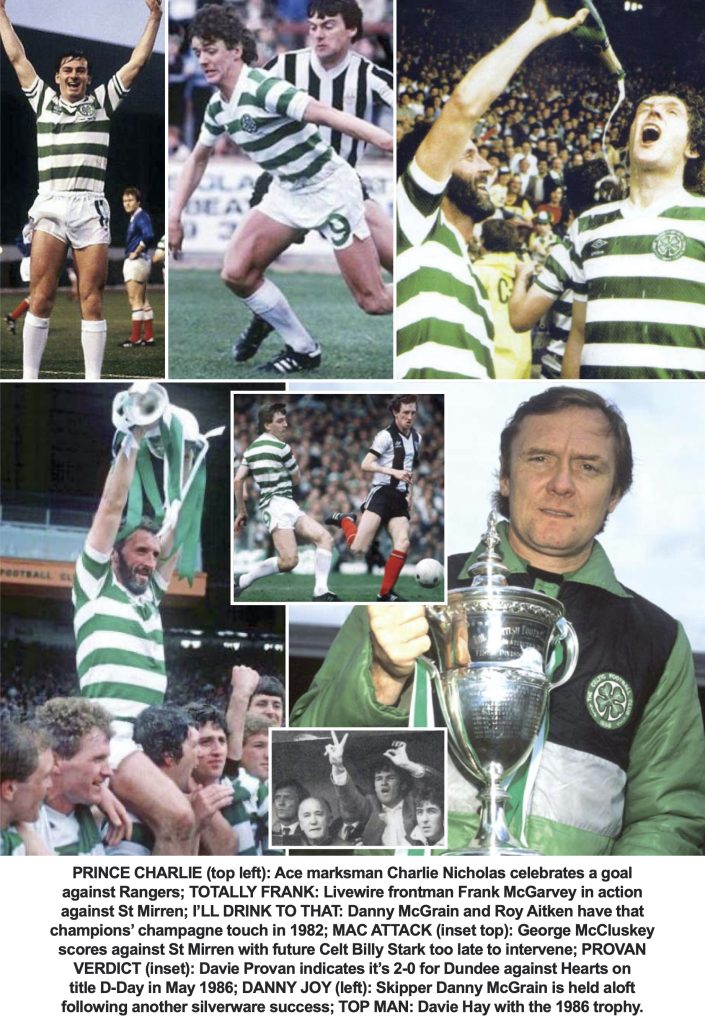 Celtic, playing St Mirren at Love Street on the same day, could do nothing to change the inevitable if Hearts goalkeeper Henry Smith had a shut-out on Tayside.

In ’50 Flags Plus One’, Hay admitted: “Hearts had gone twenty-seven games without defeat. I had to admit it was an awesome sequence of results. Cynics had written us off and that was a huge mistake for anyone to make.

“All the way to the deciding day, however, I had been optimistic about winning the title. I’m not being smart after the event because I was quoted at the time and it’s all there in black and white.

“People may have thought I was trying to get a psychological advantage over the Edinburgh team. Maybe subconsciously I was. But the fact of the matter remained that I genuinely felt we could achieve what a lot of folk were tagging ‘Mission Impossible’.

“Listen, we had won seven consecutive games – four away from home – to set up the grand finale. To simply dismiss us was as insulting as it was stupid. Celtic have never been a support act.”

It’s now in the history books, of course, that Celtic triumphed in a remarkable last-day finale as they walloped St Mirren 5-0 in Paisley and the Tynecastle outfit toppled to Dundee, losing 2-0 to late goals scored by Albert idd, a player who had been at Motherwell during Hay’s short reign as manager at the Fir Park outfit.

The full story of the breathtaking events of the incredible 1985/86 campaign is told with insider knowledge by Alex Gordon, a former sports editor of the best-selling Sunday Mail, and his latest publication is acclaimed by club legend and Lisbon Lion Bertie Auld as “a truly unique tribute to Celtic”.