Celtic Quick News on News Now
You are at:Home»Latest News»‘I’M NOT GOING TO THROW ANYONE UNDER A BUS,’ SAYS DEJECTED LENNY
By CQN Magazine on 28th February 2020 Latest News

Three times his back lot were pierced by FC Copenhagen and that was enough to put the Danes into today’s last-16 ballot on a 4-2 aggregate.

Schoolboy defending from Jozo Simunovic presented the visitors with the crucial opening goal, Tom Rogic gifted possession at the second and Kristoffer Ajer had three attempts to clear at the third, made a mess of all three and veteran frontman Dame N’Doye was allowed to saunter through before firmly sticking a low shot beyond Fraser Forster.

It was a catastrophic night for a dithering defence who were picked off by grateful opponents who took full advantage of everything that came their way.

Lennon saw Odsonne Edouard throw his side a lifeline with a clipped and nonchalant penalty-kick in the 83rd minute, but within two minutes some truly awful positioning saw the champions of Denmark claim a second goal and then book their place in the next stage with a third shortly afterwards.

Apart from a noisy pocket of travelling fans, Celtic Park was stunned into silence. Reminiscent of the Cluj flop in August.

However, the dejected Hoops boss refused to point the finger of blame at any of his under-performing players.

Lennon, speaking to the Daily Record, said: “I’m hugely disappointed because we basically shot ourselves in the foot. We had total control in the first-half, I don’t remember Fraser Forster having much to do. We had all the flow, we hit the post and had crosses going across the goal. 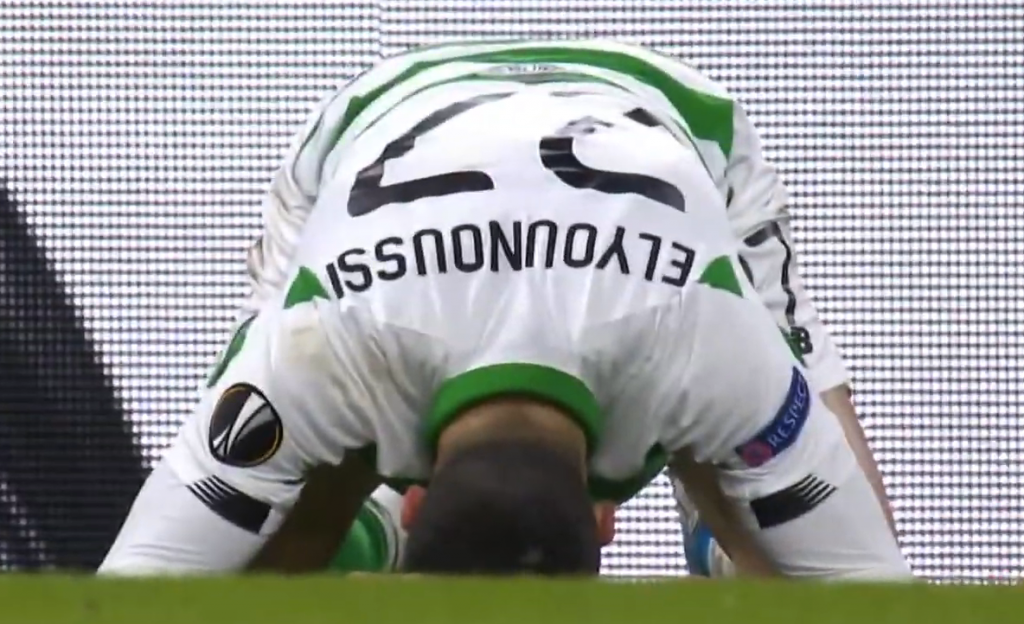 THAT SINKING FEELING…Mohamed Elyounoussi collapses to the turf after a first-half miss.

“At half-time, we were really pleased with the way the game had gone. But we made a mistake at the start of the second-half and gave them oxygen and encouragement. We got back into the game, deservedly so, for all our good play.

“Then we just needed to manage the game and we didn’t do it. We shot ourselves in the foot for the second time and that was the big moment of the tie.

“We had a great opportunity and we let it go. It’s bitterly disappointing to lose in the manner we did because we were the better team for huge parts of the game.

“These players have been absolutely brilliant for me and I’m not going to sit here and criticise them for mistakes they made. They deserved better, but that’s football – it’s cruel sometimes.” 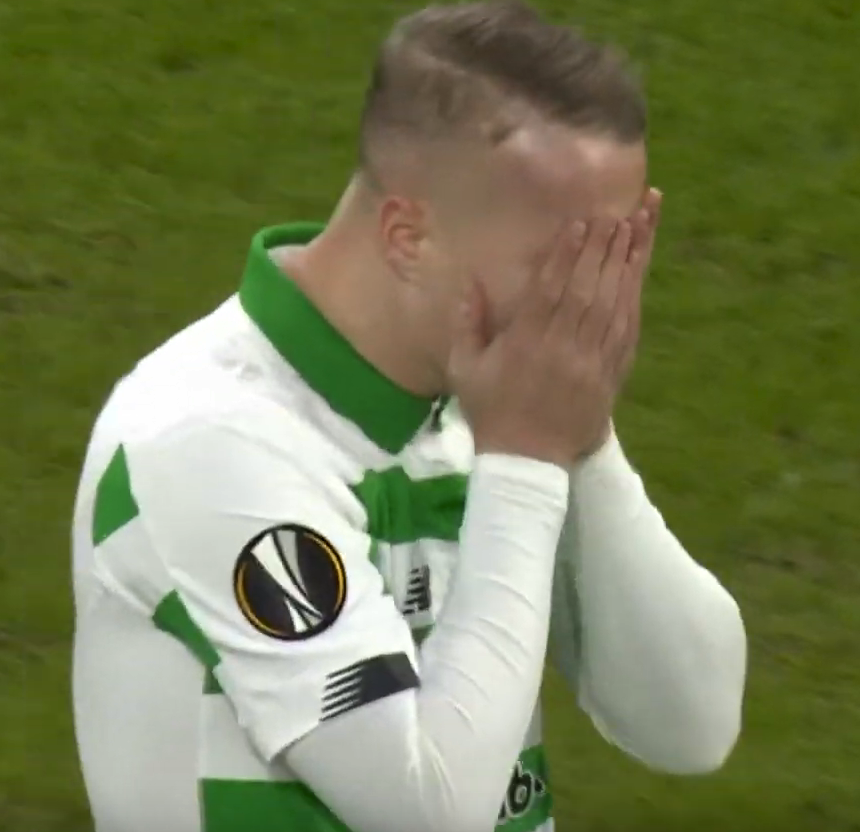 The Hoops went behind six minutes after the interval when some sloppy play from Simunovic, who looked a nervous wreck from that moment on, allowed Michael Santos the opportunity to leave Fraser Forster helpless.

French talisman Edouard, another Celt who wasn’t at his sharpest, lobbed in a cheeky penalty-kick after a VAR-assisted penalty-kick shout following a hand ball from Ragnar Sigurdsson.

However, Tom Rogic made a complete mess of attempting to control a long pass from Christopher Jullien and the Danes broke again for Pep Biel to fire one under the exposed Forster.

It was all over by the time Dame N’Doye tucked the third away and obliterated any hopes of a spectacular – and highly unlikely – late goal spree from the hosts to turn things around.

Lennon added: “They are intelligent boys, they know they have let themselves down a little bit. We’ve had a good Europa League run and I’m really disappointed it has ended. 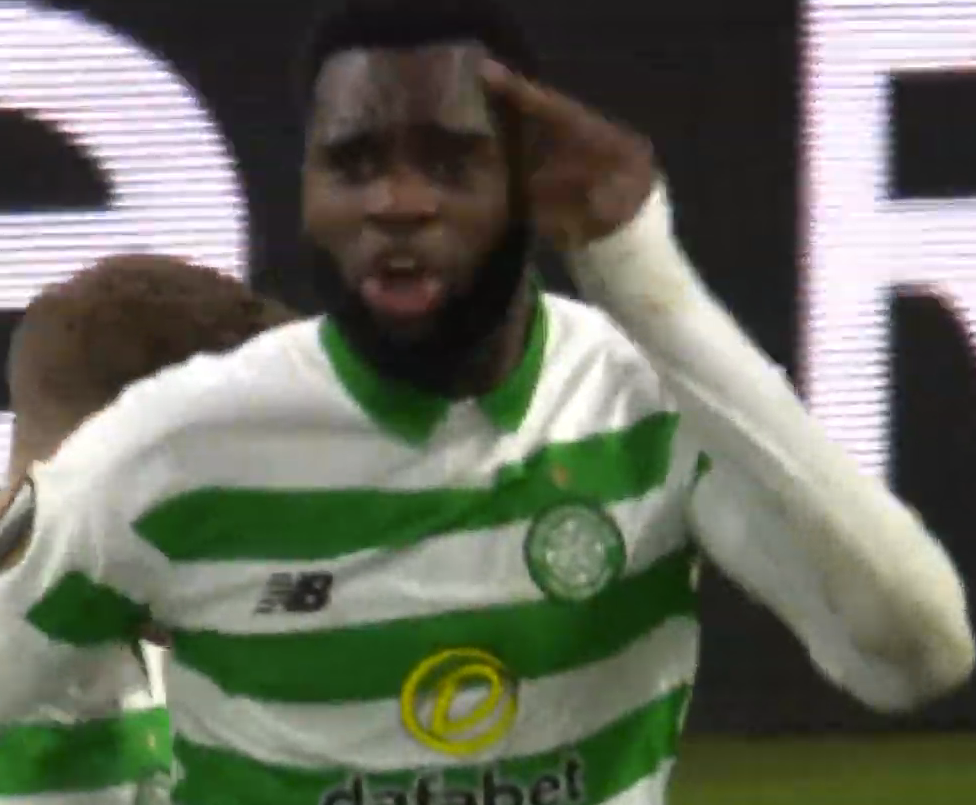 THINK ABOUT IT…Odsonne Edouard has a message to his team-mates after his penalty goal. Alas, they weren’t listening.

“We did all the forcing, Copenhagen didn’t have to work hard for their goals. We gave them away cheaply.

“I’m not going to throw anyone under a bus, we win as a team and lose as a team. I have a really talented bunch of players, but we let ourselves down at key moments in the game.

“I’ve not spoken to Jozo. I have a duty of care to him, he has come back from a long-term injury, Yes, he made a mistake, but we recovered and he didn’t make a mistake for the second goal.

“If I need to pick him up, I will. That’s my job. He has been magnificent for me since I came in the door. He’s made a mistake, He’s held his hands up and we move on.

“The players will be hurting, so will the fans. I don’t really think we need to analyse what went wrong. Everyone knows. It was basic individual mistakes – sometimes you can’t legislate for that.”