CATASTROPHIC defending from Celtic sent them spiralling out of Europe after an error-strewn performance at Parkhead tonight.

Neil Lennon’s men pressed the self-destruct button to send their hopes of a last-16 place into oblivion.

The Danes could hardly believe their good fortune as they were presented with three gift-wrapped goals in front of a stunned 60,000 audience that could barely believe what they were witnessing as blunder followed mistake in a display that rivalled the 4-3 Champions League downfall against Cluj in August.

The game-plan started to fall apart in the 51st minute when Jozo Simunovic miskicked a passback to Fraser Forster while under no immediate pressure.

Michael Santos gleefully raced onto the ball and attempted to pick out Dame N’Doye in the penalty area. Christopher Jullien managed to get in front of the hitman, but his clearance rebounded straight back to Santos who tucked it away.

It was an extraordinary lapse in concentration from dozy Jozo and left the Hoops with an uphill battle.

CHEERS BEFORE TEARS…Odsonne Edouard is congratulated by Callum McGregor and James Forrest.

Astonishingly, they were brought back into the contest when they were awarded a penalty-kick in the 83rd minute which was nonchalantly dinked down the middle of the goal by Odsonne Edouard.

Ragnar Sigurdsson clearly armed away a cross from Edouard from the left and VAR was called into play. There didn’t seem any doubt and the French star stuck it away with some aplomb.

But, unblieveably, just two minutes later, Tom Rogic gifted possession to the Danes when he failed to control a ball out of defence from Jullien. The Danes broke forward and Pep Biel was left with just Foster to beat and he duly stroked the ball under the keeper.

Celtic were lumbered with the impossible task of scoring twice in the fading moments and veteran striker N’Doye, who was 35 last week last week, was allowed to saunter through the middle of the defence, waltz past a weak challenge from Kristoffer Ajer and drill the ball past the helpless Forster who must have wondered if the men in front of him were taking this game seriously.

It was an x-certificate display from Lennon’s side and some of the big-game players such as Callum McGregor and James Forrest just didn’t turn up when they were needed most.

Ironically, the Hoops thought they had claimed the breakthrough goal two minutes before Simunovic’s howler. McGregor fired a loose ball into the net following a right-wing corner-kick, but the ref had blown for a foul on the keeper by Jullien. It was just one of those nights.

It was clear right from the start that the Danes were not in Glasgow to make up the numbers. They were a robust, competitive unit who contested every ball and made life uncomfortable for the home side.

The busy N’Doye, who scored his side’s equaliser last week, was particularly fortunate the Portuguese referee was in a lenient mood as he allowed a series of foul challenges to go without a card being produced.

Poor Ajer was booked for his first foul when he lunged at an opponent following a loose piece of control.

The Hoops took five or so minutes to get into their stride and their first opening arrived in the ninth minute when Mohamed Elyounsoussi drove in determinedly from the left, but his shot was blocked by a desperate Victor Nelsson.

The Norwegian international, making a rare start in 2020, looked in the mood as he created menace wherever he roamed, teaming up well with the eager Greg Taylor, always willing to hurtle down the left wing, and McGregor, looking composed and comfortable as usual in the opening 45 minutes. Unfortunately, he did not carry the same form into the second 45 minutes.

In the 18th minute, the erratic Forrest was remarkably slow to react at the far post following a superb cross from Elyounoussi which flashed across the box. It looked as though all the winger had to do was get a touch, but he anticipated a clearance from an opponent and when he failed to mop up the danger the ball bounced harmlessly wide of the upright.

Four minutes later, Elyounoussi contrived to put the ball over the bar from 12 yards with the goal gaping. The on-loan Southampton star started the move with another energetic run into the danger zone and switched the ball to Rogic.

That created alarm in the Copenhagen defence and a poor clearance went straight to the Hoops raider. Unfortunately, he leaned back at the crucial point of impact and sent the ball spiralling waywardly off target.

Celtic were taking a grip of the game as the half wore on and the Danes were relying on quick breaks with N’Doye and Kaufmann.

Forster was rarely troubled, but there was still a threat when the visitors sprinted forward on the counter-attack.

Little had been seen of Edouard, but in the 42nd minute he had a drive deflected wide of the keeper’s right-hand post. 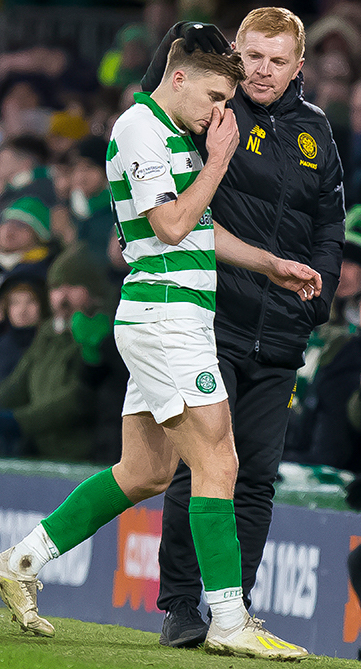 THE END…James Forrest with Neil Lennon.

Three minutes later, Karl-Johan Johnsson, who had been so safe in the Danish capital, made a mess of a high ball and Elyounoussi swiftly fired the ball across goal, but, unfortunately, there were no takers.

The Hoops were well on top and the Danes would have been delighted to hear the half-time whistle.

However, everything fell apart as the champions gifted goals to the Danes after the interval and have no-one but themselves to blame for failing to be in the draw for the last-16 tomorrow.

Leigh Griffiths, who came on for the tiring Elyounoussi in the 70th minute, had an opportunity to level when the Hoops were trailing 1-0, but his right-foot shot was miraculously clawed away by the keeper.

However, clear-cut chances were few and far between on a night where Lennon’s side just could not cope with the counter thrusts from their workmanlike opponents.

When will we ever learn?