Celtic Quick News on News Now
You are at:Home»Latest News»KARAMOKO: ‘IT’S GREAT TO BE BACK’
By CQN Magazine on 13th October 2019 Latest News

KARAMOKO DEMBELE is stepping up his match-fitness and played for the England Under-17s against Germany at the weekend.

The Celtic wonderkid took to Instagram to say: “It’s great to be back for England!”

Unfortunately, the 16-year-old winger didn’t celebrate a win as their opponents clinched a 1-0 victory and Dembele added: “Wasn’t the result we wanted but all focus on Spain.”

The Hoops prospect was in action during the encounter at the Pintar Arena in Spain. On Thursday, the countries were involved in a 3-3 draw where Dembele’s Hoops team-mate, goalkeeper Tobi Oluwayemi, saved a penalty-kick for the English. 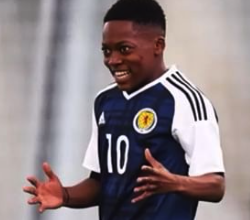 Neil Lennon brought Dembele, who is also qualified to play for Scotland and Nigeria, into his first team plans at the tail-end of last season when he made his first-team debut as a second-half substitute for Oliver Burke in the 2-1 win over Hearts at Parkhead in the last Premiership outing of the campaign.

He was an unused substitute in the 2-1 Scottish Cup Final triumph over the Tynecastle side on May 25 when Celtic sealed the historic treble treble.

Dembele has been hampered by injury this time out, but trained with the first team squad ahead of the Livingston game a week ago today.

He is likely to get a start for the nation of his birth tomorrow when they take on their Spanish counterparts at the same venue.