CHRISTOPHER JULLIEN suffered his first defeat as a Celtic player a week ago today when Livingston stunned the champions 2-0 in West Lothian.

The £7million centre-half – the most expensive defender in the club’s history – struggled along with his team-mates to put on a performance against Gary Holt’s fired-up Livi with towering Aussie striker Lyndon Dykes creating mayhem.

Jullien and Kristoffer Ajer failed to curb the striker’s threat and a bad day got worse when the hitman lobbed in the second killer goal when he raced between the central defensive partnership to lob the ball over Fraser Forster.

It was also the comeback keeper’s first loss since returning to the club on a season-long loan from Southampton.

Completing a treble the Hoops did not want, Boli Bolingoli, who, along with Jullien, missed the 4-3 Champions League exit from Cluj in August, was also sampling the feeling of being second best for the first time since his £3million arrival from Rapid Vienna. 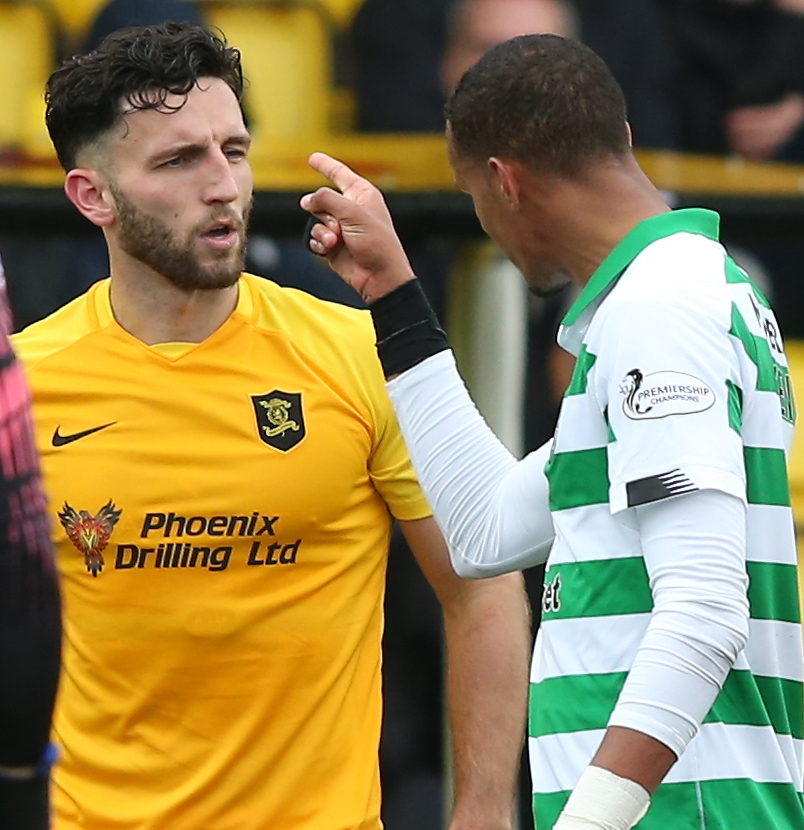 MAKING A POINT…Christopher Jullien is clearly not happy with a Livingston opponent.

Celtic legend Davie Hay – as reported in CQN – had some words of advice for Jullien who allowed himself to be sucked into various altercations with the opposition which interfered with his concentration.

However, the 6ft 7in Frenchman, after particularly good recent displays at Ibrox and Rennes, has vowed to return to winning ways when Ross County visit Parkhead on Saturday – an afternoon when the eight-in-a-row champions can return to top spot.

Jullien said on Twitter: “Eager to get back on the pitch #neverstaydown #daretocreate.”

Celtic have the opportunity to go back to the Premiership pinnacle if they beat the Dingwall outfit with Steven Gerrard’s side, two points ahead at the moment, playing Hearts at Tynecastle 24 hours later.

Jullien is obviously determined not to lose his focus on this occasion.