CELTIC celebrated the 53rd anniversary of their unforgettable European Cup triumph in Lisbon a week ago.

JIMMY JOHNSTONE was always one of my favourite guys. Obviously, he was much, much more than a mere team-mate.

He was great company and I always thoroughly enjoyed our time together, whether it was on a football field, sitting by a loch doing a spot of fishing, taking in a movie, having a quiet drink in a bar, oh, anywhere and everything.

His courage in his gallant battle against motor neurone disease was humbling. I used to pop into his home in Uddingston to say a quick hello almost on a daily basis. His wife Agnes had rigged up a room that was custom-built for the Wee Man.

He had a big comfortable armchair and a massive TV screen that was normally tuned into one of the sports programmes. I would go there to try to cheer up my little chum, but, more often than not, it was he who had me in gales of laughter by the time I got back to my car.

I remember a day Bertie Auld and I arranged to visit him. We were sitting in his room simply shooting the breeze. There were just the three of us as Agnes had taken the opportunity to do a bit of shopping in Glasgow. We were nattering away when the doorbell sounded.

‘Are you expecting anyone, Jinky?’ I asked. ‘Aye, Rod Stewart said he might drop in,’ replied my wee mate, who was one of the best wind-up merchants in the business.

‘I’ll see who it is,’ I said as I made my way to the front door. I opened it and standing there right in front of me was…Rod Stewart.

‘Hiya, Tommy,’ said Rod. ‘How’s it hanging?’ Before I could think of an answer, he said, ‘Is Jinky coming out to play?’ We both fell about laughing. Rod was completely on his own, no minders, no entourage, just a chauffeur who remained in the Bentley which was parked in Jinky’s driveway.

Of course, it didn’t take long for half of Uddingston to turn up on Jinky’s doorstep to get a glimpse of the celebrity Hoops fan. I showed Rod to Jinky’s room and all four of us, three Lisbon Lions and one of the world’s biggest rock stars, were sitting there talking about the good old days. Amazing, really.

One the saddest aspects of Jinky was the fact he could never quite comprehend or take in the fact that he had been allowed to leave Celtic. He was only thirty years old when Big Jock gave him a free transfer. I don’t think he could ever quite accept that he was no longer a Celtic player. 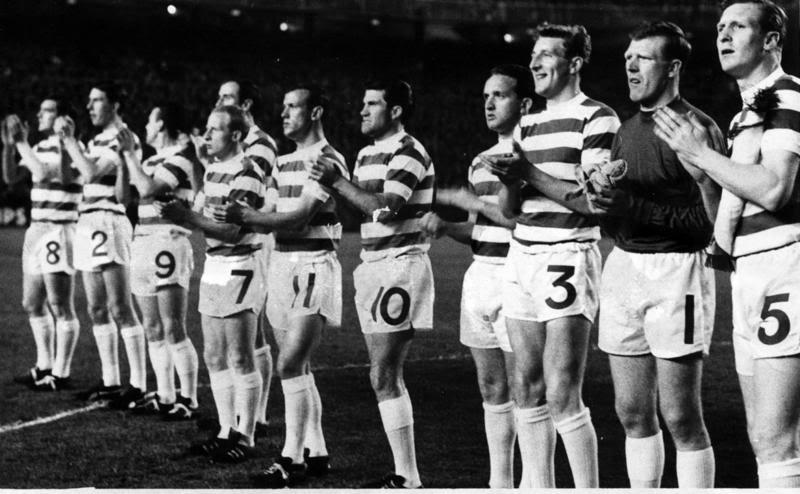 SPANISH SIGHS…Jimmy Johnstone and Tommy Gemmell line up with their Celtic team-mates before the memorable game in Madrid in June 1967.

The club and the fans became his world. He was a true working class hero and the supporters identified with him. He was easily one of the best footballers in the world during his prime. I will never forget his impeccable display against Real Madrid in the Alfredo di Stefano Testimonial Match at a sell-out Bernabeu Stadium, with 130,000 cramming in to say farewell to their legendary striker.

Wee Jinky went onto steal the show after Alfredo, who had been a boyhood idol of his, left the field after fifteen minutes. The forty year old looked as though he could have lasted the entire game, but he decided to take his seat in the stand. And from that vantage point he viewed my mate at his virtuoso best.

That was as near to perfection I have ever witnessed from an individual on a football pitch. I am not saying that out of misplaced sentiment, I really mean it.

That memorable evening was in June 1967 only a week or so after Celtic had won the European Cup. Celtic could have named their price for Jinky after that awesome showing and teams throughout the world would have been queuing up to throw money at the club.

Honestly, that thought haunted him. When he signed for us, Jinky told me, ‘Ye know, TG, Ah cannae play against Celtic. Honestly, Ah’ll no’ play.’ I reminded him Celtic were in the Premier League and we were in the First Division.

‘Aye, but whit if we draw them in the Cup? Whit happens then? Ah’m no’ playing. Pick me if ye want, but Ah’ll no’ turn up. Ah’ll be injured or something. Ah’m no’ playing against Celtic. Ah never will, nae chance.’ The Wee Man meant it, too.

Another thing Jinky found difficulty in understanding was that once he had left Celtic there would be no way back as a player. Big Jock wouldn’t have made the decision lightly to release such a favourite of the support.

And, at thirty, Jinky could still have contributed something, even if it was only coming off the substitutes’ bench late in a game. His mere presence would have lifted the entire place. So, Jock would have thought long and hard before letting him go. I can tell you Jinky, in fact, persisted with the thought that there might have been an opportunity of playing again in those green and white hoops.

Unfortunately, he only lasted three months with us at Dundee. Clearly, his heart wasn’t in it at Dens Park. It seemed it was Celtic or nothing. Jock allowed him to train with the first team and it was like the good old days for my wee pal.

Then Irish club Shelbourne got in touch to see if he would be interested in playing for them. With Jinky in the team, they must have realised they would have sell-out crowds wherever they played. They made him a good offer and Jinky phoned me to relay the news. He actually seemed fairly excited.

‘Tommy, Ah’ve had a word wi’ Jock. Shelbourne have offered me a twelve-month contract, but Big Jock says I should only sign a monthly deal. Do ye think that’s because he might want to sign me and he won’t have to pay a fee?’ 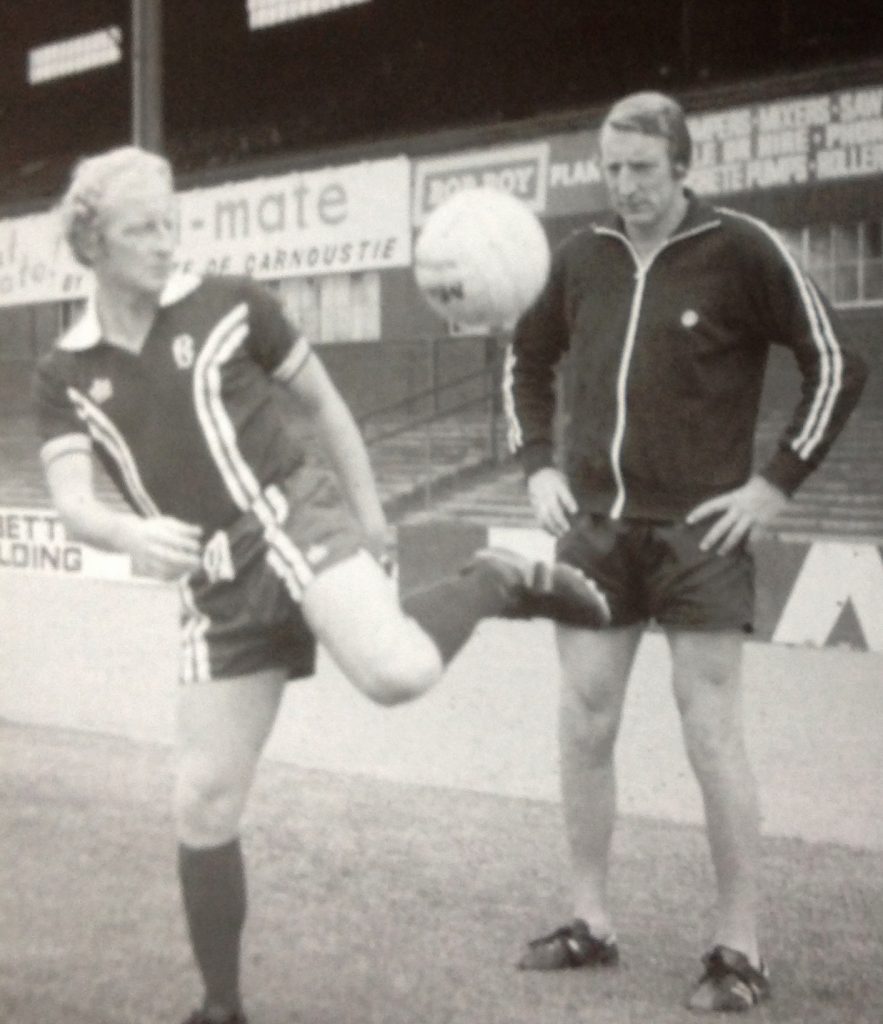 FOR MY NEXT TRICK…Jimmy Johnstone tries to impress his Dundee boss Tommy Gemmell.

I thought for a moment. It did seem highly unlikely, but Big Jock did move in mysterious ways. I couldn’t break Jinky’s heart and tell him what I really thought. I knew my days as a Celtic player were over when Jock had made up his mind. I realised it would have been the same in Jinky’s case. However, I said, ‘You never know, Wee Man. Train hard, get yourself fit, show some of that old magic and anything could happen.’

Deep down, I didn’t believe it, but extraordinary things happened around that wee chap and if anyone could have pulled it off it would have been him.

I wondered if the move to Shelbourne, unlikely though it would have seemed only a couple of years earlier, might just give him the sort of boost he needed. I also knew Jinky had come straight out on one occasion and asked Jock if there was any chance of a return to Celtic.

That must have caught the manager on the back-foot. Jinky confided in me, ‘He said Ah’ve to wait and see, Tommy. He didnae say naw.’

I wanted to believe with all my heart that somehow Jinky could manufacture a comeback to Paradise, but I just couldn’t see it. However, the Wee Man was determined to have one last kick of the ball at Parkhead. Shelbourne agreed to fly him in on the day of the game and fly him straight home again afterwards. He could spend the week with Agnes and the family and train with Celtic.

Jinky would often admit the devil would come out in him when he had too much to drink. Unfortunately, that was true. But he was so determined to attempt to get back to Celtic that he went on the wagon for a couple of months. And, then, in typical Jinky fashion, he decided to end his spell of abstinence in a hotel in a quaint little place called Balybofey on Hogmanay 1977 as Shelbourne prepared for a game against Finn Harps in Donegal the following day.

It had all the makings of a disaster. The script had already been written. Jinky got involved and, sadly, there were reports that he had overdone the celebrations. Possibly he believed 1978 might be the year to signal his emotional return to his first love.

His new club weren’t impressed. His monthly contract wasn’t renewed and he was on his way home after only nine games and two goals during his Emerald Isle adventure. The door was well and truly closed on any remote chance of going back to Celtic.

He phoned me to explain, ‘Ah wisnae even looking for a drink, Big Man. Honest. One of the lads came in with a bottle of Jameson’s Irish Whiskey and he shared it among a few of us. We had a couple of other drinks, but it wisnae a bevvy session.’

I believed him, but Jinky’s idea of a bevvy session and most other people’s do not run along parallel lines. I often thought my wee pal could drink his own body weight in alcohol in one sitting. 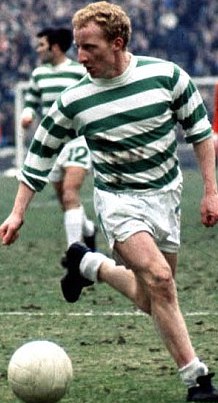 LORD OF THE WING…Jimmy Johnstone in his Celtic heyday.

He would have had a few, that’s for sure, but he would also have been certain he would be fit and ready for the game the following afternoon. In his heyday he could have managed it. He was thirty-three years old now and it was a different ball game. Once everything sunk in, he was forced to concede there was no longer any possibility of him finishing his career at Celtic. Sad, really.

It was obvious Jinky had a drink problem. That’s been fairly well documented. He could go over the score, but, believe me, that wee man had a heart of solid gold.

Bertie Auld told me the story of the pair having a quiet beer in a bar in Uddingston a day or so after Celtic had beaten Blackburn Rovers at Ewood Park on their way to the 2003 UEFA Cup Final. Jinky would hardly have been flush at the time, but he looked through the window and saw a couple of unfortunates sitting in an alleyway across the road.

Jinky immediately ordered six cans of lager and took them over to hand to the two blokes. They probably hadn’t a clue as to the identity of their kind benefactor, but that little cameo was so typical of the man.