Author Alex Gordon, whose fifteenth Celtic book, ’50 Flags Plus One’, is out now, spotlights nearly man John Hughes in an edited extract from the former forward’s autobiography, ‘Yogi Bare: The Life and Times of a Celtic Legend’, which was published in 2014.

“I AM sorry, Yogi, there’s no way you can play. In fact, I don’t think you should even get on the airplane.”

That was the devastating message to powerhouse forward John Hughes who had played in five of Celtic’s European Cup encounters leading to the Lisbon crescendo against Inter Milan in Lisbon.

The club’s seventh-highest goalscorer in history with 189 strikes recalled: “Two simple little sentences, twenty-two words in all, and they left me feeling as though I had been hit by a wrecking ball. The words were delivered in a typical matter-of-fact manner by Celtic club doctor John Fitzimons and, after finally digesting them, I was utterly devastated.

“There was no point in asking Fitz for a second opinion because, deep in my heart, I knew his prognosis was accurate. ‘Sorry, Yogi,’ repeated Fitz and this time there was genuine warmth and feeling in his tone. He left the room as I sat on the treatment table. For a moment, I was left alone with my thoughts. Slowly it dawned on me. I would not be fit for selection for Celtic’s biggest game in their history, the European Cup Final against Inter Milan in Lisbon on May 25 1967.

“My thoughts were in a swirl. How on earth could this happen? A simple kick on the ankle in the Scottish Cup semi-final against Clyde at the start of April and, almost six weeks later, a dream had been obliterated. Don’t get me wrong, I never thought for a second I would be an automatic choice to play against the Italians. With Jock Stein around, you never took anything for granted.

“I had played in the 3-1 triumph over Dukla Prague in the first leg of our semi-final at Parkhead, but that would have meant nothing to Jock. Nor would it have mattered that I had performed in five of the eight ties leading up to Lisbon. So, there was every possibility, even if I had been fully fit, the manager might have gone with the selection that got a goalless draw in Prague to book the historic European spot and then go on and take their deserved place in club folklore. 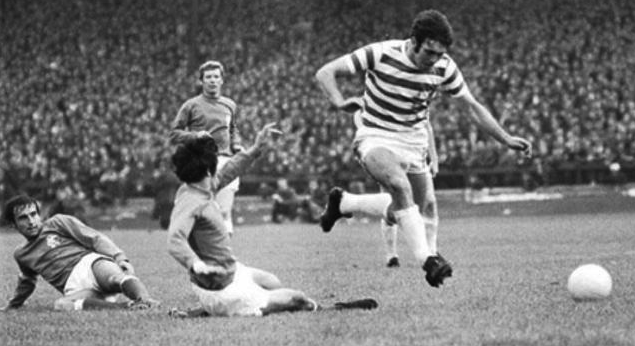 YOGI ON THE RAMPAGE…John Hughes leaves Rangers duo Ronnie McKinnon and Colin Jackson in his slipstream as he heads for goal. Alex MacDonald can only watch.

“So, at long last, I’ve got the opportunity to answer the question I have been asked so many times while dismissing some of the nonsense that has cropped up over the years. First up, the query that has followed me around for decades. ‘How did you feel when Jock Stein dropped you from the team to play Inter Milan in Lisbon?’ I wasn’t dropped. I wasn’t up for selection in the first place. End of story.

“Jock didn’t have to work too hard on that decision. I couldn’t have played even if my life had depended on it. And let’s nail this piece of rubbish. I’ve been asked if I regret owning up to the injury and that I may have been able to disguise it and play while only half-fit.

“Honestly, that is just so stupid. It goes beyond comprehension. Disguise the injury? I could barely walk! And Fitz was so concerned it would flare up in the pressurised atmosphere of an aircraft cabin that his advice was to stay at home. Believe me, that was never going to happen. I would have hobbled all the way to the Portuguese capital to cheer on the team. Remember, I wasn’t just a Celtic player, I was also a Celtic supporter.

“Yes, I admit I felt as though I had been stabbed in the heart when I heard those chilling words from Fitz. And, yes, I felt like an outsider when Celtic conquered Europe. I’m not going to lie about that. I was so desperate to be involved, to be out on that lush pitch at the Nacional Stadium and to be playing my part as my team Celtic became the first British club to be acclaimed as the best in Europe.

“I wanted to be in the side that followed in the wake of legends such as Real Madrid, Benfica and the two Milan clubs, AC and Inter, previous winners of the fabulous silverware, rulers of all they surveyed, masters of the beautiful game. How much would that have meant to a guy from Coatbridge who had to be persuaded to take up football by a primary school teacher?

“Well, in a word, everything. How would it have felt to have been on the pitch when the referee blew his whistle for time-up in Lisbon with the scoreline reading: Celtic 2, Inter Milan 1? It goes beyond description.

“Even today, when the players meet for anniversaries and celebrations of Lisbon, I don’t really feel a part of it. I didn’t play in that game and that, of course, is the difference. Had I been on that pitch, I would still be talking about it. You would need a gag to get me to shut up. But I was in the stand that memorable day when I ached to be out on the field with my pals, playing my part in turning over Inter Milan.

“Of course, I was overjoyed for my team-mates at the end and we whooped it up big-style, but I couldn’t help thinking of what-might-have-been. I suppose that’s only natural.”

Hughes added: “All these years later, I can understand the confusion among the Celtic support about my exclusion from the Lisbon line-up. No-one could blame them. Big Jock ordered a complete clampdown on any news coming out of Celtic Park. There was no way he was going to show his hand to Helenio Herrera. Why should he?

“Jock realised the Inter boss had an encyclopaedic knowledge of the players his team would face in the European Cup pinnacle. If he knew Bertie had played outside-left at Birmingham City in the early sixties, you had to ask what he didn’t know. Jock wanted to keep him guessing. Herrera would have been well aware I could play at centre-forward as well as on either flank. I was an entirely different proposition to Stevie and Wispy coming through the middle.

“Would he consider tinkering with his defence to deal with that sort of threat? It was all very hush-hush, but twelve days before the game in the Portuguese capital I had to accept the nearest I would get to the pitch would be a place in the stand. Yes, it was heartbreaking, especially when well-meaning supporters asked me for my thoughts on the rundown to the game. ‘Stick one in the pokey for me, Big Man,’ they would say. I could only smile and reply, ‘I’ll do my best, mate.’

“And all the time I had to accept I wouldn’t be out there in the thick of the action in the most momentous encounter in Celtic’s history.”