SCOTT ROBERTSON will go straight into the Celtic first-team squad for Saturday’s Premiership encounter against Livingston at Parkhead.

The 19-year-old midfielder has been recalled from his loan stint at League One outfit Gillingham in the wake of the coronavirus fall-out that forced 13 players to self-isolate and miss last night’s 1-1 draw with Hibs in Glasgow.

Neil Lennon and assistant gaffer John Kennedy were also ruled out during the 10-day quarantine after the trip to Dubai last week that ended with Christopher Jullien testing positive for the virus when he returned home on Friday.

First-team coach Gavin Strachan was in charge against the Edinburgh side who snatched a stoppage-time equaliser through Kevin Nisbet after David Turnbull had fired the champions into the lead with a superb free-kick.

Robertson, who had 19 outings for the English club, returned too late to face Jack Ross’ side, but will be in contention for a place against the West Lothian team at the weekend.

The anchorman, who is under contract until June 2023, has made only one appearance for the first team when he turned out in the 2-0 Europa League loss against Cluj in Romania in December 2019 after the Hoops had already qualified as group winners. 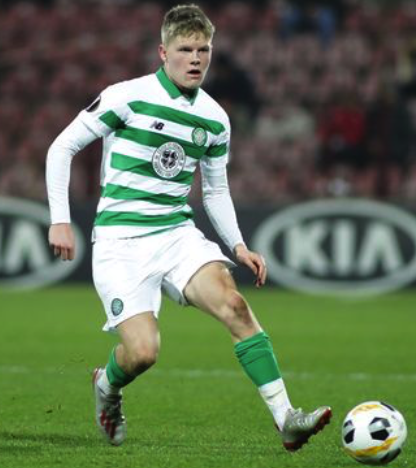 Gillingham boss Steve Evans, speaking to SunSport Online, said: “Celtic sent us a good player and I believe Scott’s going back to Glasgow an even better one.

“He’s been an absolute credit to Celtic and his family and we thank him very much for his professionalism and performances with us.

“I spoke to him at lunchtime to say Celtic were recalling him and he immediately thanked me and everyone else at Gillingham for his period here.

“Scott has gained great experience in League One. It’s a tough division and after a bit of time adjusting he grew in confidence. He has impressed us all.

“I’m very grateful to Neil Lennon and Celtic for agreeing to send the boy down to Gillingham.

“We’ve looked after Scott as best we could and it was important for me that he returned to Scotland with the confidence and belief to kick on with the rest of his career.

“It has been a pleasure for us to play a part in Scott’s development and he has the best wishes of everyone here for the future. I’d be delighted to see him break into the Celtic team.”

Celtic have also recalled goalkeeper Ross Doohan from Ross County and he was on the substitutes’ bench in the deadlock with Hibs while Conor Hazard took the No.1 position.

Vasilas Barkas and Scott Bain are also self-isolating which prompted the action by Lennon to request the return of the youngster from Dingwall.