FRANK McAVENNIE thumped in a double in the 2-1 Scottish Cup Final comeback triumph over Dundee United to bring down the curtain on the fabulous Centernary Year for Celtic in 1988.

The fans’ favourite frontman took the spotlight as Billy McNeill’s players turned the Hampden showpiece on its head against a determined Tannadice outfit.

McAvennie hopes Scott Brown can enjoy a fairytale farewell in the national stadium when this season’s Scottish Cup Final is played on Saturday, May 22.

The inspirational Hoops skipper, who will be 36 in August, is due to quit Parkhead in the summer following a spectacular 14-year career that has already brought in TWENTY-TWO honours.

McAvennie is praying the midfielder can bow out with medal No.23 – and, ideally, lift that piece of silverware against Aberdeen where he has agreed a two-year deal to team up with his former Hibs team-mate Stephen Glass as player/coach.

The iconic striker reckons the holders, going for their fifth successive victory in the trophy, can beat Steven Gerrard’s side the 3pm start at Ibrox on Sunday to go through to the quarter-finals where they will face Clyde or St Johnstone the following weekend. 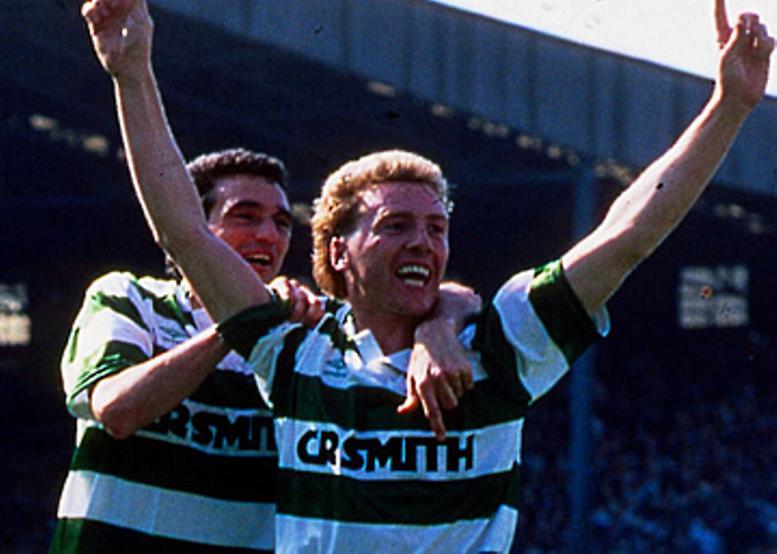 CELEBRATING CENTURIANS…Frank McAvennie and Paul McStay show their joy after the 2-1 Scottish Cup Final triumph in 1988.

Looking at the confrontation in Govan, McAvennie, speaking to the Daily Record, said: “It’s a game Celtic can go and win. That was a strong performance at the weekend, a big performance in the 6-0 win over Livingston.

“Wouldn’t it be great for them to play Aberdeen in the Final? Scott being Scott, he wouldn’t hold back in any tackles in the Cup Final.

“He’s a total professional and I think Celtic supporters will see that next year. They’ll give him a great ovation when he comes to Celtic Park then in the first couple of minutes he’ll upend one of the players and the hatred will start!”

If anyone deserves his place in the sun on Scottish Cup Final day it is surely the resolute Celtic onfield leader who has proved to be such a bargain at the £4.4million Gordon Strachan paid for him from the Easter Road side in 2007.