Today, in Part Four of our fascinating look back at these landmark times in the annals of fame at a momentous football club, we continue as Big Jock kicks off the historic domestic treble in season 1966/67 with a League Cup Final triumph over Rangers at Hampden on Saturday, October 29 1966.

THE goal that won the League Cup – the first trophy in Celtic’s triumphant march towards a historic cean sweep of silverware in season 1966/67 – was so typical of a team under the guidance of Jock Stein.

It was swift, incisive and deadly in its gloriously simple execution. The Parkhead men were defending the League Cup they had won during the previous campaign against the same persistent opponents. On that occasion, John Hughes thumped two first-half penalty-kicks beyond Ibrox keeper Billy Ritchie to secure an edgy 2-1 victory.

Celtic were the bookies’ favourites to complete the double over their lifelong nemesis. The Govan outfit were adamant they would get their revenge and manager Scot Symon insisted his side had improved in the intervening twelve months. A crowd of 94,532 was in place by kick-off on a grey, foreboding October afternoon at Hampden, Scottish football’s ancient football fortress.

Stein looked to his masterful midfield partnership of Bobby Murdoch and Bertie Auld to take control of proceedings while reminding frontline duo Joe McBride and Bobby Lennox of the importance of quick movement and interchanging to unsettle the Rangers central rearguard. Captain Billy McNeill would be up against the erratic George McLean, a rangy centre-forward who flitted effortlessly between wonderful and woeful in the same ninety minutes.

Full-backs Tommy Gemmell, playing on the right, and Willie O’Neill, on the opposite flank, realised they faced a torrid examination of their defensive skills as they were in direct combat with speed merchants Willie Henderson and Willie Johnson.

So, as the mists rolled over the south side of Glasgow, battle lines were drawn by the time 6ft-plus referee Tom ‘Tiny’ Wharton blew his whistle bang on three o’clock to get the latest episode of the continuing and always-intriguing Old Firm adventure underway at the national stadium.

The only goal of a grim, resolute encounter arrived in the eighteenth minute and it must be admitted it was an effort worthy of winning any trophy. The lightning raid on the Rangers barricade was carried out with stealth and pace as Stein’s men struck at the very heart of their opponents’ defensive armour.

Auld, bestowed with the ability to see two moves ahead of the opposition, flighted in a cross to the edge of the penalty area, the ball simply caressed by his left foot. McBride, muscular and brave, outjumped the Ibrox defenders to nod the ball into the path of speedster Lennox.

The player known as Buzzbomb zipped onto the headed pass and, without breaking stride, lashed an unstoppable effort high past the bewildered Norrie Martin into the roof of the net from eight yards. The ball nestled in the rigging before John Greig, Ronnie McKinnon and their defensive cohorts had the chance to blink never mind react. 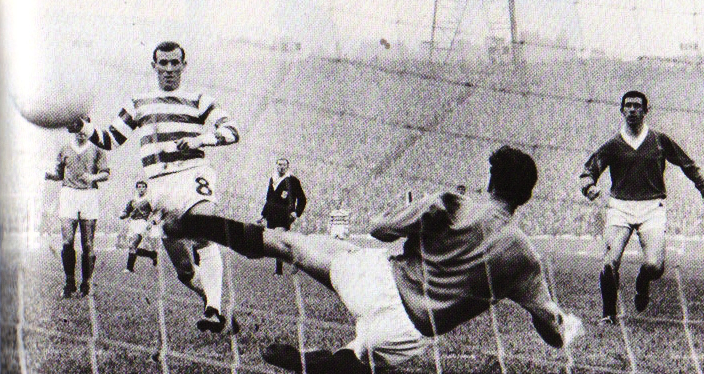 HAMPDEN HERO…Bobby Lennox smashes the ball past keeper Norrie Martin for the League Cup winner as John Greig looks on. 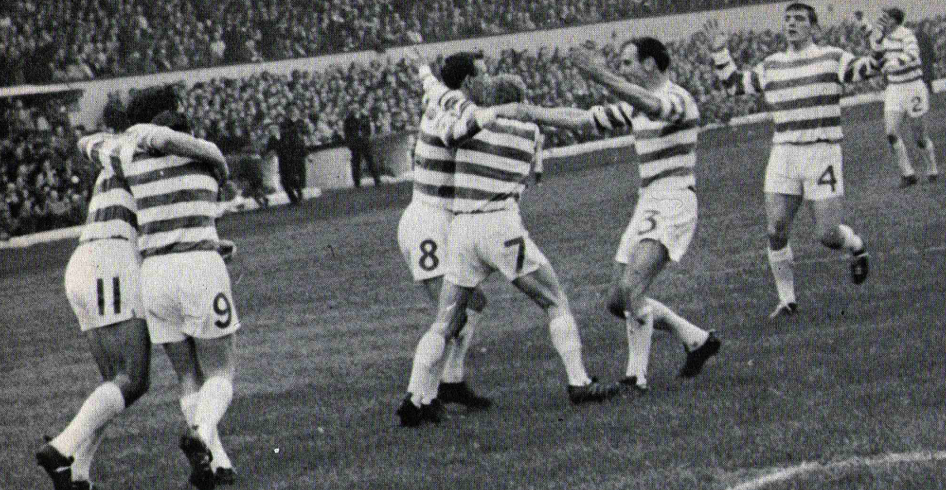 JOY BHOYS…Jimmy Johnstone is first to congratulate Bobby Lennox on his silverware strike.

To be fair, Rangers retaliated with vigour and no little menace. Gemmell and O’Neill had their work cut out trying to stem the raids on the flanks by the tricky and elusive double-act of Henderson and Johnston and McNeill was coping well with the unorthodox qualities of the enigmatic McLean.

Chances were few and far between for both teams, but Celtic survived a scare with only thirteen minutes to go when Alex Smith, a midfielder thrown up front to accompany McLean as the clock ticked down, managed to squeeze the ball under Ronnie Simpson.

The anxious onlookers held their collective breath as his attempt rolled inexorably towards the line. Would it have enough oomph to see it reach the net? Valiant left-back O’Neill didn’t wait for an answer.

He covered the ground quickly to catch the ball as it reached the goal-line and, without any attempt at finesse, hammered the sphere to safety. 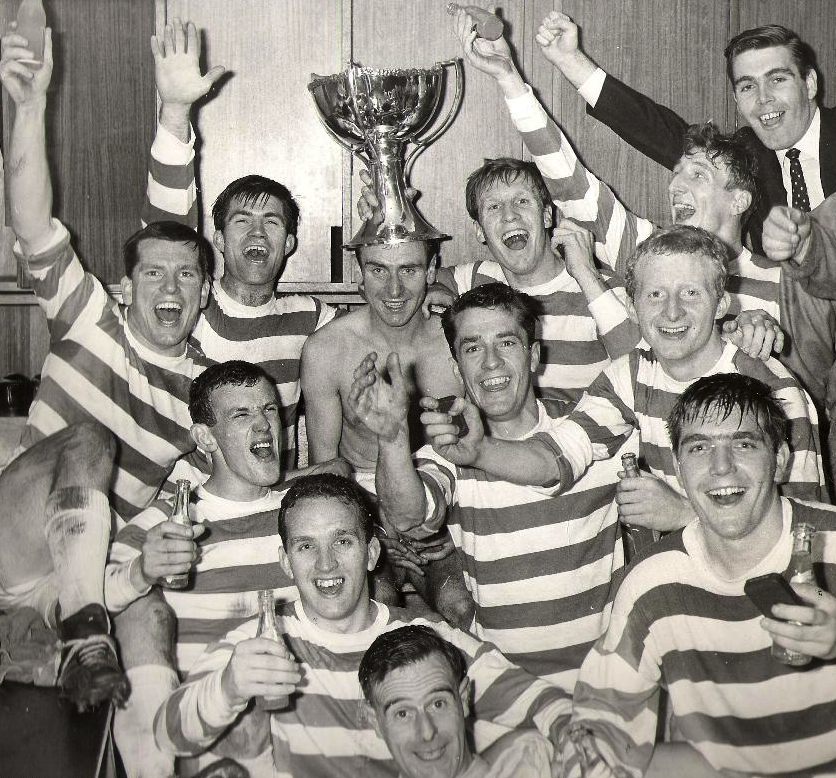 It hadn’t been a spellbinding display by the victors, but elated manager Stein simply stated afterwards: “We came here to win the League Cup and we did that.”

No-one at Parkhead realised it at the time, but this Celtic team were on the verge of a very special season in the club’s history.