Celtic Quick News on News Now
You are at:Home»Latest News»THE PRICE OF LOYALTY: WHY PAUL McSTAY SAID NO TO THE ITALIAN JOB
By CQN Magazine on 22nd October 2021 Latest News

Author Alex Gordon, whose fifteenth Celtic book, ‘Fifty Flags Plus One’ is out now, is a personal friend of the elegant midfielder.

Today, in another CQN EXCLUSIVE, Alex takes a look at Paul McStay and what motivated him to spend his entire glittering playing career at Celtic. 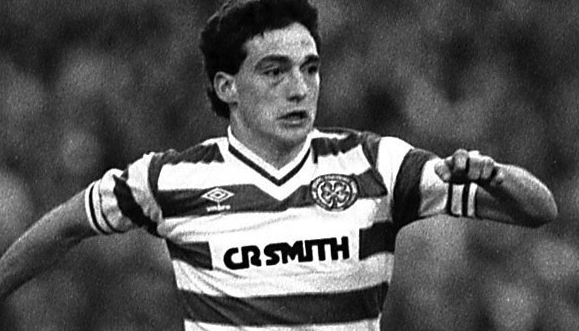 PAUL McSTAY and I sat together on a cold, dank concrete stairwell at Celtic Park and the club’s captain was close to tears.

The team’s inspirational onfield leader was clearly overcome by the sheer emotion of what he had just witnessed. It was the foggy evening of December 12 1995 and Celtic had just played Manchester United in the Testimonial Match for the masterful orchestrator.

The sell-out crowd had long since dispersed after a 3-1 win for the Hoops and I had enjoyed some hospitality at the club’s expense. McStay had arranged to take family and friends on to a nightspot – good, old Victoria’s on Sauchiehall Street – for a late-evening celebration. In the aftermath of the richly-deserved match in his honour, we had a private, undisturbed moment.

I had been asked to put together the matchday programme and I was more than delighted to comply for one of my favourite guys, never mind the fact he was the club’s most influential player over so many years. 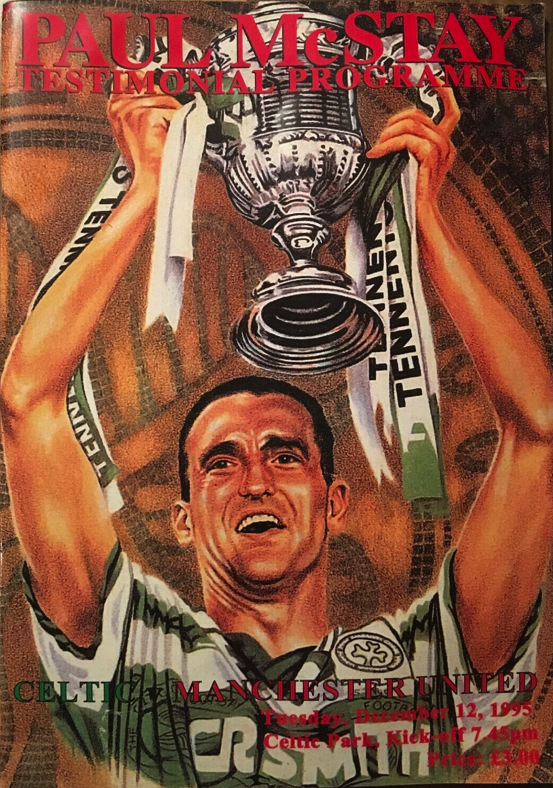 Of course, it had been difficult for him during the barren years. At the peak of his powers, he had to accept Celtic failing to match the reckless spending of their main rivals across Glasgow while, at the same time, Alex Ferguson’s Aberdeen and Jim McLean’s Dundee United were two of Europe’s best-run, fiercely-competitive  and most redoubtable clubs.

McStay had to accept second-best on too many occasions, but he buckled down to the challenges of being the captain of the club infested with boardroom squabbles and infighting that would only be sorted with the arrival of Fergus McCann in 1994.

For me, Paul McStay and Billy McNeill are two of Celtic’s most magnificent and significant one-club servants. Big-money Spurs pursued the legendary Lisbon Lion in the early sixties, but he remained loyal to the east end of Glasgow club he had supported as a boy and used to sneak out of the family home with his green-and-white scarf tucked up his jumper because his parents frowned on him wearing colours while going to watch the team. A small deception from an exceptional human being which surely would have been forgiven if he had been rumbled.

McStay, with a family legacy to follow at the club, also had offers and at one stage, at the completion of the 1991/92 season, it looked as though he could be prised away from the club closest to his heart. He never had to indulge in the badge-kissing routine to emphasise how much it meant to wear that shirt.

Back then, I was sports editor at the Sunday Mail, Scotland’s biggest-selling newspaper at one million copies per week, when the last game of that campaign had been played. On May May 2, Celtic brought down the curtain on another forgettable term with a 2-1 loss to Hibs at Parkhead and McStay raced to the far touchline to throw his shirt into the crowd. 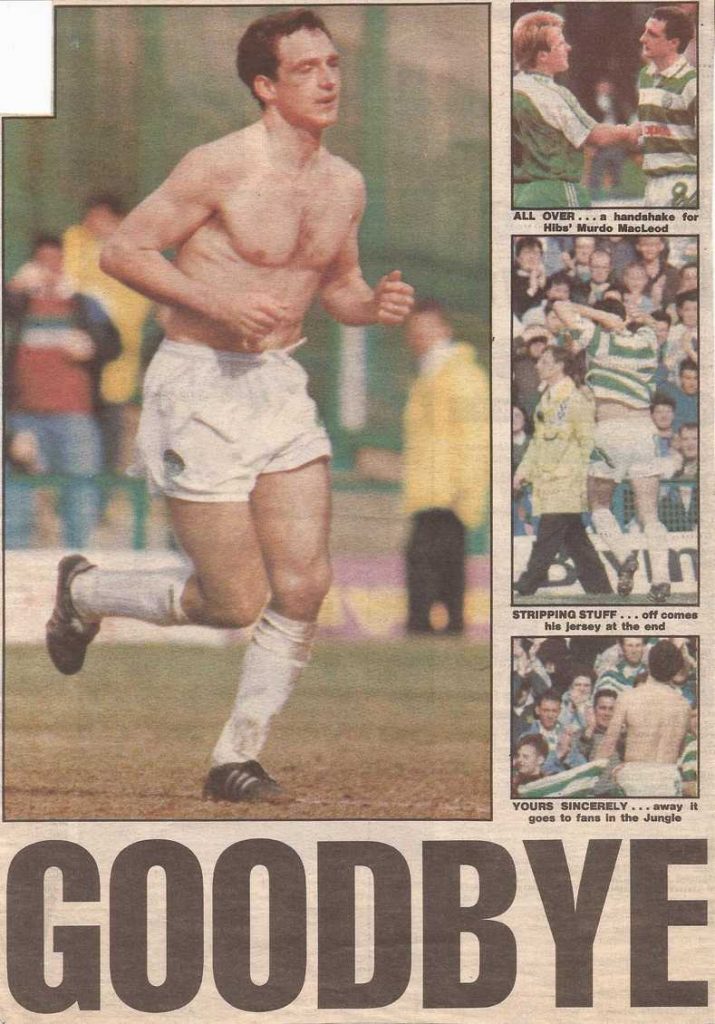 SUNDAY MAIL, MAY 3 1992…and the headline that covered both contingencies.

It had been an unusual gesture from the Scotland international who was coming out of contract and had been linked with all sorts of clubs dotted around Europe. What could be read into his impromptu actions?

I wrote the headline ‘GOODBYE‘ and splashed it across the back page. To be honest, I didn’t know if Paul was staying or going in the summer. The word fitted both scenarios, as far as I was concerned.

It covered the finale of the season and it had been a nice farewell gift for a supporter from the captain. Or it could have signified his last game for the club.

As well all know, McStay signed a new contract with Celtic following three impressive performances for Scotland during the Euro Championship Finals in Sweden.

I arranged the exclusive story for the Sunday Mail and it was always good to scoop your rivals. I know one newspaper had been willing to offer a four-figure fee for Paul’s story, but, keeping his promise, he gave the story to me.

Keeping his word was something that became a trademark of the player ever since his goalscoring league debut for the club in a 3-1 win over Aberdeen at Pittodrie on January 30 1982 until his last kick against Raith Rovers in a 1-1 draw at Stark’s Park on April 5 1997. An ankle injury effectively ended his career at the age of 32.

However, in the summer of 1992, he was one of the most sought-after players in football and I can reveal there was an offer on the table from a Serie A outfit that dwarfed anything Celtic could put together. 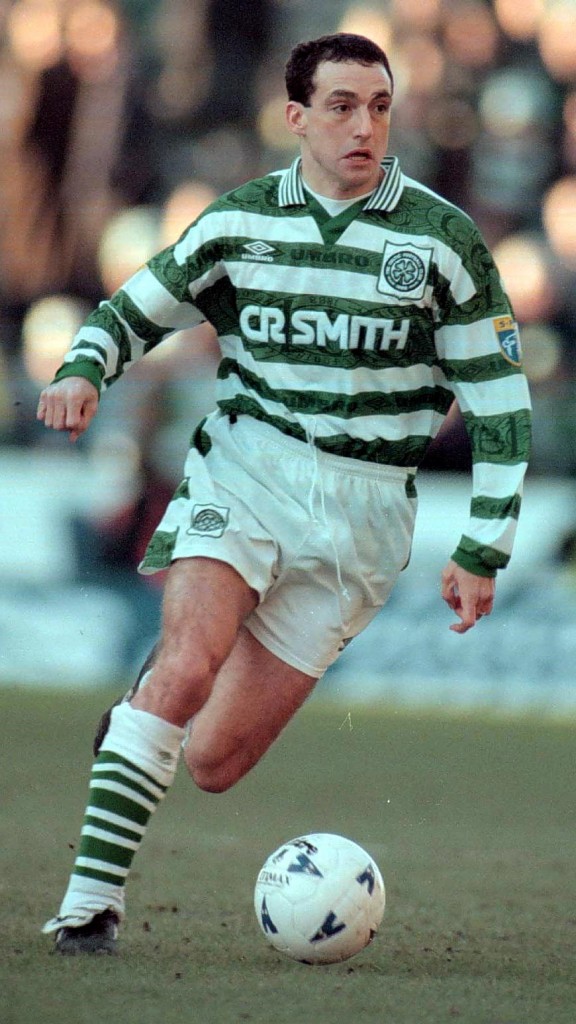 McStay may have been tempted – for a moment, anyway – but he decided he couldn’t leave Celtic and signed a deal that would keep him at Parkhead for life.

Liam Brady was manager at the time and he told me: “Celtic have just signed a £2million player.” That was a lot of money in those days.

Back on the freezing stairwell at Celtic Park on a brutal winter’s evening in 1995, McStay knew once and for all what he meant to the Celtic support. They had turned out on a murky night, with visibility practically zero, to salute a passionate player who had meant so much to them.

And the Celtic captain sat on his own for a moment of contemplation. I felt as though I was intruding when I joined him. He appeared to realise exactly what had just occurred that evening.

That is the acclaim that is afforded loyalty. Billy McNeill received the same accolades.

Others, who chase the bigger bucks, will never know those emotions.

Happy 57th birthday, Maestro, and thanks for the memories.