Celtic Quick News on News Now
You are at:Home»Exclusive Series»THE SPIRIT OF 67: ROAD TO LISBON v DUKLA PRAGUE
By CQN Magazine on 8th May 2020 Exclusive Series
CQN continue our EXCLUSIVE extracts from Alex Gordon’s tribute book, ‘The Lisbon Lions: The 40th Anniversary’, with the spotlight on the dramatic European Cup semi-final confrontations with the Czechoslovakian champions Dukla Prague.
Here is the latest momentous episode on that never-to-be-forgotten journey to the Portuguese capital and the ultimate triumph on May 25 1967.
***

CELTIC 3 DUKLA PRAGUE 1
THIS was the night Celtic really began to believe they could become only the fifth team in history to win the European Cup.
It had seemed a dream to far, an achievement out of reach. Could they emulate Real Madrid (6), Benfica (2), Inter Milan (2) and AC Milan (1) and conquer the playing fields of Europe? Was there the merest possibility that Jock Stein’s men could become Europe’s masters?
The evening of April 12 in a frostbitten east end of Glasgow was to prove eventful as Celtic nudged ever closer to their destiny. They were up against an experienced and highly-rated Czechoslovakian side who had some world-class performers in their line-up, not least their captain and playmaker Josef Masopust.
Something – or someone – triggered Celtic that night. Willie Wallace had to sit out the previous round because he had not been signed in time to face Vojvodina.
He was in the mood to make up for lost time and didn’t it show as he put in a shift that wore down the rugged Czech rearguard.

JINKING JINKY…wee Jimmy Johnstone lifts the ball over Dukla Prague keeper Ivo Viktor for the opener.
He scored two, could have had two more and was a menace throughout the 90 minutes. The twin giants in the heart of the Czech defence were run ragged by Wallace, bought the previous December from Hearts for a snip at £35,000.
The game started with a fair bit of controversy when Stevie Chalmers had a goal disallowed. Tommy Gemmell flighted an inviting ball downfield, Wallace got a touch to Chalmers, he slipped it to Jimmy Johnstone coming in from the right and the little winger chipped it back for Chalmers to nod in at the nearpost. The referee ruled Johnstone’s foot was high in the lead-up play and cancelled the effort.
Johnstone got revenge in the 28th minute when he got one that did stand. It was a goal that started with a Ronnie Simpson kick-out and ended in the back of the Dukla net.
The keeper launched one down the middle, Chalmers got a flick and it fell for Bertie Auld who teed it up for Wallace. His shot deflected off a defender into the path of Johnstone and he gleefully lifted it over the head of the outrushing Viktor.
But that was wiped out right on the strole of half-time when the Celtic central defence got into a real muddle on their own 18-yard line. Stanislav Strunc, a beanpole striker who always looked menacing, pounced and stroked the ball away from Simpson. Parkhead fell silent. A nervous half-time period ensued until Billy McNeill led out his troops for the second-half. 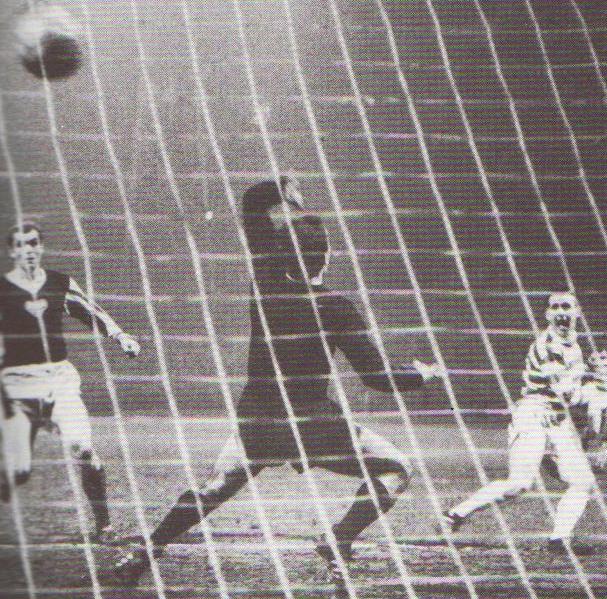 IN WITH A SHOUT…Willie Wallace clips the ball over Ivo Viktor for the second goal.
Just before the hour mark, Gemmell thumped the ball forward and Wallace was running free of the Czech defence to get a wonderful touch off the outside of his right boot to send the ball soaring into the net for the second goal.
In the 65th minute a desperate Dukla player clawed away a cross from Bobby Murdoch with his hand. Free-kick!  Up popped Bertie Auld, dithered a bit to unsettle the defensive wall and then touched it sideways to Wallace who rattled a screamer into the net.
Dukla were there for the taking and Celtic went for more. Chalmers slashed one past the post, Wallace hit one just wide and Murdoch sent a left-foot sizzler just over the crossbar. Wallace even knocked one against the face of the bar from a Chalmers cross and Celtic had to be content with a 3-1 first leg win.
Jock Stein had asked for a two-goal advantage. His team responded.
Team: Simpson; Craig and Gemmell; Murdoch, McNeill and Clark; Johnstone, Wallace, Chalmers, Auld and Hughes.
Second leg, April 25
DUKLA PRAGUE 0, CELTIC 0 (Agg:1-3)
STEVE CHALMERS was the Celtic hero as they cemented their place in the European Cup Final. He was asked to play a lone role up front and the striker didn’t shirk the challenge.
His lung-bursting performance that afternoon at the Jaliska Stadium is the stuff of which heroes are made. It was unlike Jock Stein, and he vowed never to repeat his tactics, but he put out a defensive formation to frustrate the Czechs. It worked, but it could have backfired if Ronnie Simpson hadn’t been alert in the early minutes of the match. 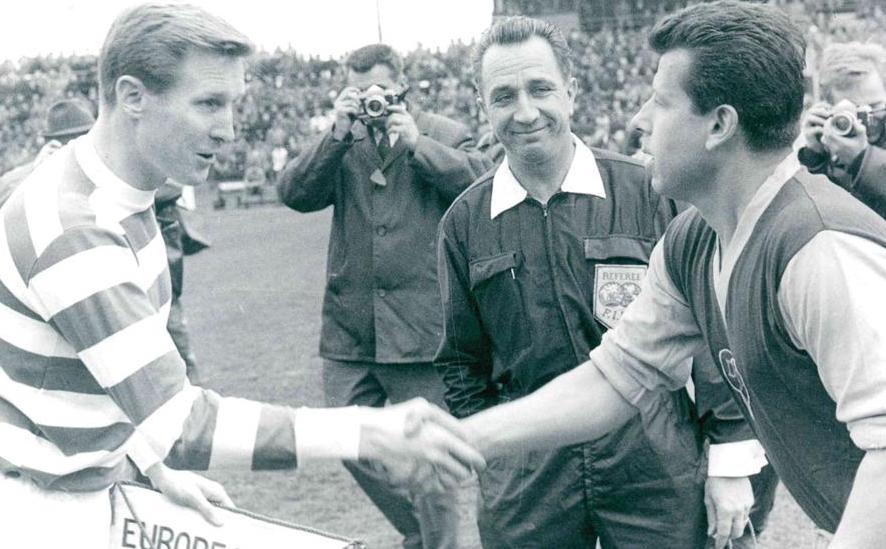 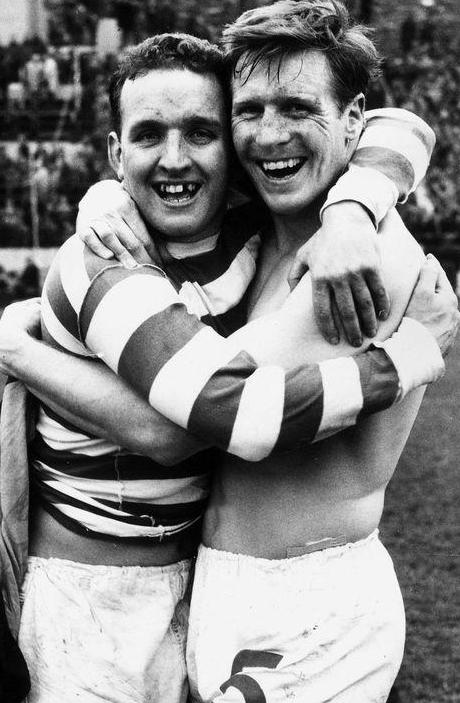 AFTER THE FINAL WHISTLE…Billy McNeill and John Clark celebrate the goalless stalemate.
Strunc had a shot blocked and it dropped in front of Josef Nedorost about 10 yards from goal. He first-timed a vicious volley goalwards and had to step back in horror as Simpson took off to his left to touch the ball over the bar. It was the closest Dukla came to a goal that day.
Celtic, with Billy McNeill in commanding form, soaked up everything the Czechs could throw at them while Chalmers raced around chasing everything that dropped in Dukla’s half.
McNeill recalled: “What a game Stevie had in Prague. We felt a bit sorry for him. At one stage he got into a bit of bother and suddenly he was surrounded by about four of their players. We were too far away to lend him some support. Thankfully, the referee sorted it out.”
Next stop Lisbon!
Team: Simpson; Craig and Gemmell; Murdoch, McNeill and Clark; Johnstone, Wallace, Chalmers, Auld and Lennox.
TOMORROW: The Spirit of 67: The Road to Lisbon: Inter Milan.

Unfortunately, production of the tome, which thoroughly examines the half-century of seasons in which the Parkhead men were crowned Scotland champions, came to an unfortunate halt due to the coronavirus pandemic lockdown.