Celtic Quick News on News Now
You are at:Home»Latest News»TREBLE TREBLE CELTIC AND A DATE WITH DESTINY
By CQN Magazine on 25th May 2022 Latest News

CELTIC clinched the phenomenal treble treble on the iconic date of May 25 at Hampden in 2019 with a 2-1 comeback triumph over Hearts to lift the Scottish Cup.

It was a dramatic conclusion to a campaign that had seen Brendan Rodgers sensationally quit the champions in February in a hasty move to Leicester City.

Neil Lennon, who had quit Hibs the previous month, answered the SOS to return to his old club in a caretaker capacity until the conclusion of the season.

The Irishman, who had left the club in 2014 after winning back-to-back championships, mastermined a 2-0 quarter-final win over his ex-Edinburgh club at Easter Road to set up a semi-final meeting with Aberdeen that saw them ease to a 3-0 victory to make sure of a May 25 crunch occasion with Craig Levein’s Tynecastle side.

READ ALL ABOUT IT…Alex Gordon’s tribute publication, ’50 Flags Plus One’.

Author Alex Gordon recalls the day the club completed that extraordinary treble treble in his fifteenth Celtic book, ’50 Flags Plus One’, when the club yet again did the seemingly impossible.

After clinching the eighth successive crown – and the fourth under the auspices of Lennon – with a 3-0 victory over Aberdeen at Pittodrie all eyes turned to Hampden in the season’s grand finale.

Alex, a former sports editor of the best-selling Sunday Mail, wrote: “The memorable date of May 25 2019 – the fifty-second anniversary of the European Cup victory – arrived and with it the alluring promise of the club’s unprecedented ninth consecutive trophy in domestic competition.

“A feat many shrewd football judges would have hitherto insisted was an impossibility.

“Mistakes can be rectified over the marathon that is the league programme, but one freak bounce of the ball or an individual error or a dubious refereeing decision will often lead to oblivion in knock-out competitions.

“Odsonne Edouard had already made Celtic history as the club’s most expensive player at £9million, so it was somehow appropriate the French personality was the man who delivered even more to the club’s extraordinary folklore in the 2-1 win over Hearts as the curtain came down on a tumultuous, mercurial and, ultimately, satisfying and successful campaign.” 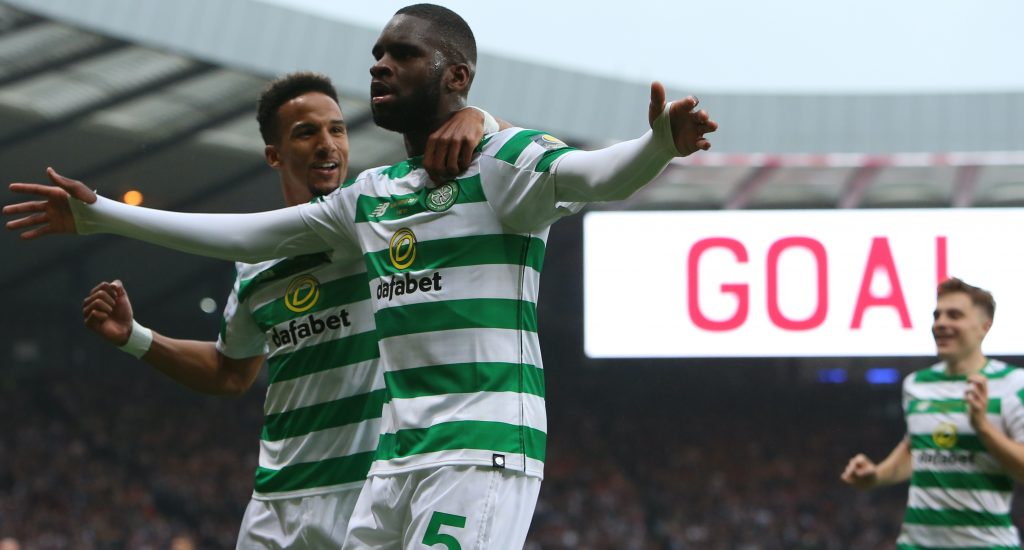 MAKE MINE A TREBLE TREBLE…Odsonne Edouard is congratulated by Scott Sinclair after netting the winning goal against Hearts. James Forrest is about to join the festivities.

FOOTNOTE: It was somewhat ironic that Hearts again provided the opposition as Celtic again made history on December 20 2020. On this occasion, of course, the Parkhead side claimed a truly remarkable quadruple treble in a nerve-shredding extra-time confrontation that ended 3-3 after extra-time.

Rookie keeper Conor Hazard was the hero of the day with two saves in the penalty-kick shoot-out while Kristoffer Ajer blasted in the decisive strike past his former team-mate Craig Gordon. That brought the club their TWELFTH consecutive domestic honour – a sequence of success that will surely never be equalled.