CELTIC will receive £600,000 in compensation for Ben Doak after the 16-year-old winger joined Liverpool.

The Dalry-born talent opted for Anfield due to manager Jurgen Klopp’s track record of developing youngsters such as Trent Alexander-Arnold and Curtis Jones, according to a report in the Daily Mail.

Doak, who had made two sub appearances for Ange Postecoglou since the turn of the year, had not signed a professional contract at Parkhead before being lured across the border.

RARING TO GO…Ben Doak warms up before the 2-1 win over Hearts at Tynecastle in January.

Leeds United were also interested in the teen ace, but once Klopp stepped up the interest over the past fortnight there was only one destination for the player whose first top-team outing for the Hoops came in the 1-0 home league win over Dundee United in January when he came on in the 66th minute for Anthony Ralston.

He also had a late outing in the 3-0 romp against Giovanni van Bronckhorst’s Ibrox outfit in the derby in February.

Postecoglou was keen to keep the emerging talent in Glasgow, but lucrative terms and the chance to work with the Champions League-winning German coach swayed Doak. 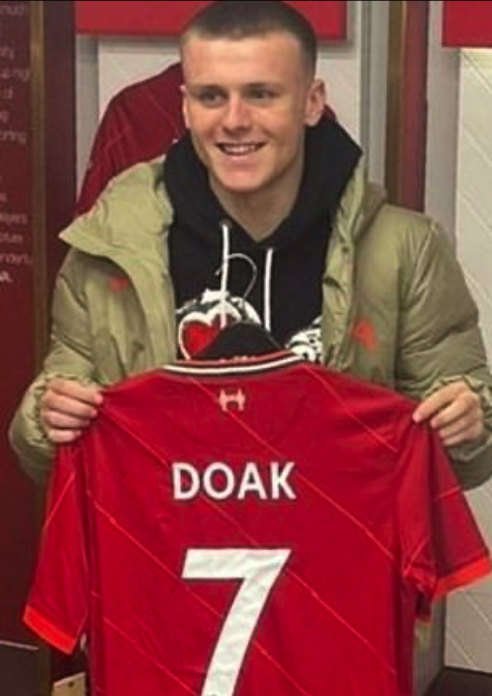 WELCOME TO ANFIELD…Ben Doak with a Liverpool shirt.

The big win earned Scotland qualification for the European Championships and Doak later posted a picture of himself holding the match ball and waving three fingers.

He wrote: “Good to qualify for finals in Israel. International hat-trick.”