Celtic Quick News on News Now
You are at:Home»Latest News»BERNABEI AND THE MARADONA MAGIC
By CQN Magazine on 1st July 2022 Latest News

The 21-year-old left-back completed his £3.75million five-year switch to the champions from top-flight Lanus, as CQN reported yesterday.

His former club then published an image of a young Bernabei pictured alongside the country’s 1998 World Cup-winning captain who died in November 2020 at the age of 60.

The latest Ange Postecoglou recruit said: “First of all, Diego was a world champion. 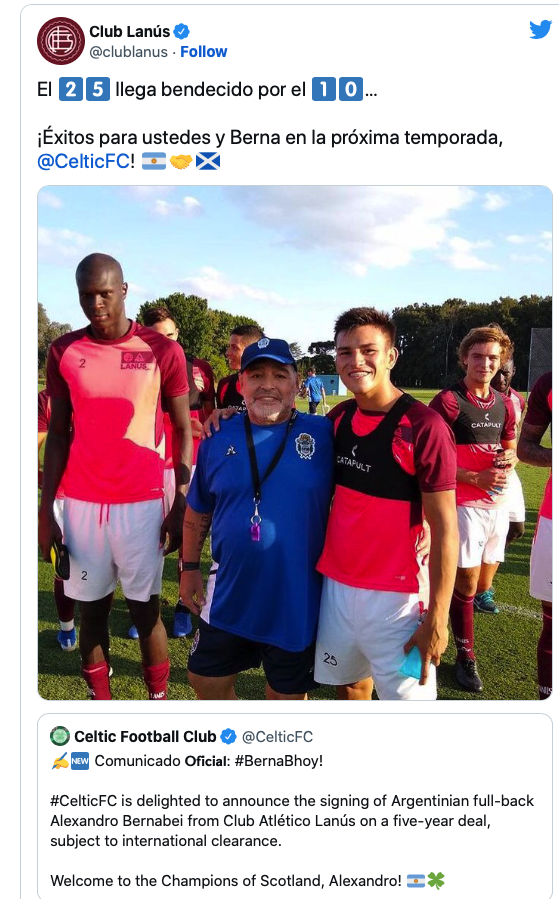 DIEGO MARADONA AND ME…Alexandro Bernabei with the Argentinian icon.

“I had a chance to meet him when there was a friendly between Lanus and Gimnasia.

“For me, it was just really, really meaningful to be able to meet him. For my career and also for my life, for all Argentinians.”

Asked if he was proud to follow the likes of Maradona and Lionel Messi to Europe, Bernabei, speaking to the Scottish Sun, replied: “I wouldn’t make that comparison.

“I don’t think I’m at the stature of the best, like Messi and Maradona. 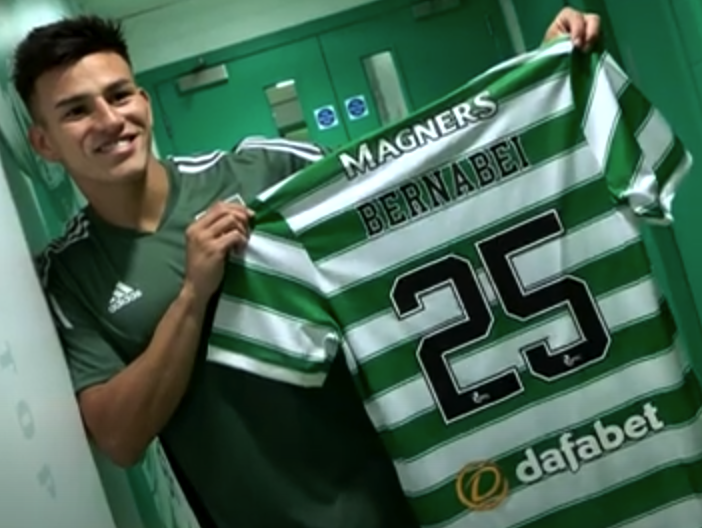 HOOP HOOP HOORAY…Alexandro Bernabei with his new No.25 Celtic shirt.

“Being the first Argentinian at Celtic means I would like to open the door for a lot more Argentinian players to come to the club.

“My family and my friends will all know about Celtic.”

Bernabei continued: “The first thought I had when I heard about interest was that I was very hopeful it was something that would come to fruition.

“I was really looking forward to playing for Celtic. I didn’t need to speak to anyone.

“I think the Champions League is one of the most important competitions in the world. And I’m going to give it all for Celtic.”

The attack-minded defender added: “First of all, I would like to become champion of Celtic.

“After that, I want to enjoy all the years that I have at the club. It was a dream of mine to come and play in Europe. 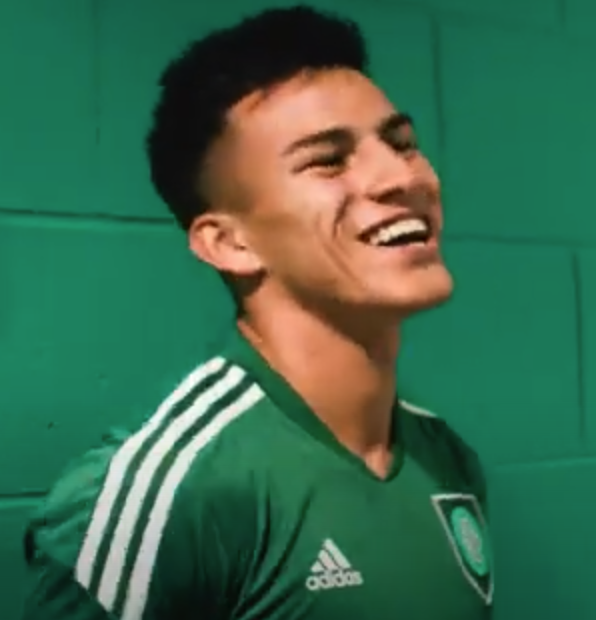 JOY BHOY…Alexandro Bernabei is delighted to be at Celtic.

“It’s happened that I come to a big club, a huge club like Celtic. I didn’t think twice. Family and friends was not an issue.

“I think the Celtic fans are going to see a player who is aggressive, who has a lot of personality, who always gives his best for the team and will defend the Celtic players.

“I spoke to the manager and he made me feel very comfortable.

“I am very grateful to him and the club. I’m going to learn a lot and grow as a player.”

Bernabei has been brought in to add competition to Scotland international Greg Taylor in the No.3 position.

Postecoglou has allowed two left-sided defenders in Liam Scales and Adam Montgomery to go out on loan in the past couple of week.

The Republic Ireland star, who arrived in £600,000 switch from Shamrock Rovers last summer, has agreed a season-long move to Aberdeen while the young Scot, who spent the second half of last term at Pittodrie, has joined St Johnstone in a six-month deal.