CQN continues our tribute to Celtic legend Billy McNeill who passed away a year and a day ago today at the age of 79.

Today former striker FRank McAvennie shares his memories.
BILLY McNEILL fined me enough cash to wipe out the national debt back in the late eighties. Well, that’s if you believe all you hear and read.

Yes, I’ll hold my hands up and admit I was late for training most Mondays following ‘difficulties’ getting home after a weekend in London. This happened only about four times a month. Honest!

It was never quite as bad as that. Big Billy would pull me aside and say something along the lines of, ‘Okay, what’s the excuse this time, Macca?’

I didn’t even attempt to lie to him. It was fairly well documented I liked a party. ‘Ach, you know how it is, Boss,’ I would shrug and say lamely. 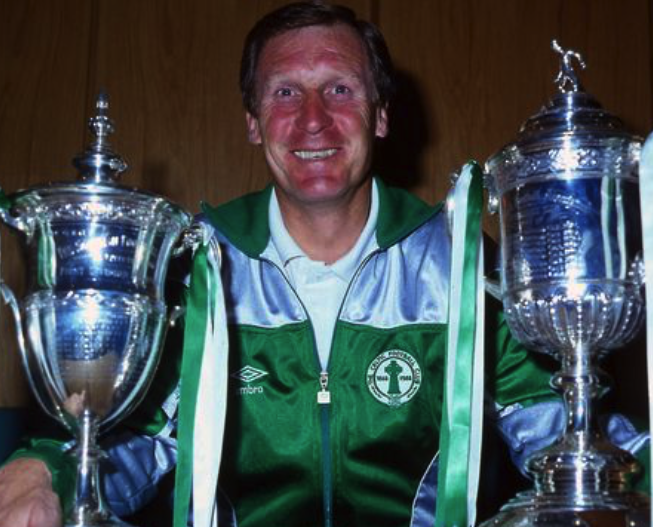 ‘Do I?’ he would look quizzically at me. Then it would be followed with the inevitable remark, ‘Okay, that’s a grand out of your wages’.

People on the outside must have thought I was playing for my boyhood idols Celtic for virtually nothing as the fines mounted up. Not quite. I loved the club and the wonderful support, but I couldn’t quite afford to go about my business with zilch coming into my bank account. Have you any idea how much they were charging for a bottle of champers in Stringfellows back then?

Actually, Billy and I had a wee arrangement that saved me a few bob. As that week’s game approached, the Boss would have a quiet word in my ear. ‘Hey, Macca,’ he would whisper, ‘play well and I’ll forget about docking your wages. Okay?’

How could I say no? It was an unusual incentive, that’s for sure, but anyone who knows me – or who has played alongside or against me – will tell you that once I got on that pitch I always gave 100 per cent. That’s just the way I was.

In any case, I knew my dad Bernard would be somewhere in the Celtic crowd and if he thought I wasn’t pulling my weight he would give me pelters. So, money was the least of my concerns when I pulled on that green and white shirt.

Billy McNeill was great with me from day one, let’s get that absolutely straight. I idolised him when I was a kid growing up and going to the games with my dad and taking our place in the old Jungle. Growing up, I heard all sorts of wonderful stories about this genuine Celtic legend.

When he came down to the Holiday Inn in London to sign me from West Ham in October 1987, he must have realised he wouldn’t have to work too hard for me to agree to the move.