DEDRYCK BOYATA has hit rock-bottom with Hertha Berlin as his new club struggle at the foot of the Bundesliga.

The former Celtic centre-half, who quit the Parkhead club at the end of his contract in June, finally made his debut for the German outfit yesterday – and it ended in the side’s third defeat in four games.

A last-minute goal for Mainz dumped the Berliners into 18th and last position in the league with just one point following an earlier draw. They lost 2-1 and have now conceded 10 goals and scored only three.

Boyata, who won four successive Premiership title at the Hoops, has been battling to overcome a hamstring tear he sustained in the champions’ 2-1 win over Steven Gerrard’s Ibrox side in March. The Belgian World Cup defender limped off before the end of that match and never played again for the club.

After moving for nothing in the summer, the 28-year-old former Manchester City star, who cost Ronny Deila £1.5million, expressed his excitement at a new challenge in another country, but he has been unfortunate with a series of mishaps, including injuring a thigh in training as he prepared for his first appearance. 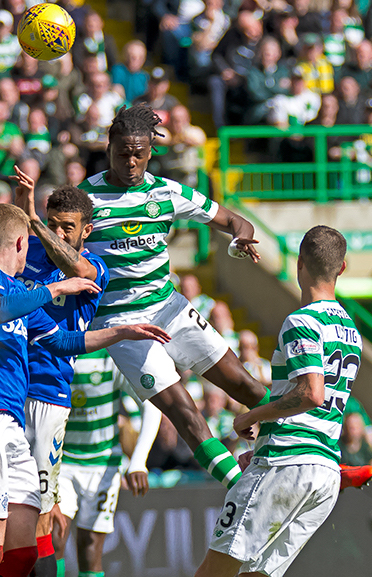 FINAL FLING…Dedryck Boyata heads clear in his last appearance for Celtic in a 2-1 win in March.

His first-team bow was delayed until this weekend and he lasted until the final 10 minutes before being replaced.

Boyata, quoted in a report in the Daily Record, said: “I’m positive, despite the defeat because it was good to get back playing again for me personally.

“But it was a frustrating debut for me bacause we lost a goal in the last minute.

“It’s not good enough for a team like Hertha to be in our position and we need to repair the damage next week against Paderborn.”

The match will be a showdown of the Bundesliga’s two bottom sides with Hertha’s opponents just above them on goal difference.

Boyata’s presence is urgently requited by his club who have already lost 3-0 on two occasions this season to Schalke and Wolfsburg.